by Mayur Agarwal
in News, Telecom

Bharti Airtel, a leading telecom company has now introduced all new affordable tariffs for its 3G customers and has also launched India’s first ever additional data usage Smartbytes packs for Airtel 3G postpaid mobile users. They have added a new 3G pack (snacking proposition) that offers 30 minutes of usage on 3G for over 1 day for Rs. 10. Moreover, the volume based browsing charges on 3G have been slashed down from 10p/10KB to 3p/10kB, effective from 17th May. Smartbytes for 3G lets users enjoy high-speed browsing on their mobile after consuming monthly data transfer limit. 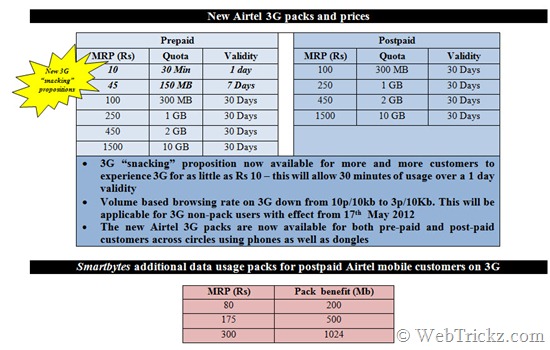 Apparently, Airtel has removed the Rs. 750 plan (4GB limit) and has replaced it with a new Rs. 1500 pack that offers 10GB of data usage with a validity of 30 days. The new Airtel 3G packs are now available for both Pre-paid and Post-paid customers across circles on phones and dongles.

These revised 3G plans look impressive and will surely attract a good audience to move on to 3G. Let’s see when other 3G providers in India follow Airtel footsteps. 🙂

How to Reset Firefox Browser to fix most problems