A lot has been highlighted about the serious vulnerabilities discovered in most versions of Internet Explorer. It is said that this security hole in IE was exploited by hackers in China to pose attacks on Google and other big US companies. 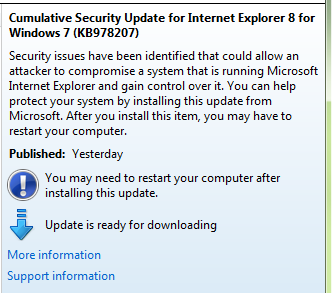 All users using currently supported versions of Windows and Internet Explorer should apply this update as soon as possible. Once applied, you are protected against the known attacks that have been widely publicized. This update will also be available on automatic updates.

You must download this Update now for your desired version of IE & Windows.

Find who Retweeted your tweets & Retweets made by you

Find who Retweeted your tweets & Retweets made by you