Harry Potter and the Deathly Hallows – Part 1 is an upcoming Harry Potter series film, releasing worldwide on November 19th. The movie comes in two parts and forms the seventh and final instalment in the Harry Potter film series. Harry Potter 7 – Part 2 is set to be released in 2D, 3D, and IMAX formats on 15 July 2011.

To enhance your excitement, we’ve picked all the official wallpapers of ‘Harry Potter 7’ movie and compiled them into an amazing theme for Windows 7. Harry Potter and the Deathly Hallows Windows 7 Theme is packed with 9 desktop backgrounds each with a high-resolution of 1920×1200. The wallpapers feature film stars: Daniel Radcliffe as Harry Potter, alongside Hermione Granger, Ron Weasley, Bellatrix, Lord Voldemort, Snape. 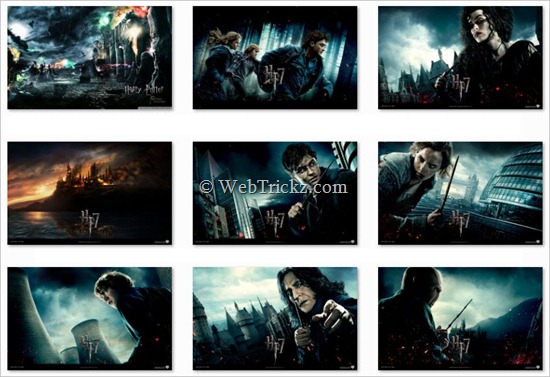 To use this theme, just download and double-click on the theme to apply it. 😉