Flipkart, the major Indian online retailer has raised a massive $1 Billion in its recent funding to become the “mobile e-commerce company of the future.” The users seeking to buy a smartphone in India are currently at rejoice as they’ve numerous options to choose from and that too at a very competitive pricing. Some of the best budget phones are now exclusively available through eCommerce channel like Flipkart in India, such as the likes of Moto G, Moto E, Xiaomi Mi 3, Asus Zenfone 5, etc. Apparently, after the launch of Mi 3 in India at an extremely affordable price tag of Rs. 13,999, other mobile companies are gearing up to either revise or launch their handsets at a similar price. Upon comparing the high-end specifications and features offered by Mi 3, the pricing of Moto G doesn’t seems attractive anymore.

In a move to stay in race, Motorola has decided to slash the pricing of its mid-range phone ‘MOTO G’ by a significant margin. Flipkart, the exclusive retail partner for Moto G will now be selling Moto G at Flat Rs. 2000 Off for both 8GB and 16GB variants. The new price at which Moto G will now be sold is Rs. 10,449 for 8GB model and Rs. 11,999 for 16GB model. Kudos to Motorola for this attempt at the right time!

The Moto G Rs. 2000 Off Discount promotion starts from today midnight at 00:00:01 AM on Flipkart. This is a great opportunity to grab an amazing device at the best price. Don’t miss! 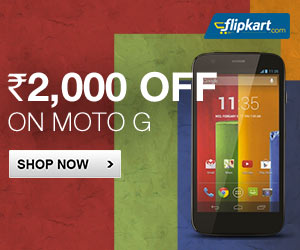 3 ThemeFuse WordPress Themes Up for Giveaway