BitDefender Antivirus Pro 2011 provides comprehensive proactive protection against the latest viruses, spyware, and identity theft attacks, all in a friendly and customizable dashboard. It offers system maintenance and backup, without slowing down your PCs. 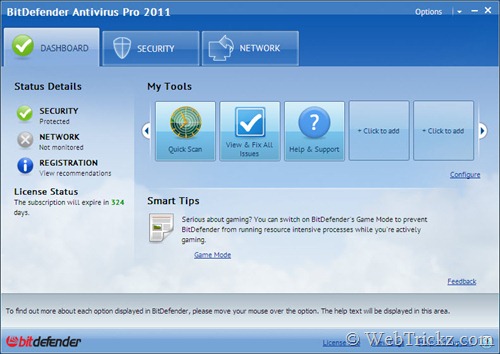 BitDefender 2011 allows you to customise your dashboard to best match your internet security needs and enjoy an interactive user experience.

BitDefender 2011 provides safety ratings for all web sites that may contain spyware or inappropriate content.

BitDefender 2011 detects which applications are slowing down a PC and suggests corrective actions to improve the performance.

Performance Optimiser and Tune Up features in BitDefender 2011 boost speed and responsiveness.

BitDefender 2011 includes new Parental Control features – really important for the parents out there!

Rules to participate in the contest –

Subscribe to our RSS Feeds via Email, and leave a comment below. Make sure to verify your email subscription after subscribing. Also, comment using the same email which you used for subscribing.

Note: Making a comment below is necessary for both the rules. Please don’t Spam!

Tool to Clean Windows 7 MRU Search History in a click

Tool to Clean Windows 7 MRU Search History in a click