How to insert SIM card in LG Nexus 4

LG Nexus 4 is a pure Google Android phone which looks much similar to its predecessor Samsung Galaxy Nexus. Unlike Galaxy Nexus, Google Nexus 4 (E960) comes with a non-removable battery and hence the SIM card placement has been changed too. Just like iPhone and Nokia Lumia 900, Nexus 4 features a Micro SIM (mini-UICC card) sized 15 mm×12 mm which is significantly smaller than the standard SIM card (25 mm×15 mm). The way to insert SIM in Nexus 4 corresponds mainly with iPhone 4/4S/5 and the slot being located on the left side of the phone below the volume button. How to insert or change the Micro SIM card on Nexus 4 – 1. Take out the SIM ejection tool that comes within the package or use a thin paper clip if the SIM eject tool is misplaced. 2. Look for the SIM door on the left side of phone as shown below. 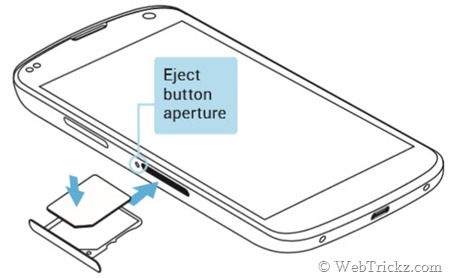 3. Insert the SIM eject tool into the eject button aperture, and push firmly but gently until the tray pops out. 4. Remove the tray and place the micro SIM card inside it, with the contacts out and the angled corner to the right. Push the SIM tray gently back into your phone in same manner until it locks into place. Now power on your Nexus 4 and it should recognize the SIM. 🙂 ~People with a standard SIM card can cut it into a Micro SIM either manually or using a SIM card cutter. You can also ask your carrier to do the needful.