Yesterday, Google officially announced its 3 new flagship devices – Nexus 4, Nexus 10, Nexus 7 3G/HSPA+ and also Android 4.2, a new flavour of Jelly Bean. Both Galaxy Nexus and Nexus 4 may seem to be pretty identical look wise but the Nexus 4, designed by LG has much more to offer. Nexus 4 features Corning Gorilla Glass on the front and back making it scratch resistant, wireless charging and a beautiful back with glittery grid pattern engrossed. Improved specs over Galaxy Nexus include a faster processor, better display, 8MP camera, 2GB RAM, etc. It somehow disappoints as well – No LTE, No user replaceable battery, No 32GB variant plus no microSD card support and the Wi-Fi reception seems limited up to 2.4GHz. Check the specifications comparison below: 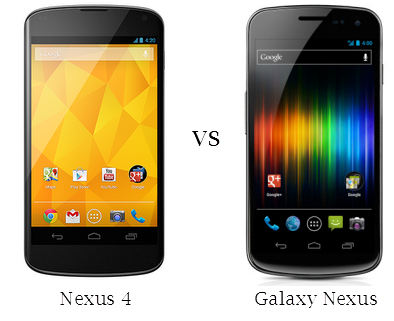