The much-awaited MIUI 6 Stable version is finally released and available for Xiaomi Mi 3 and Mi 4. However, it should be noted that this is China ROM for China Mi 3 and Mi 4, the global ROM will be released later. Though the currently available MIUI 6 stable isn’t a global ROM, interested Mi 3 users in India can flash it even if they’re outside China. The difference would be the presence of some Chinese elements. MIUI 6 is significantly different in terms of looks as it features an entirely revamped UI and several new features. Indian users with Mi 3 running MIUI 5, can manually update to MIUI 6 stable version using our previous guide.

3. Open the Updater app, press the Menu button. Then tap on the ‘Select update package’ option and choose the downloaded ROM (miui_MI3WMI4W_V6.1.2.0.KXDCNBJ_a5a8c41552_4.4.zip). Click on the ‘Update’ option, wait for the update to complete, and then Reboot to finish. 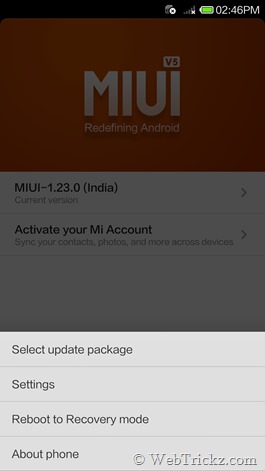 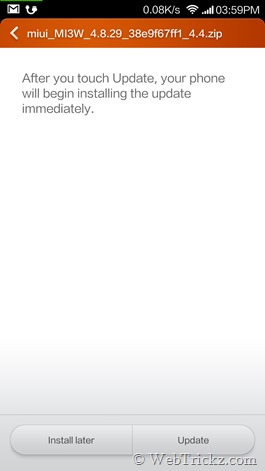 Note: Be patient after reboot as Mi 3 will take a while to boot up.

In case, you’re experiencing errors or application force close issues with the above method then it’s recommended to use Method #2 instead, described here.