This is the time of the year that generally sees the new versions of Motorola phones. We saw weeks ago the launch of Moto G (2015) and it has been a massive hit. Though the phone comes with a slightly older processor, with its key selling propositions like the IPX7 certification and a brilliant battery life backed with a superb camera performance the Moto G 3rd Gen has been doing well. The response is greater when compared to the Moto G (2014) as the phone itself had some drawbacks like weak battery life and nothing special on the looks but Motorola has bounced back. Coming off with such a successful phone, they do not want to hold back anymore on the launch of another successful series, the Moto X. While the Moto X (2014) saw some unique changes to the phone but this year we have as many as 3 variants of the phone. Moto X Style, Pure, and Play. While the first two are almost the same barring the network bands supported, the third is a lower version of the new Moto X and this is what Motorola has launched in India just moments ago. 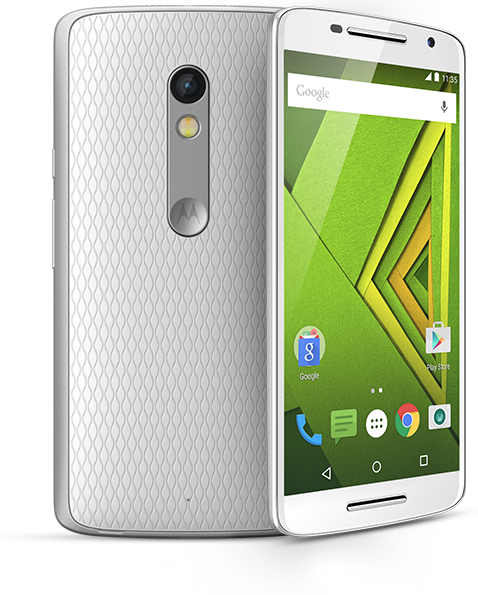 While the Moto X series is meant to be sitting somewhere between the mid-range and the flagships, the Play comes with a 5.5-inch FHD display packing a pixel density of around 403 as compared to the 5.2″ screen found on its predecessor, following the trend of 5.5″ being the norm of a screen nowadays. Adding to the size of the phone is the thickness coming at 10.9mm but thanks to the curved design that fits well into the hands and wont let you feel the bulkiness. However, 169gms is what will make you feel that the phone is a tad heavy but one will get used to it.

Powering the Play is the Qualcomm Snapdragon 615 64-bit Octa-core chipset clocked at 1.7GHz accompanied by an Adreno 405 GPU. This along with 2 gigs of RAM and 16/32 GB of internal memory should see the phone perform decently well as the operating system is as close as it can get to stock Android Lollipop 5.1.1. One need not have to worry about the storage as Motorola will allow for as much as a 128GB micro SD card to house inside the slot for additional memory.

The camera is where you will see a huge bump when compared to the previous generation – a massive 21MP camera with dual-LED flash (dual tone) sit at the back while a 5MP shooter is what you will get at the front.  With ability to shoot 1080p videos the camera performance is what we are very curious to test out!

Powering all of this will be a massive non-removable 3630 mAh battery and given the fact that the phone runs on stock Android which is optimized by Motorola, and also a non 2K screen just like we saw in the Moto G (2015), we are expecting some rock-solid performance around the battery as well. The phone also supports fast charging for the massive battery.

Another specialty of the phone will be the IP52 certification that will keep the phone safe from water by having a special nano technology based coating, by acting as a repellent.

So that is what the all new Moto X Play is about! Coming at a price of 18,499 INR for 16GB and 19,999 INR for 32GB, the Play will go on sale on Flipkart from today midnight with exclusive launch day offers.

We are also told that the higher variant of the Moto X, the Style will be coming soon to India.