The Beta of KAV & KIS 2011 has been released by Kaspersky which you can download now. You might be interested to know the new features which are planned to be added in the upcoming 2011 build of Kaspersky. Check the general overview below: 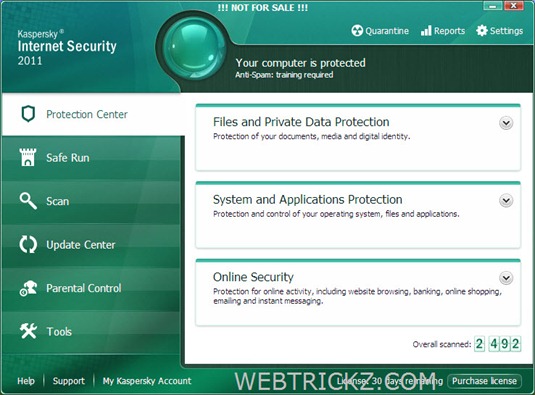 The product will now use both KSN and WoC (Wisdom of Crowd) ratings, when application information is gathered (including HIPS policies)

If the product has detected an error during install:
– The user will be informed of the potential infection and AVP Tool download utility will be offered.
If the product detected previous home version key (for instance KAV found KIS):
– The product will suggest an alternative code to be installed or convert functionality on the fly (KIS <> KAV)
Single downloadable executable installer for both x32 and x64 bit versions.

– The product will verify the image consistency
– Automatic signature update, if not actual
– Support for CD/DVD via built in interface
– Support for bootable USB flash card
– The product now disinfects startup entries, registry, ini files, not only files

– Idle Scan (is launched when certain criterion are met and the computer is idle – launch of resource demanding tasks such as updater, rootkit scanner, system area scan, when the user is not present)

– Collects and saves events from different product subsystems and helps perform analysis for suspicious activities.
– Alerts the user by providing the information needed to make an informed decision (interactive mode of operations)