Samsung and Giorgio Armani has collaborated together to offer a designer and luxurious smartphone. This special edition of Samsung Galaxy S boasts a sexy ‘Giorgio Armani’ logo on top-front and includes most of the features of its predecessor Galaxy S GT-I9000. 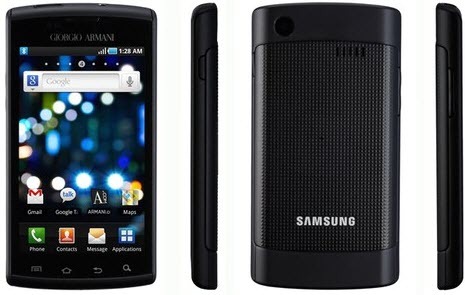 Sleek design, powerful technology and luxury in one smart phone

The Giorgio Armani-designed body of the smart phone comes equipped with a brilliant SUPER AMOLED display that looks great even in direct sunlight and an array of intelligent features, such as integrated messaging, SWYPE for efficient texting on-the-go,  Android market™ and more.

Exquisite Design – The essence of Armani

The Giorgio Armani Samsung GALAXY S provides you with intelligent features to ensure you’re always connected. A Social Hub with integrated messaging incorporates your phonebook, calendar, history and SNS all into one seamless, one-page layout.

The Giorgio Armani Samsung GALAXY S comes complete with Android Market™ and Samsung Apps, so you can choose from countless downloadable applications including utility apps, games, health and lifestyle apps, and e-books. The Giorgio Armani- designed interface provides a selection of exclusive content, including ringtones, fonts and on/off animation for greater personalization and style.

“The long-standing partnership between Samsung and Giorgio Armani has produced a finely crafted handset that reflects the user’s refined tastes. It has been magnificent to see Samsung’s design and technological expertise matched with one of the most prestigious and stylish brands in the world,” said YH Lee, Senior Vice President of the Samsung Mobile Marketing.

Starting December, the Giorgio Armani Samsung GALAXY S will be available in Giorgio Armani boutiques and in major mobile phone stores in Italy and will be gradually rolled out globally in 2011.

The Samsung GALAXY S Giorgio Armani has a rumoured price tag of 700 Euros.