Samsung has been doing well in the flagship segment with the highly successful S7 series and the recently launched Note 7, as well as the budget segment in the form of the J and On series. One of the key reasons for the success especially with that of the budget phones is the ease of availability in the offline stores. Samsung is pushing the ante in leveraging the success by pushing yet another phone into the budget segment, this time around with its homegrown Tizen OS which hasn’t seen much success until now. Earlier today, Samsung unveiled the Z2 phone for a price of 4,590 INR, lets look at what this phone has to offer. 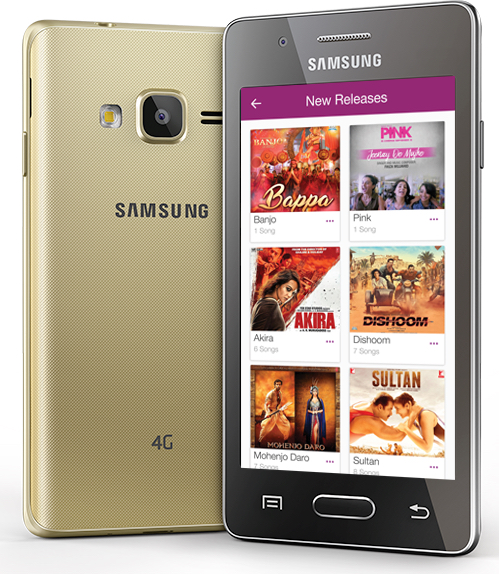 The Z2 comes with a small 4″ display that packs in 800*400 pixels, yes you read that correct, it’s a screen with the resolution with that of a WVGA. The phone looks like an overhaul of the Ace series from back in the day that came in with a small screen. Easy to hold, some amount of metallic ring going around and the iconic home button at the bottom will ensure that the Z2 resembles its Android cousins in the Samsung lineup.

Under the hood, the Z2 sports a Quad-core processor clocked at 1.5GHz with 1GB of RAM and 8GB of internal memory that can be expanded up to 128GB via a microSD. The phone also supports dual SIM cards with 4G support with VoLTE and Samsung has tied up with Reliance JIO for the partner preview offer with this phone which is not a bad option at all if someone wants a phone with JIO offer but wouldn’t want to hurt the pockets much. The phone is powered by a 1500mAh battery.

On the camera front, it has a 5MP camera and a 0.3 MP VGA camera on the front. The phone also comes with S Bike support that we’ve come to see in the J and On series. The phone runs on the latest 2.2 version of Tizen and it will not take the users much time to get adjusted to this as the features are very similar to that of Android.

At a price point of 4,590 INR, the Z2 is a decent offering for folks who’re looking for a secondary phone that is easily available to buy and has good post-sales support. And if one chooses to buy, there is nothing like now as this phone has the JIO partner preview support. It will be interesting to see how the Z2 sells as this would pave way for more Samsung phones with Tizen OS if things go in the direction Samsung intends. You can pick one up from PayTM or any of the local stores if you want one.