At a special event in Singapore today, the Chinese company OPPO announced ‘N3’ which is a successor to N1 launched last year. The Oppo N3 features a motorized swivel camera that’s one of its kind for taking selfies and regular shots as well. The N3 packs a 16 megapixel self-rotating camera with f/2.2 aperture and a sensor of 1/2.3” in size that rotates automatically with a simply flick gesture on the screen. N3 comes with O-Click 2.0 Bluetooth remote control to capture shots remotely that also acts as a medium to adjust the rotating camera’s angle. 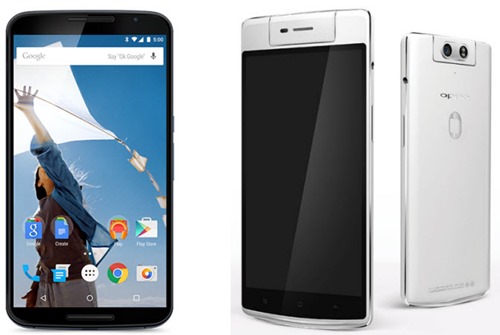 N3 features a fingerprint sensor at the back that helps users protect and unlock the phone with their finger, much similar to Apple’s Touch ID. Just like Find 7, N3 has ‘Skyline’ light at the bottom with double sided notification light for indicating notifications and charging status. N3 comes with a 3000mAh battery with support for VOOC rapid charging technology that is capable of charging the device from 0 to 75% in just 30 minutes. N3 is a dual-SIM LTE phone that accepts Micro SIM and Nano SIM, with support for expandable storage up to 128GB.

The Oppo N3 32GB will retail for $649 off-contract, which is same as the price of recently announced Google Nexus 6 smartphone that also costs $649 for 32GB variant. In this post, you can find the specifications comparison between these two newly launched smartphones – the Motorola Nexus 6 and Oppo’s N3.

Do share if you found the above comparison useful.