by Mayur Agarwal
in Android, How To's, Mobile

The much anticipated Android 2.2 Froyo update is finally released for Samsung Galaxy S I9000 officially in India. The Android 2.2 update is made available for Galaxy S users in India via Kies. The update carries a lot of improvements and new features, of which one cool feature which Froyo brings for SGS is the ability to capture screenshots without rooting the device or using any app. 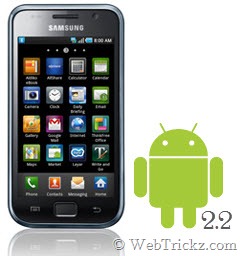 To get the direct screenshot capture feature, you first need to upgrade your Galaxy S i9000 to Froyo. To upgrade – Download and install Kies, connect your phone to the computer, and run Kies. Now check for firmware and you should see the new PDA:JP6 version listed. Run the upgrade process and wait for the device to get successfully upgraded.

To Capture Screenshots directly on Samsung Galaxy S, hold the “Back” button and press the “Home” key. Screenshots will be saved under the Photos folder.

Black Friday Deal – Get 80% Discount on All HostGator Hosting Plans