At an event in Delhi today, Xiaomi finally launched the “Redmi Note” smartphone in India that was initially announced at Mi 3 event in mid-July. This is the 3rd smartphone introduced by Xiaomi in India, after Mi 3 and Redmi 1S. Those interested, the Mi 4 will make its way to India in early 2015. The Redmi Note has been launched in 2 variants – a 3G version powered by MediaTek chipset and a 4G version powered by Snapdragon 400 SoC. The Note will be exclusively available at Flipkart and will go on sale starting 2nd December. Mi India has opted the same flash sales model that requires the buyers to register for purchase a week prior to sale. Redmi Note 3G comes at a price of Rs. 8,999 whereas the 4G version is priced at Rs. 9,999. However, Redmi Note 4G will go on sale in late December. The registration for sale will start at 6 PM, Nov 25th. Redmi 1S will also go on sale tomorrow, probably for last time!

Redmi Note is an affordable phablet with a 5.5” HD IPS display but without a stylus. The 3G model is powered by a 1.7GHz octa-core MediaTek processor with Mali 450 GPU and runs on MIUI v5 Android 4.3 Jelly Bean. It supports Dual-SIM, comes with 2GB RAM, 8GB of internal storage, and support for expandable storage up to 32GB. The device packs a 13MP camera with LED flash, f/2.2 aperture, and 1080p video recording capability. There is a 5MP front-facing camera for selfies. To power this beast, a 3100 mAh removable battery is provided. Connectivity options include: 2G/ 3G, Wi-Fi 802.11 b/g/n, Bluetooth 4.0, GPS, and USB OTG. Xiaomi has implemented an encryption system in the device that would prevent users from using duplicate and fake batteries in it. 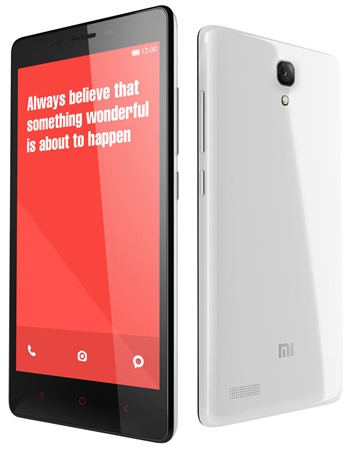 Redmi Note 4G that will be available in India is specifically made for India with dual-band support – both TDD-LTE 2300MHz (Band 40) and FDD-LTE 1800MHz (Band 3). The 4G model is powered by a 1.6GHz Quad-core Qualcomm Snapdragon 400 processor with Adreno 305 GPU. It runs on Android 4.4 optimized with MIUI v5 and supports external storage up to 64GB. The 4G model will be sold online and through Airtel offline flagship stores as well. It should be noted that Redmi Note 4G is a single SIM device.

The Redmi Note comes in White colour, coloured removable back covers should be available. We hope Mi India has sufficient units in stock to meet the consumer demand in India. They’re looking to have more than 100 service centres in India by next year. Make sure to register tomorrow and Buy Redmi Note (3G) when it goes on sale on 2nd December at Flipkart! 🙂