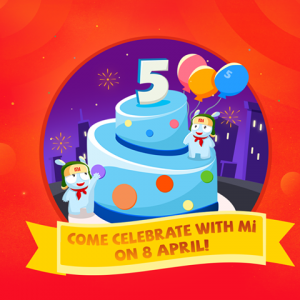 Xiaomi has turned 5 years and wants to celebrate this in a grand way! And why not, for a company just 5 years old, they’ve rocked big sharks like Samsung and Apple off the charts across multiple avenues, at least for some time. They’ve tasted a huge success in India and they’ve changed the rules of the game and set trends for the rest to follow. But the biggest change they made was the mindsets of people – the notion of Flagship Killers. In kicking off the grand celebrations, Xiaomi is throwing parties, giving away gifts to fans, and more importantly lots of changes to the way it will run its show on many things for tomorrow in India, all as a part of the Mi Fan Festival (#MiFanFest) much like a Google Online Shopping Festival.

Following are the list of offers exclusively for Indians:

So looks like Mi India has been working really hard in the last few months to achieve all of the above.

Phew! who would have anticipated this, Xiaomi going all guns with all of the major eCommerce giants in India, throwing away a Mi Power bank! price cut on the Mi 4. While many may whine and complain about having already bought these, there will be much much more who will make use of these deals and walk away happy on Mi Fan Festival and join them in celebrations. This is a good move as it shows Mi really cares for its fans and is ready to bring them in as a part of the celebrations though it will end up making the earlier buyers sad – but that is the way the game works, you get some you lose some. Tell us what you feel about all this and let us know if you have any questions. In the meanwhile, we leave you with a video that Mi India has created to send across a message for you. Watch it here 🙂