by Mayur Agarwal
in Android, FAQ 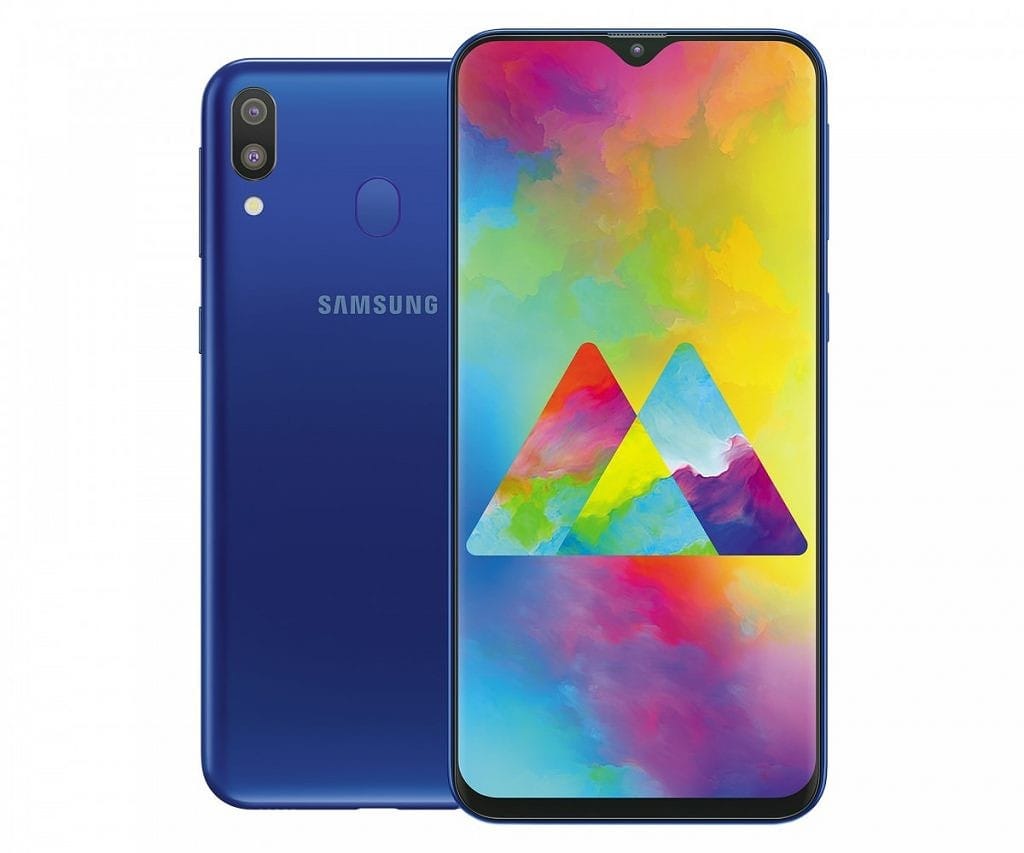 Samsung has finally launched its brand new “M-series” budget smartphones in India, the Galaxy M10 and Galaxy M20. Both the Galaxy M10 and M20 are Samsung’s first phones to feature an Infinity-V display. The company has introduced these refreshing devices to combat the super stiff competition it’s facing from evolving brands like Xiaomi, Asus, Realme, and Honor. Besides carrying a great price tag, both the phones offer an appealing design and some impressive hardware. To make it easier for you, we’ve answered most of the frequently asked questions regarding the Galaxy M20.

1) Does Galaxy M20 come with an AMOLED display?

No, the handset comes with a Full HD+ PLS TFT panel. The Infinity-V display is similar to the dewdrop notch design as seen on devices like OnePlus 6T and Realme 2 Pro. The M20 display offers a 1080 x 2340 screen resolution, 409ppi of pixel density, and a screen-to-body ratio of 83.6%.

The Galaxy M20 comes with a polycarbonate back instead of glass. The plastic back is curved around the edges and carries a glossy finish which is easily prone to fingerprints and smudges.

No, the display of M20 is protected by Asahi Dragontrail glass.

4) What is the available storage space on Galaxy M20?

The handset comes with 32GB and 64GB of internal storage. There is around 50.2GB of free space in the 64GB variant of M20.

Yes, the phone comes with a triple card slot that offers a dedicated microSD card and two nano-SIM card slots. This lets users expand the storage up to 512GB and use two SIM cards simultaneously.

6) Is Notification LED present or not on Galaxy M20?

Due to the presence of a small dewdrop notch that Samsung calls Infinity-V display, the phone doesn’t come with a notification light.

7) Does Galaxy M20 come with Bixby and Samsung Pay?

No, you won’t find Bixby smart assistant nor Samsung Pay on the M20. That’s probably because these features are limited to Samsung’s upper mid-range and high-end smartphones. However, the phone supports navigation gestures similar to those seen in Samsung’s new One UI based on Android Pie.

8) When will the Galaxy M20 get Android Pie update?

As of now, the phone ships with Android 8.1 Oreo with Samsung Experience 9.5 UI on top. However, an Android Pie rollout roadmap shared by Samsung reveals that both the Galaxy M10 and M20 will receive Android 9.0 Pie update in August 2019. The device may also get new One UI skin with this update.

9) What are the benchmark scores of the Galaxy M20?

In the Antutu benchmark, the 4GB RAM variant of the M20 scored around 108000 points. Whereas in Geekbench 4, the handset clocked around 1300 points in single-core and 4000 points in the multi-core test. According to benchmark scores, the brand-new Exynos 7904 14nm chipset powering the M20 is comparatively less or equal to Qualcomm’s Snapdragon 636 processor.

10) Is the battery removable?

No, the battery on M20 isn’t user-replaceable because the handset features a unibody plastic build.

12) Does Samsung Galaxy M20 have a USB Type-C or MicroUSB port?

Unlike Galaxy M10, the M20 features a Type-C port for charging. It’s worth mentioning that it’s one of the few smartphones in its price range to offer such a feature. Additionally, the phone supports USB OTG.

13) Which sensors are included on Galaxy M20?

Thankfully, Samsung hasn’t cut down the sensors on this phone and has been kind enough to pack all the important sensors. The sensors supported by M20 include an Accelerometer, Ambient light sensor, Proximity sensor, Compass, Gyroscope, and rear-mounted fingerprint sensor.

Surprisingly, the M20 natively supports Widevine L1 certification which is required for HD streaming on OTT platforms like Netflix and Amazon Prime Video.

There is no LED flash on the front. The phone, however, comes with an In-Display Flash that along with the 8MP f/2.0 aperture front camera could produce good selfies in low-light conditions.

No, the phone doesn’t support 4K video recording as well as slow-mo video. You can only record 1080p video at 30fps and there is no stabilization available.

17) How is the audio experience on the device?

The Galaxy M20 supports Dolby ATMOS surround sound to amplify the audio while watching videos and listening to music. It should be noted that Dolby Atmos only supports stereo headsets and Bluetooth speakers.

18) Does the smartphone support Dual VoLTE?

Yes, it has dual VoLTE support that allows you to use VoLTE on both SIM cards simultaneously.

20) What are the colour options, variants, and price of the Galaxy M20?

Since the M20 has been launched as an online exclusive, the handset can be purchased either from Amazon.in or Samsung India online store. The first sale starts on 5 February at 12 PM.

With this, we hope to have cleared your doubts and queries.

Fix: Not receiving Aadhaar Card OTP on my mobile number

Fix: Not receiving Aadhaar Card OTP on my mobile number