This is a follow-up post to our previous post that describes how to root Nexus 5 without the need to unlock the bootloader. It’s a commonly known fact that in order to customize a Nexus device, one needs to have an unlocked bootloader. An unlocked bootloader serves several purposes like flashing a custom recovery in order to root your device, installing a custom ROM, using a custom kernel, taking nandroid backups, etc. Unlocking the bootloader using the fastboot command “fastboot oem unlock” wipes the entire device in order to prevent unauthorized users from accessing your data. Fortunately, there is an amazing app ‘BootUnlocker for Nexus Devices’ that bypasses the wipe function and makes unlocking and locking tasks a 1-click job.

BootUnlocker for Nexus is a free app with no ads, that uses root privileges to unlock and lock your bootloader from within Android, without wiping your data. The app performs this severe task with great ease, you can simply toggle between lock/unlock anytime and anywhere, without the need to reboot your device and neither a USB connection nor fastboot is required. This allows you to keep your bootloader locked for security, with this application safely protected behind your lock screen password. The app now lets you change the Tamper flag in a click on devices like Nexus 4 and Nexus 5, which sets a tamper flag if the device bootloader has ever been unlocked or altered.

To Root your Nexus device, follow our post ‘How to Root Nexus 5 & Nexus 4 without Unlocking Bootloader/ Wiping data‘.

After your device is rooted, install the ‘BootUnlocker’ application from Google Play. Run the app and grant Superuser access when it requests. Whenever you want to unlock or relock your bootloader, just run BootUnlocker. 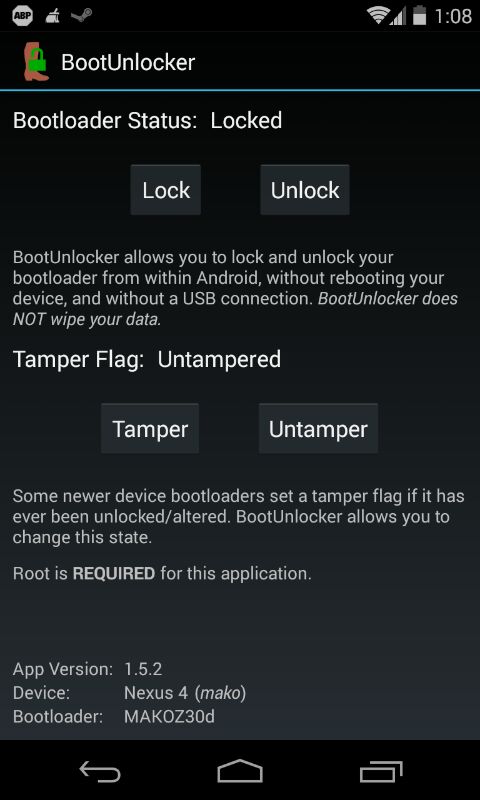 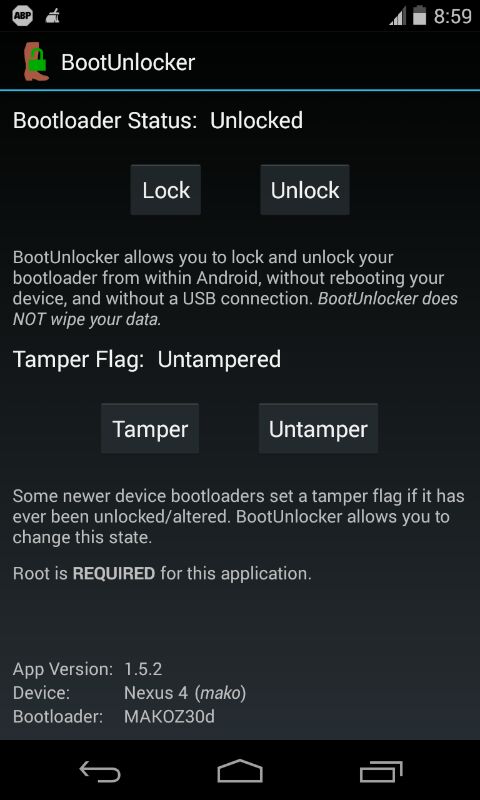 To confirm your device is unlocked, boot into fastboot mode and check the lock state. Alternately, look for the lock icon on the Google screen while the phone is booting. Hope you found this trick useful.