A while back at CES 2017, Asus unveiled two high-end smartphones – Zenfone AR and Zenfone 3 Zoom. It’s not yet known when either of the two phones will make their way to India but for now, Asus has decided to launch a new variant of Zenfone Max. The Zenfone 3s Max (ZC521TL) announced today is an upgraded version of Zenfone 3 Max that was launched in November last year. Apparently, the siblings share similar specifications and features but the main highlight of the 3s Max is its 5000mAh battery as compared to 4100mAh on the Zenfone 3 Max. The 3s Max also comes with a significantly different design when compared to its cousins from Zenfone 3 series. We’ve been using the 3s Max for a few days now and are here to share our initial impressions with the device. 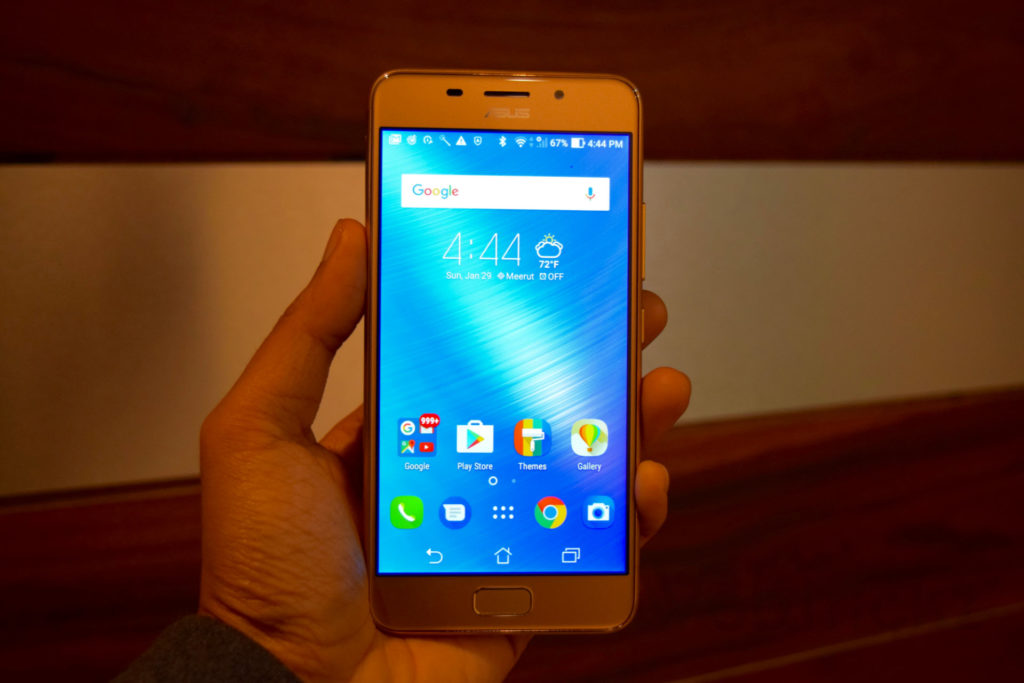 Design gets a makeover

Though the highlight of the Zenfone 3s Max is its massive 5000mAh battery, the revised design plays a crucial role apart from the battery capacity. In terms of design, the visible changes include a physical home button on the front with an integrated fingerprint sensor. Surprisingly, Asus has ditched its traditional non-backlit capacitive keys on the 3s Max and has replaced them with on-screen navigation keys. Apparently, the Zenfone 3s Max is the first phone from Asus to feature on-screen buttons which is a wise move in our opinion.

The 3s Max comes with a metal unibody featuring a smooth silky finish across the back that feels premium and solid in nature but can be slippery at times. It comes with a 5.2-inch HD IPS display with 2.5D glass which also is an ideal screen size for most users. The phone has rounded corners and the back is slightly curved towards the edges, thereby offering a good grip and making it comfortable to hold. As compared to its sibling Zenfone 3 Max, the 3s Max sports bottom-firing speakers, and the camera here is positioned at the top left. The top side seems to secretly house one of the antenna bands which looks neat. Asus branding is there on the front and back, along with basic sensors including a LED notification light. The Hybrid Dual-SIM tray is on the left side that accepts micro SIM + nano SIM or microSD card.

Though the handset feels a bit heavy due to the presence of a large battery and metal build, it doesn’t look chunky. The phone weighs 175 grams and is 8.8mm thick.

Talking about the technical specs, the Zenfone 3s Max is powered by an Octa-core MediaTek MT6750 processor clocked at 1.5GHz with Mali T-860 GPU. The 5.2″ HD IPS display is very bright and crisp with good color reproduction and viewing angles. The phone runs on Android 7.0 Nougat out of the box. Under the hood, it packs 3GB of RAM and 32GB of internal storage (23.65GB usable storage) that is expandable up to 2TB via a microSD card. In terms of connectivity, it supports dual-band Wi-Fi, 4G LTE with VoLTE, Bluetooth 4.0, and GPS.

There is a 13MP primary camera with f/2.0 aperture, real-tone dual-LED flash, PDAF, and support for 1080p video recording. In our short test, the camera performed fairly good but image processing takes pretty long which seems a software issue. We’ll cover it in detail in our full review. On the front is an 8MP camera with an 85-degree wide-angle lens. The camera UI has several modes such as Manual mode, HDR, Super Resolution, Low light, Beautification, Time-lapse, etc.

The front-facing fingerprint sensor doubles up as a home button and lets you register up to 5 fingerprints. The fingerprint scanner looks fast and accurate but doesn’t allow locking specific apps which can be done using a 3rd party app. The speaker grille at the bottom produces loud sound and users can further use the Audio Wizard app to improve the audio experience.

Running on ZenUI 3.0 based on Android 7.0 Nougat, the software changes include: bundled notifications, split-screen or multi-window mode for better multitasking, revamped settings menu, etc. besides other Asus customized settings like Game Genie and ZenMotion. There are pre-installed apps such as Facebook, Messenger, Instagram, and Duo besides the standard ones from Asus and Google.

The original Zenfone Max and its upgraded version, both carried a 5000mAh battery inside which was the key aspect of the phone. However, the Zenfone 3 Max was launched with a smaller 4100mAh battery which was quite surprising. Asus is now back to the basics by introducing Zenfone 3s Max which comes equipped with the good old 5000mAh battery. This massive size battery can easily power up the phone for more than a day under heavy usage and for two days under normal usage. We’ll find out about the actual battery life in our battery tests. The 3s Max supports reverse charging and doubles up as a power bank to charge other devices on the go. The phone ships with a 5V 2A charger which doesn’t support fast charging and it seems the phone itself doesn’t support fast charging natively which is a bit disappointing.

There are 5 intelligent power modes to further extend the battery life that can be customized as well as per the user’s need. The power saver has the following modes: Performance mode, Normal mode, Power saving mode, Super saving mode, and Customized mode.

The pricing of the Zenfone 3s Max isn’t known yet but it should be priced somewhere around 13-14k INR considering the pricing of its elder sibling Zenfone 3 Max. The device specs do look short on paper when compared with the likes of Redmi Note 4, Coolpad Cool 1, and Honor 6X; all of which sport a dual-camera setup and Full HD display and fall in the similar sub-15k price segment. However, the Zenfone 3s Max serves a completely different purpose by offering an elongated battery life in addition to a decent performance and good software. The phone looks beautiful and its HD display is impressive too. We liked the front placement of the fingerprint sensor here, which is usually placed at the back on most phones in competition except the Moto G4 Plus. The 3s Max should be a desirable choice for users looking for an affordable smartphone with promising battery life, feature-rich UI, and a good build.

The phone is expected to launch in India on 7th February. We will cover other aspects of the phone later in our detailed review. Stay tuned!