CopyTrans, one of our dear sponsor and the producer of best iTunes alternative for iOS devices has now introduced a major and much anticipated new feature “Apps support” to their free iTunes alternative ‘CopyTrans Manager’. This brand new amazing feature lets you simply transfer apps from PC to your iPhone, iPad, or iPod touch without requiring iTunes. Best thing is NO Jailbreak is needed to accomplish such complex task.

CopyTrans Manager is a free, light and efficient alternative to iTunes that offers the ability to quickly transfer data such as music, videos, podcasts and applications to your iPhone, iPad, iPod Touch and lets you manage them. It doesn’t requires any installation, offers drag & drop support, and instantly Syncs the transferred stuff to iOS device. With the new version, you can add/sync Apps (.ipa files) to any iPhone by simple drag and drop without iTunes and jailbreak. 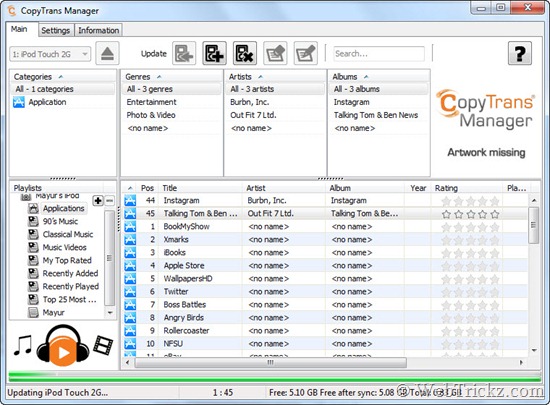 Transferring Apps to iPhone – If you don’t prefer using iTunes to install apps on iPhone, then do it easily using CopyTrans Manager. To do so, just download the apps from App Store via iTunes. Then navigate to the directory “C:\Users\User\Music\iTunes\iTunes Media\Mobile Applications” on your Windows PC to access the downloaded apps. Next, connect your iPhone to PC, run CopyTrans Manager and drag the app’s IPA file to Applications in CopyTrans. Hit the ‘Save changes’ button and you are done.