Centric A1 Review – A worthy performer in its segment 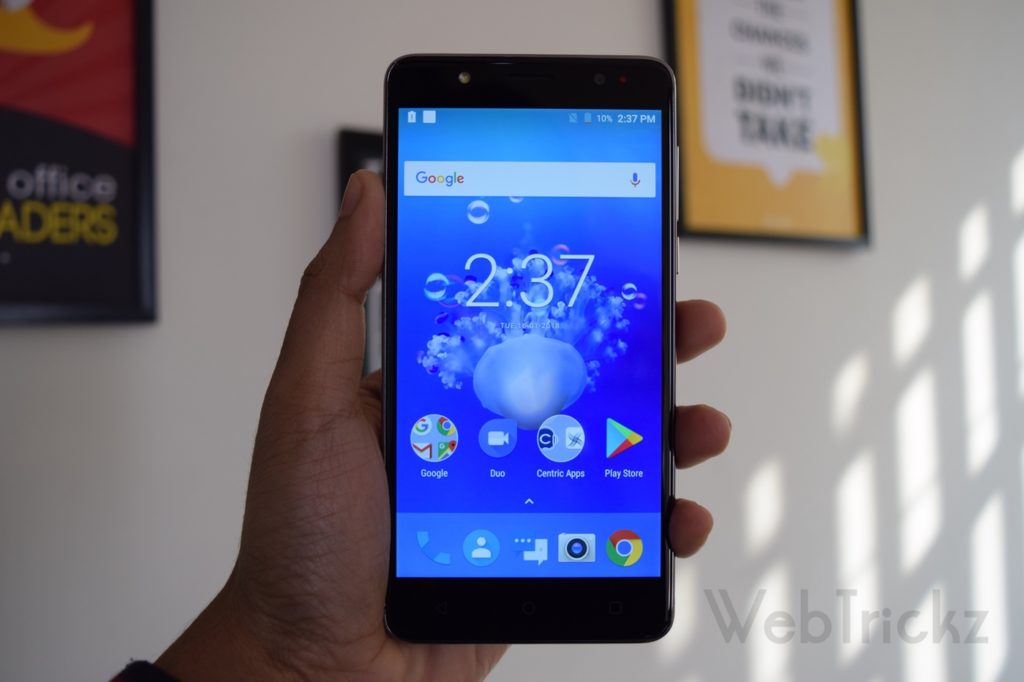 Centric, a subsidiary of Priyanka Telecom and a domestic smartphone maker introduced their mid-range phone “Centric A1” back in November. Launched at Rs. 10,999, the Centric A1 targets budget-conscious buyers and competes with the likes of Lenovo, Motorola, Xiaomi, and Micromax. All these popular brands offer some really good smartphones with promising specs and at affordable pricing. Featuring a Snapdragon chipset, Full HD display, Fingerprint sensor, and Quick Charge 3.0 support, it’d be interesting to see how this newcomer fares in such stiff competition. Without further ado, let’s find that out in our detailed review of Centric A1.

The build and design of Centric A1 are similar to other phones in its price range such as the likes of Coolpad Note 5 Lite and Redmi Note 4. The phone features a metal unibody design, while the top and bottom portions across the back carry a plastic build with an identical metallic finish. These covers apparently hide the antenna bands. Featuring curved edges and rounded corners, the Centric A1 looks solidly built and feels premium in hand. Also, the device is just 7.8mm thick and is pretty lightweight, thus making it comfortable for prolonged usage. There are sizeable bezels though and non-backlit capacitive keys are provided for navigation. A notification LED is also included.

Talking of physical overview, the metallic volume rocker and power key are on the right side while the Hybrid Dual SIM tray sits on the left. The top houses the headphone jack whereas the speaker grille and Type-C charging port are at the bottom. On the back, there is a protruding camera with an LED flash followed by a fingerprint sensor, all of which are aligned symmetrically. Overall, the design is impressive. 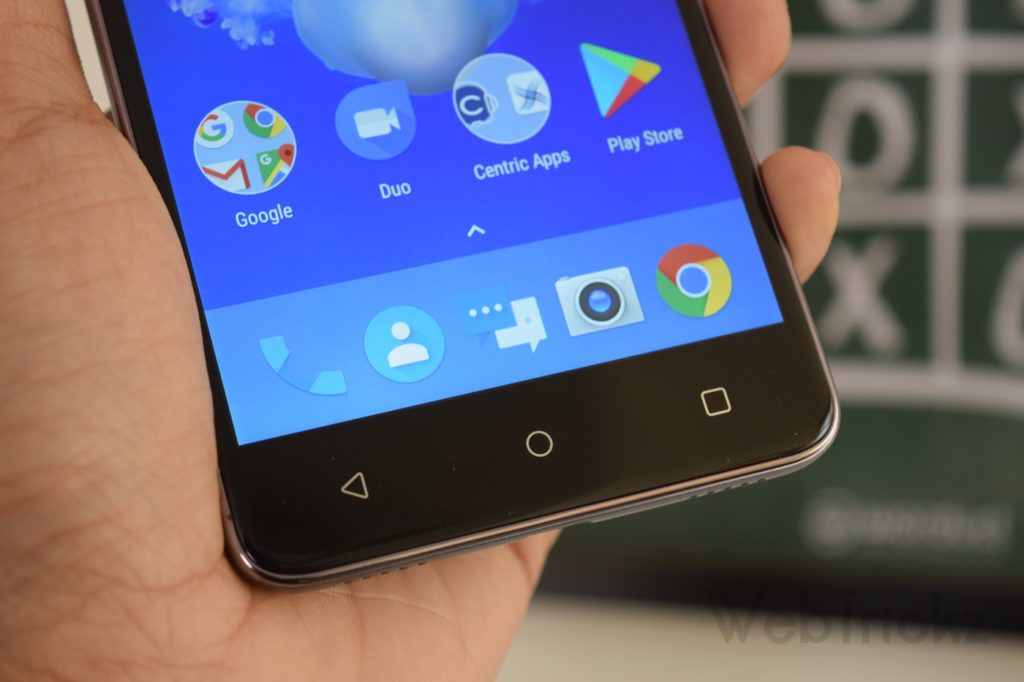 The Centric A1 sports a 5.5-inch Full HD IPS Incell display with 2.5D curved glass. The display has a resolution of 1920 x 1080 pixels at 401ppi and features Dragon trail glass protection. The display looks very bright, crisp and produces accurate colours without any oversaturation. The viewing angles are decent and visibility under direct sunlight is very good. It comes with an Ambient display option that wakes the screen when you receive app notifications. Given its price, the device display doesn’t disappoint.

Unlike most Chinese smartphones, the Centric A1 runs on Android 7.1.1 Nougat with a near Stock Android experience. There are barely any customisations, though a decent amount of bloatware exists in the form of pre-installed apps such as Microsoft Office apps, SwiftKey keyboard, MoboPlayer, Centric apps, and a few duplicate apps exist for music and browser. Several quick gestures for instant control are included such as a three-finger screenshot, region screenshot, double-tap to wake, and draw symbols to launch certain apps. In our experience, the UI looks clean but tends to lag.

Powering the Centric A1 is a 1.4GHz Snapdragon 430 Octa-core processor with Adreno 505 GPU, a popular chipset among sub-10k Android phones. This is coupled with 3GB of RAM and 32GB of internal storage that can be expanded up to 256GB using a microSD card. In terms of performance, the phone runs fairly smooth except for occasional lags and is capable enough of handling everyday tasks with ease. Multitasking isn’t an issue but apps do take a bit longer than usual to load.

The A1 performs well in gaming and runs low-end games smoothly, however, high-graphics titles see occasional frame drops and stutters but don’t cause heating issues whatsoever. In benchmark tests, the device clocked 45894 in Antutu and 2523 in Geekbench 4 multi-core test.

We found the vibration feedback while typing to be poor. The bottom-facing speaker is quite loud and clear but audio distortion occurs even at normal volume and the DTS Sound app doesn’t help either. Overall, the audio experience isn’t great, though is acceptable at this price point. Coming to the rear-facing fingerprint sensor, it’s convenient to use and fairly accurate but isn’t very fast at unlocking. Connectivity options offered are 4G with VoLTE and ViLTE, Wi-Fi 802.11 b/g/n, Bluetooth 4.0, GPS, and FM Radio. 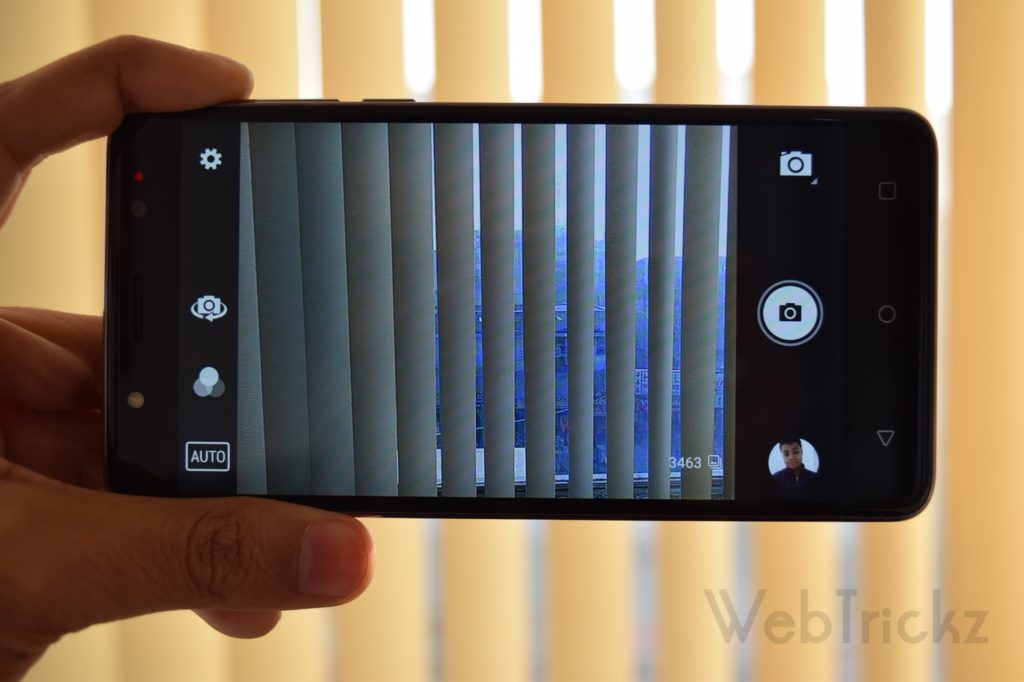 The Centric A1 sports a 13MP rear camera with autofocus and dual-LED flash while the front camera is an 8MP shooter with LED flash. The camera app offers a lot of options, including the ability to manually adjust the ISO, exposure, and white balance. It also offers various filters and shooting modes such as HDR, Beauty mode, Portrait, Backlight, Sunset, and Night mode. The app, however, doesn’t show basic options like flash mode and countdown timer on the main screen.

Speaking of image quality, daylight shots look fairly good without any oversaturated colours but lack sharpness, and images tend to appear washed out and overexposed most of the time. The phone also takes a good amount of time to process details when viewing photos inside the gallery. Low-light photos depict a high level of noise and miss out on details. The front camera is overall an unimpressive affair. Selfies taken in outdoor lack details and have blown highlights while indoor ones exhibit a lot of digital noise. In low-light, the front flash helps but outputs similar results.

Overall, we found the camera experience to be average. Below are a few camera samples for reference.

The phone comes equipped with a 3000mAh non-removable battery which looks promising on paper but delivers an above-average battery backup. Under low to moderate usage patterns, the phone manages to run throughout the day. However, on busier days involving resource-hungry tasks, you might need to charge the phone during the day. To give an idea, in our Full HD video loop test, the battery drained by 13% in around 70 minutes. Thankfully, the Centric A1 features fast charging support via QuickCharge 3.0 which isn’t common given its pricing. Using the bundled 18W fast charger, the phone took about 1.5 hours to charge from 0 to 100 percent.

Currently priced at Rs. 9,999, the Centric A1 offers a good value for money but the device makes a few compromises which though aren’t major but could hinder the overall user experience. We really appreciate factors like good build and design, quality display, capable performance, and a bloat-free software experience. However, the phone disappoints with its camera performance which is average at best. Moreover, the sound quality and battery backup aren’t good enough to meet our expectations. If such issues aren’t a dealbreaker for you, then Centric A1 should definitely be a considerable choice in this price range.