Like many other smartphones, HTC One also ships with an unlocked bootloader which interested users can unlock easily as HTC allows their bootloader to be unlocked. However, the process to unlock the bootloader on HTC One requires one to go through various steps, and unfortunately, it isn’t a single command task unlike on Nexus devices. But overall the entire unlocking process is quite easy as you proceed step by step. We’re covering this tutorial for Mac users as such guides aren’t widely available and most people believe that doing such tasks is very difficult on MAC. Surprisingly, the unlocking task is rather easier on Mac OS X than Windows. That’s because on Mac you don’t need to install and configure ADB or Fastboot drivers which itself is a crucial step on Windows. Also, you don’t need to install Android SDK or anything else on Mac. 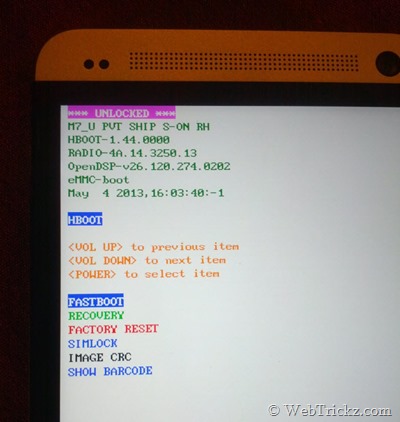 Why Unlock Bootloader? Unlocking the bootloader offers the ability to customize the software on your device. It removes the restriction to modify device software and opens the possibility to install a custom ROM, Root device, use a custom kernel, etc.

NOTE: Unlocking the bootloader will Wipe/ factory reset your device, and will delete all personal data from your device such as apps, photos, messages, and settings.

Disclaimer: Unlocking may also void your device warranty. Be sure before proceeding!

1. Make sure you’ve taken a backup of your entire device data.

2. Download the file ‘htcone-fastboot.zip’ and extract it to a folder.

3. Copy the ‘htcone-fastboot’ folder to your Home directory in Finder.

5. Proceed with the below steps in stated order –

6. Now “Power off” the device. Then press the Volume Down + Power button simultaneously to start the device into Bootloader mode (HBOOT). 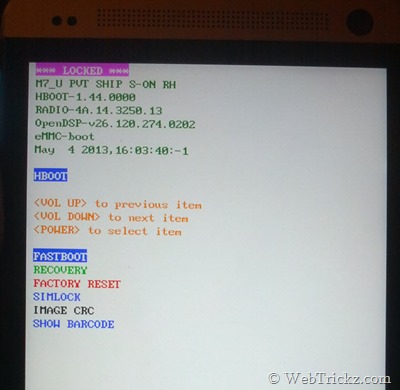 7. Use the Volume buttons to navigate up or down. Highlight Fastboot and press the Power button to enter into Fastboot mode.

8. Connect the device to the computer via a USB cable.

9. Open Terminal on Mac (Applications > Utilities). In the terminal, type the following lines of code after the $, hit return (enter) after each line. In the second line, type your user name as seen in Finder, and without the brackets. Refer to the below image:

10. You will now see a long block of text in the terminal. Copy the Identifier Token by highlighting the text exactly as shown above. (Right-click and copy)

11. Now move back to the HTC webpage and scroll down to Step 10. Then paste the copied string of text into the token field (Delete the INFO text if it also gets paste). 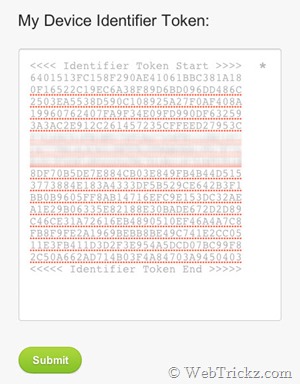 12. Hit ‘Submit’ and if the device token is correctly entered, you should see a ‘Token submitted successfully’ message. Now check your email and you should have received an unlock code binary file (Unlock_code.bin) as an attachment from HTC.

13. Download the Unlock_code.bin file and paste it into the htcone-fastboot folder.

15. A screen titled ‘Unlock Bootloader’ will appear on your phone. Select ‘Yes’ to unlock (use volume keys to navigate and power key to make your selection). 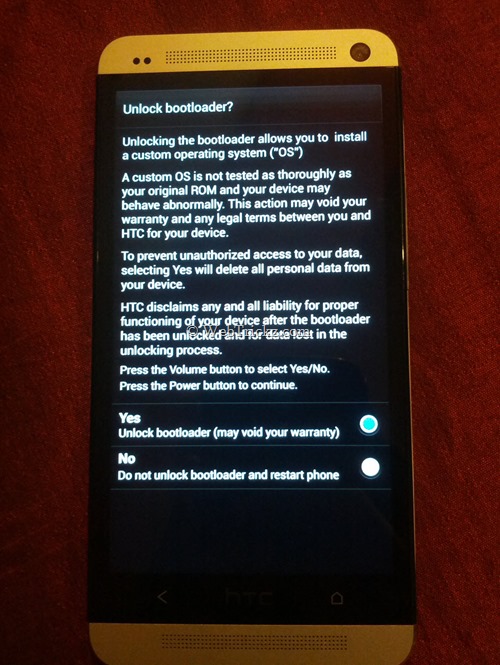 After a few seconds, your device will reboot automatically with an unlocked bootloader. You can confirm that by rebooting into the bootloader and checking the lock status at the top.

To re-lock HTC One bootloader, in the terminal, type: ./fastboot-mac oem lock

Note: This will not restore the factory default lock, but will simply re-lock the bootloader so no further changes can be made. Perhaps, if you wish to unlock your bootloader again, simply follow the above steps and use your original unlock key file to unlock your phone again.

Hope you found this guide useful. 🙂

How to Root HTC One & Install Custom Recovery using Mac

How to Root HTC One & Install Custom Recovery using Mac