Xolo, a subsidiary of Lava mobiles is a brand based out in Noida that started its operations in 2012. The company is known for launching the first Intel processor smartphone in India and was one of the first brands to launch a dual-camera phone in India, the Xolo Black. A few years back, Xolo introduced the Era series which is targeted towards users looking for a budget phone and is new to smartphones. The Era lineup includes devices priced under Rs. 10,000 and are available only through eCommerce platforms, including Flipkart, Snapdeal, and Amazon. 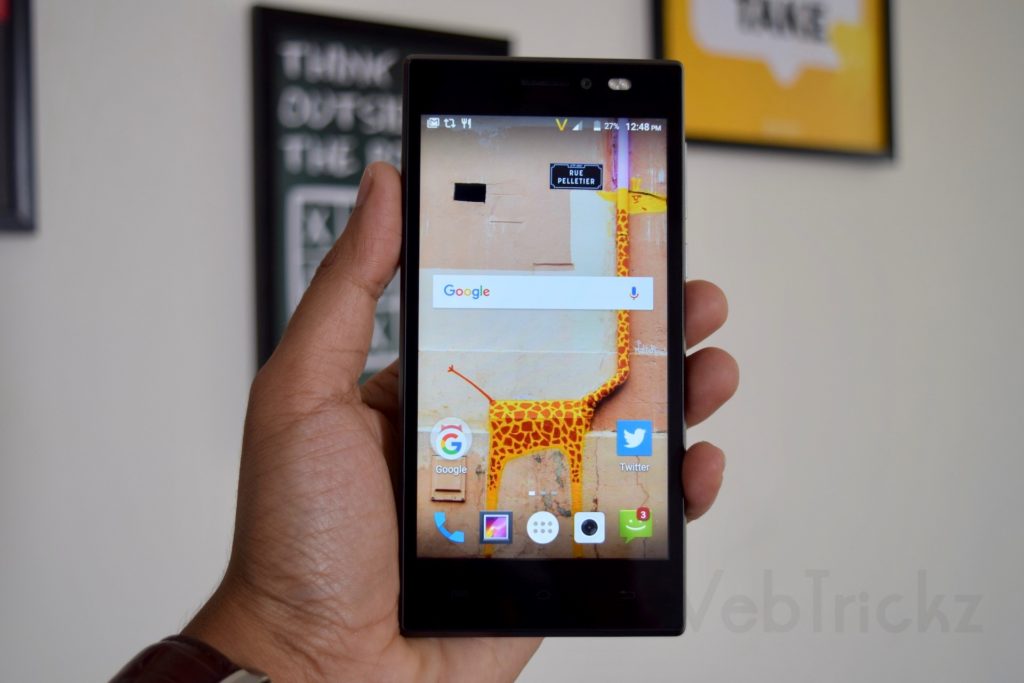 A while back, Xolo launched its latest budget phone “Era 1X Pro” with 4G VoLTE support for consumers seeking an entry-level handset. The Pro edition of Era 1X retains the same design as its predecessor, Era 1X. The only notable changes include the improvement in memory and storage in addition to VoLTE support. That said, does the Xolo Era 1X Pro manage to go that extra mile which is usually unexpected from such affordable offerings? Let’s find out in our review. 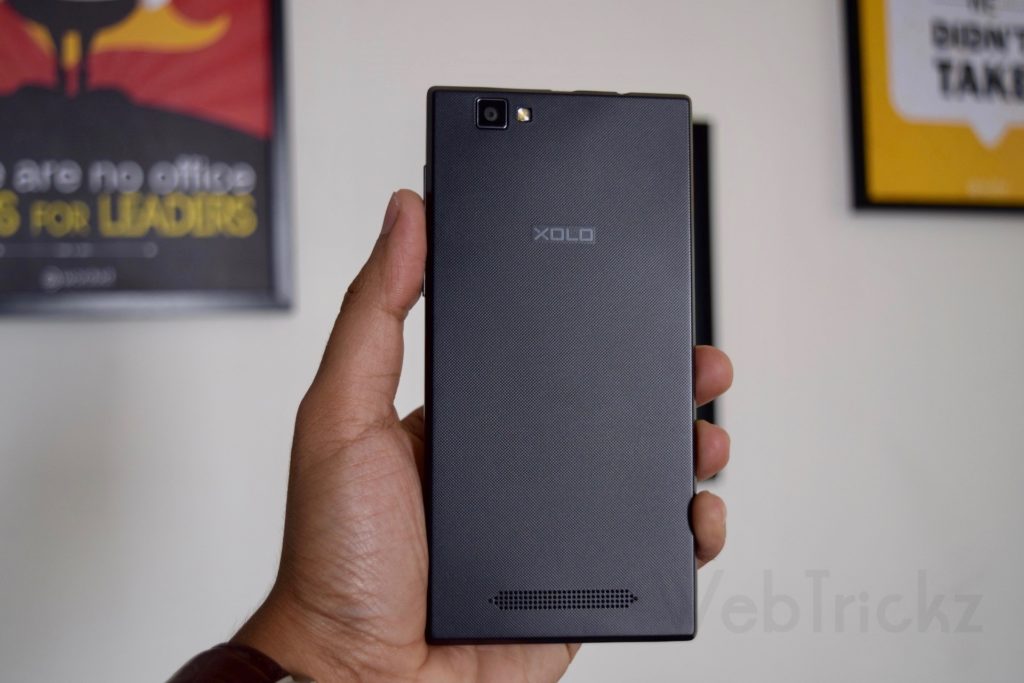 The Era 1X Pro doesn’t look or feel like a budget phone in terms of design and build. It rather looks quite premium considering it’s priced below Rs. 6,000. The handset sports a boxy form factor and has squared corners which make it less comfortable to hold. The device is primarily made out of plastic but looks reasonably durable nonetheless. The entire sides feature chamfered edges across the front and back with a metallic strip fused between them that shines out. The back cover with a matte finish features a nice texture that makes for a good grip and is easily removable using the provided indent.

On the front, the bezels take a notable amount of space and the dual-LED flash for selfies is clearly visible. The non-backlit capacitive buttons at the bottom are difficult to spot in dim lighting. The squarish power and volume rocker on the right side offers nice tactile feedback. The top side houses the 3.5mm audio jack and micro USB charging port. Moving to the back, there is a square-shaped camera and LED flash along with Xolo branding, followed by a speaker grille at the lower bottom. Removing the back panel reveals the slot for a Dual SIM card, microSD card, and the battery is user-replaceable.

Overall, the phone looks good with a smooth matte finish and feels lightweight. Comes in Black and Gold color.

The Era 1X Pro ships with a 5-inch HD IPS display with a resolution of 720*1280 pixels at 294ppi. The display quality is pretty impressive at this price point. The screen is flat without any sign of 2.5D curved glass due to obvious reasons. The display looks bright enough and outdoor visibility is not an issue. We found the color reproduction to be very good as the colors look accurate without any over-saturation. The content appears fairly sharp and viewing angles are decent too. The touch response, however, is average and the lag is easily noticeable while navigating across or tapping the app icons. Also, the phone only supports two multi-touch points which could be an issue while gaming. 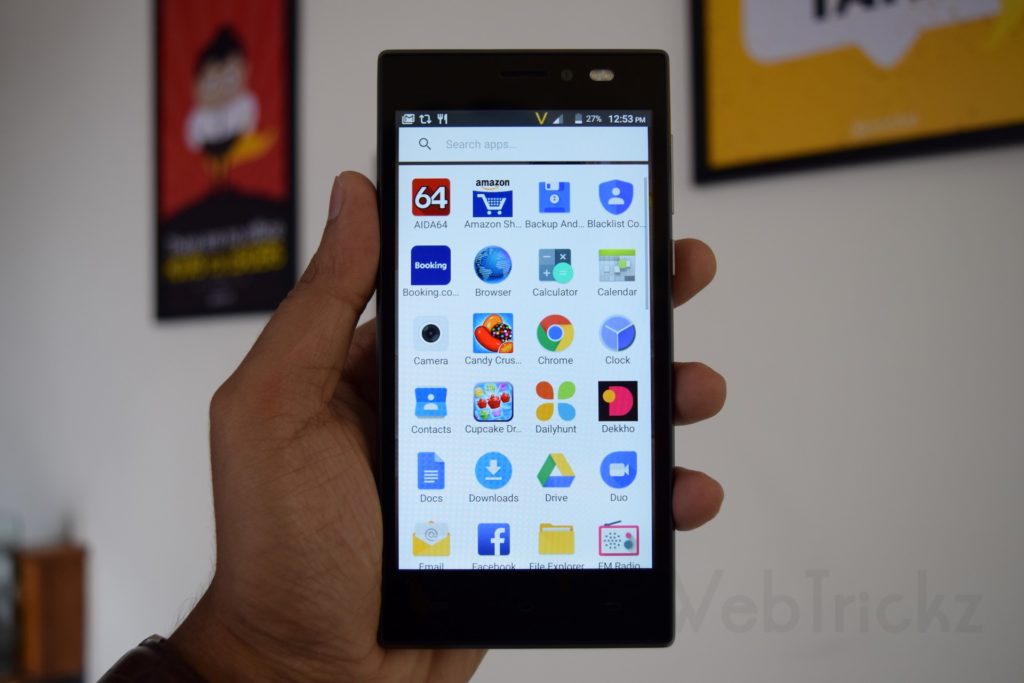 The device runs on Android 6.0 Marshmallow with a May security patch. What’s noteworthy is the fact that it comes with Stock Android UI which we personally like as we’re not a fan of custom UIs seen on most Chinese phones. The UI is light and user-friendly but the ton of bloatware makes it less effective. A lot of apps come pre-installed, including Amazon Shopping, Backup and Restore, Booking, Dailyhunt, Gaana, Hike, NewsPoint, Xender, and Yandex. Fortunately, most of them can be uninstalled if required.

There are a few customizations such as Smart awake having options like double click to wake and using draw gestures to open specific apps. The Assistant smart feature adds a virtual control panel on the screen for navigation and opening apps. One can also switch the audio profiles and schedule power on and off.

The Xolo Era 1X Pro is powered by a 1.5GHz Quad-core Spreadtrum SC9832 processor, paired with 2GB of RAM and 16GB of internal storage. Despite running near Stock Android, the performance is just average. Under regular usage, we often noticed visible lags and the operation wasn’t smooth. The phone doesn’t feel fast enough and multitasking isn’t so quick. Switching between apps is slow and apps take longer than usual to load. As expected, the device is capable of running low-end games like Temple Run, Fruit Ninja, and Super Mario Run with ease but high-end games like Asphalt 8 are almost unplayable.

Sensors onboard include Accelerometer, Proximity, and Light sensor. The rear-facing loudspeaker isn’t loud enough and produces decent sound quality. USB OTG is not supported but one can expand the storage up to 32GB using a microSD card.

That said, the phone is good for performing basic tasks and its limited performance shouldn’t obstruct first-time smartphone buyers, especially those upgrading from a feature phone. 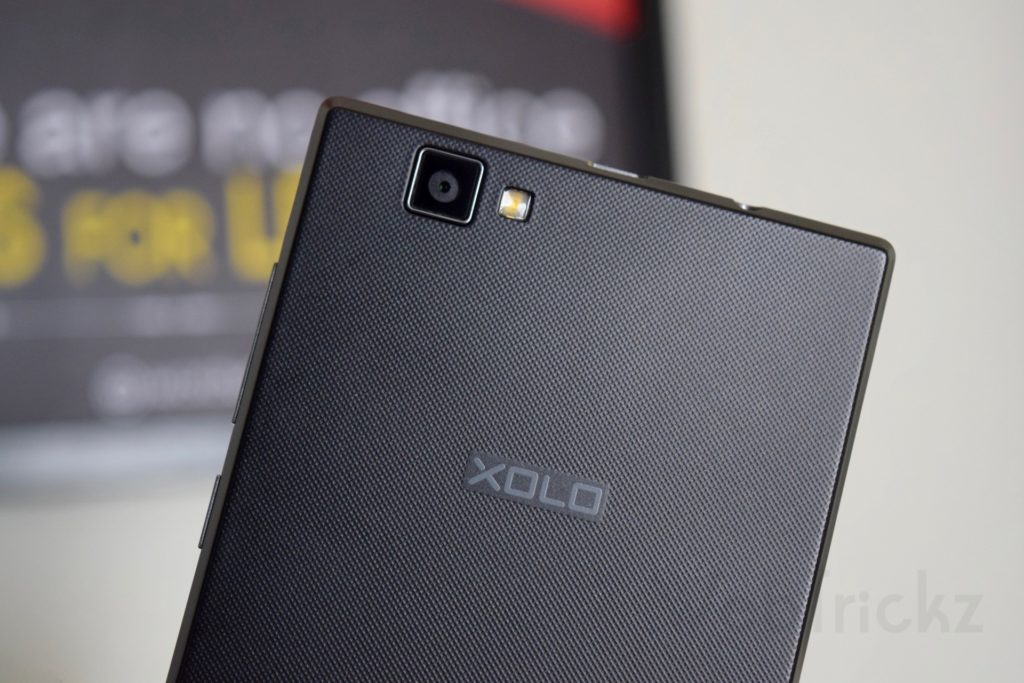 Xolo touts the dual-LED flash on the front as the highlight of the Era 1X Pro but the overall camera package is disappointing. An 8MP shooter with autofocus sits at the back and a 5MP shooter on the front. The camera app is feature-rich with lots of settings and shooting modes such as HDR, Pro mode, Burst, Live video, and more. Speaking of image quality, the photos lack details and look overexposed at times even when captured in broad daylight. In any given condition, the camera is slow as there is a shutter lag of 3-4 seconds which is annoying and hence one usually ends up taking blurred images. As a result, we had to keep our hands very steady in order to capture clear and blur-free pictures.

Photos taken in indoors often look washed out whereas low-light shots exhibited a lot of noise and those with moving objects were distorted. The rear camera supports 1080p video recording and offers modes like Timelapse and Slow-motion. Surprisingly, the videos recorded came out good enough with quick auto-focusing and we were able to zoom in while recording.

The front camera equipped with dual flash can take fairly good selfies in daylight. However, selfies taken in indoors look grainy and overexposed while those taken in low-light with flash enabled appear too bright with muted colours.

One usually expects a budget phone to deliver a promising battery life but that’s not the case with Era 1X Pro which packs a 2500mAh battery. The phone fails to last an entire day under normal usage but can last for over 12 hours under a low to moderate usage pattern. The situation gets tougher with intensive tasks like prolonged 4G usage, music playback, and frequent access to routine apps, where the device tends to run out of juice in approximately 8-9 hours. In our test, the device reached 41 percent of battery level in 70 minutes when charged from a powered-off state using the supplied 1A charger. Overall, the battery life is sort of underwhelming.

Summing up, every low-budget phone comes with an array of downsides and the same applies to Xolo Era 1X Pro. The device misses out on the essential aspects that one looks at in every smartphone, i.e. the camera, performance, and battery life. We do stand by its design, display, software, and performance (up to a certain extent) but that alone isn’t enough to impress the end-user and compete with other entry-level contenders. Available at a price of Rs. 5,777, the Era 1X Pro could make an ideal choice for first-time Android buyers with a limited budget but classifies as an underdog for power users.