See how to mark text and images as a spoiler on Discord app.

by Jay Mehta
in Apps, How To's

Discord is a popular IM client used by gamers, Redditors, Patreon creators to chat and share media. It rose to popularity in the past few years owing to its success in the game streaming community. The app is featured among several lists of top 10 messaging apps in the world. Yes, it’s that good.

The developers behind Discord have been adding new features to it after listening to user feedback. The latest among them is the addition of “Spoilers”. Spoilers are hidden messages which can be seen by clicking on them. Users usually use them to share something without spoiling the fun or suspense for others in a group. For example, the climax of a movie, a twist in a book, etc. In the new update, users can put spoilers on Discord in the messages they send.

Here’s how you can add a spoiler tag on Discord on a desktop client, Android, iPhone or iPad.

How to Use Spoiler Tags on Discord

There are two other methods to use spoilers on Discord using a computer.

On Android and iOS

This is a universal method for both Android and iOS apps of Discord. 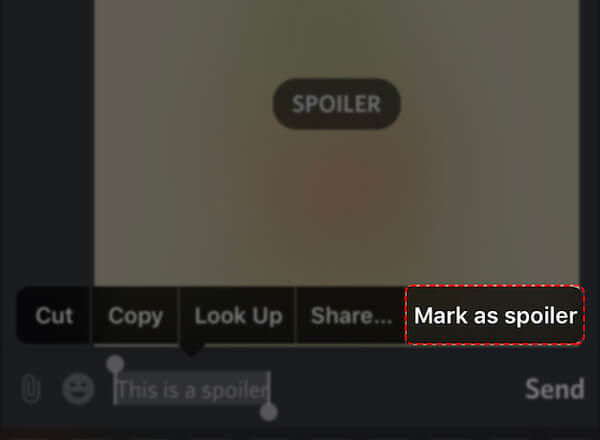 To view a spoiler, simply click or tap on the spoiler box shown in black colour.

ALSO READ: How to change your age or birthday on Discord

How to put a spoiler on images in Discord

It’s also possible to mark attachments such as an image or video as spoilers on Discord’s desktop client for Windows, macOS, and Linux.

To add spoilers to images on Discord, upload the attachment and tickmark the “Mark as spoiler” checkbox before hitting the Upload button. Meanwhile, you can mark a link as spoiler irrespective of the platform.

Unfortunately, it is not possible to send spoiler images on Discord via mobile as that feature is currently available only on the desktop client.

Twitter for iOS gets OLED-friendly ‘Lights out’ Dark mode

Twitter for iOS gets OLED-friendly 'Lights out' Dark mode