by Cosmic Paladin
in Android, Hands-On

HTC has finally launched its 2016 Flagship, HTC 10 in India for 52,990 INR. It was indeed a much-anticipated phone for many loyal HTC fans as well as a specific segment of folks who like a phone coming with around a 5″ screen and good software. We were at the launch event and also got a chance to play around with the device for a bit. We are happy to bring you the hands-on pictures of the phone and our initial impressions based on our first look and feel. For the sake of varied interests, we shall split the impressions across some key aspects that interest most of us! Here we go:

About the build, design, and “feel” in the hand – 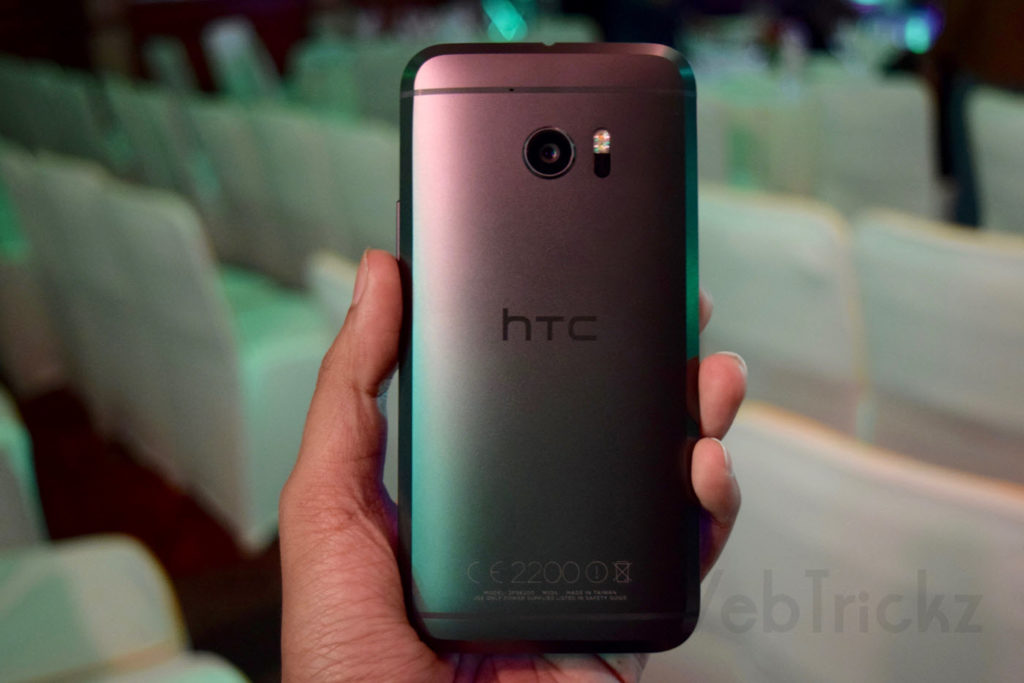 When you first look at the 10, it will instantly remind you of that “refreshing” feel you got when you looked at the M7 – something different, something so good, and something with the right amount of shine on it, all coming in right proportions to make it a good looking phone worthy of the place its been given, a “flagship“. The unibody design with so much metal on it and that extra proportion of chamfering on the back ensure the 10 has looks that are not that very stunning but at the same time brings in the uniqueness that is subtly appealing, especially for the ones who have an eye for details. As you run your hands on the phone the 2.5D glass becomes evident and so does the fingerprint scanner at the bottom. A position that is preferred by many against the one at the back in many other popular phones like the Nexus 6P. We found the fingerprint scanner to be really fast, somewhere on the lines of other flagships. The duo of back and app chooser buttons on either side of the FPS is backlight and works just fine.

The buttons on the side provide good tactile feedback and overall the phone feels good in the hand. The camera bump on the back however is pokey to start with but like the way we’ve seen in other phones, you will ignore it once you start using it.

The Display and Touch responsiveness – 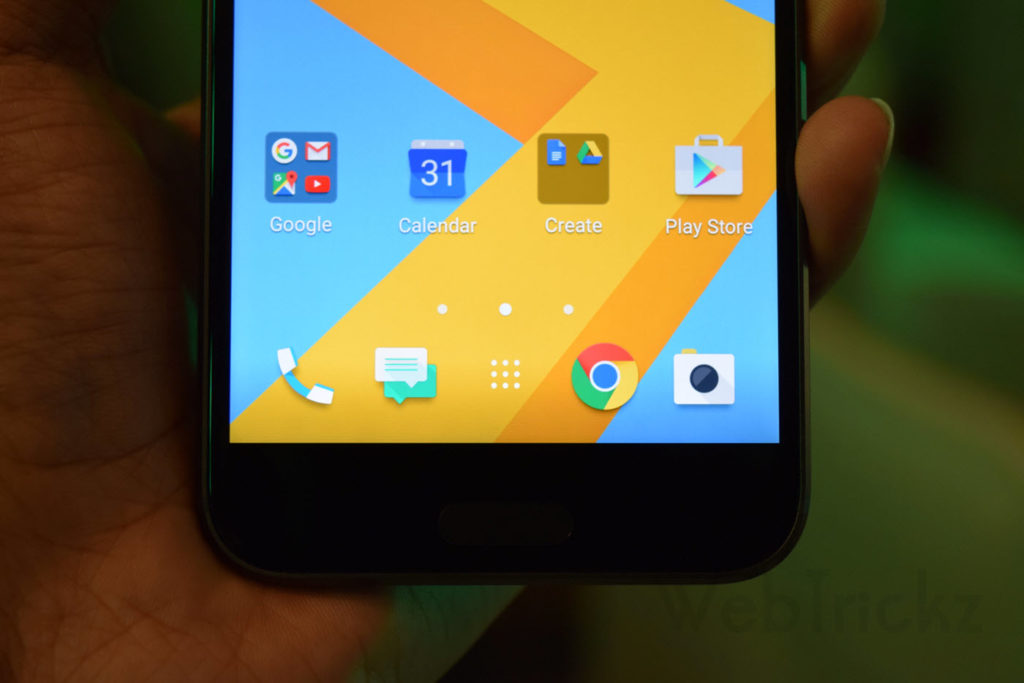 HTC has bumped the display into a 2K screen packing as many as 564 pixels per inch. We are told it covers around 95 % NTSC color gamut. We have seen the Vibe X3 from Lenovo that took it to somewhere closer to 100% NTSC color gamut and the kinda enriching experience it provided. The same holds good here as well. Thanks to the UI that has tons of black color in it, it’s easy on the eyes. And the icons have that subtle 3D effect as if they were on a layer on top of the display and we loved it, couldn’t get over it! The display as we informed earlier is a 5.2″ screen coming with Gorilla Glass 4 protection. Having said all of this, we couldn’t stop comparing the display with the Samsung S7 Edge we had with us and the S7 really is the winner around the display: period. But the 10’s screen looks much better than the one on M9.

Powered by Qualcomm’s Snapdragon 820 and 4GB of RAM, and a highly optimized Sense UI (we are informed) that is built off Android 6.0.1 Marshmallow was very zippy in the time we spent with the phone. The effort that HTC has taken to bring in as much as “material” design into a majority of the UI elements is quite evident. Useful gestures like picking up a call reduce the ringtone volume, flipping the phone to mute the ringing volume, the phone using its intelligence to scream louder for calls when in a bag are all so useful. The two-finger and three-finger wipe to bring down quick settings and stream media also make their way here. Opening browsers, launching the camera app, the gallery, and so on worked just fine and were snappier. And yes, there was no heating observed in the 30 mins or so we spent with the phone! Something that had made the M9 so infamous with the notorious Snapdragon 810 processor. 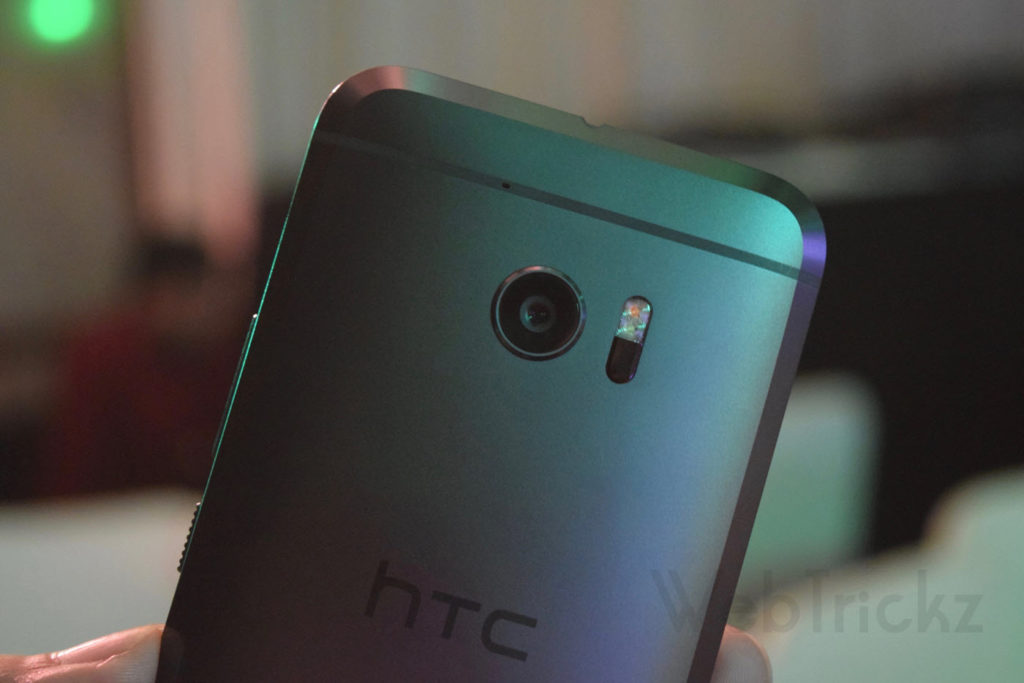 The last couple of HTC’s flagships were a disappointment when it came to the camera and has now forced HTC to move off the Ultrapixel approach. The rear shooter comes with a 12MP sensor but can do 1.5 um pixel size coming with an f 1.8 lens. What more, it also has OIS support along with second-generation dual-LED flash and PDAF. HTC told us that the camera clicks pictures super fast and it turned out to be true. Focusing speed is good and the overall processing is also very fast. While the overall image quality in indoor and well-lit conditions was decent we would’ve liked to spend more time to tell you what the performance is really like. But our initial thoughts are that it is better than M9 but certainly won’t threaten the Galaxy S7 / Edge (yes we had one with us) which is one of the best ones out there. We did some 4K video recording on the phone and we are super impressed with the audio quality captured, something that even the best phones struggle with when it comes to the volume especially in noisy conditions with distortion seeping in.

On the front is the 5 MP shooter which HTC calls the Ultraselfie. This also has the OIS and comes with a 1.34 um pixel size. Honestly, we are not in a position to comment on the performance in detail but it looked just fine.

Where is the Boom! –

Although that front-firing Boom speakers are gone, and there is one grille at the bottom, HTC makes up for it with a HiFi edition of BoomSound. It comes with a 24 Bit DAC that is supposed to deliver some stunning effects. Though the speakers are at the bottom it did pack a punch in our opinion. One also gets a very good pair of earphones and we will be testing this out later.

So what do we feel? Well, we are certainly impressed by the changes that HTC has made in making the corrections from the M9 era. But are these good enough to beat the big guns out there? The S7s? the LG G5s? Well, it’s a tough challenge. While the 10 may be a good phone, it lacks bringing in something mind-blowing to the table – like the edge screens or modular approach or anything of that sort. Considering the pricing too it will be a tough race but thankfully there are some things to be happy about like Quick Charge 3.0, the ability to add 2TB worth extra memory and that iconic flap cover which we feel are good offerings. We will wait to do a detailed review and bring our findings, hang in there! Tell us what you feel about the designs, specs, and pricing.