HTC One X9 Review – A good phone but steeply priced

HTC, after maintaining silence over its operations for a while, made a strong comeback in India with the launch of its 2016 flagship ‘HTC 10‘. In addition to the 10, the Taiwanese company also launched a bunch of other smartphones in India – the HTC One X9, Desire 628 Dual SIM, Desire 630, Desire 825 Dual SIM, and Desire 830. The One X9 is perhaps an improved version of A9 but you won’t be able to spot any relation between them as the design has significantly changed with the X9. HTC’s decision to give the X9 design a facelift makes sense as A9 was badly criticized all over for its blatant iPhone 6 like design. The One X9 was initially announced in Dec last year with a new global version of X9 being showcased at MWC 2016 and finally, HTC decided to launch the device in India. The HTC One X9 will go on sale in India from June 20th at a price of Rs. 25,990. Besides other HTC devices, we got to try out the One X9 at the launch and we’ve been using it as our primary phone as well for a while now. So, without further ado let us take you through our detailed review of the HTC One X9: 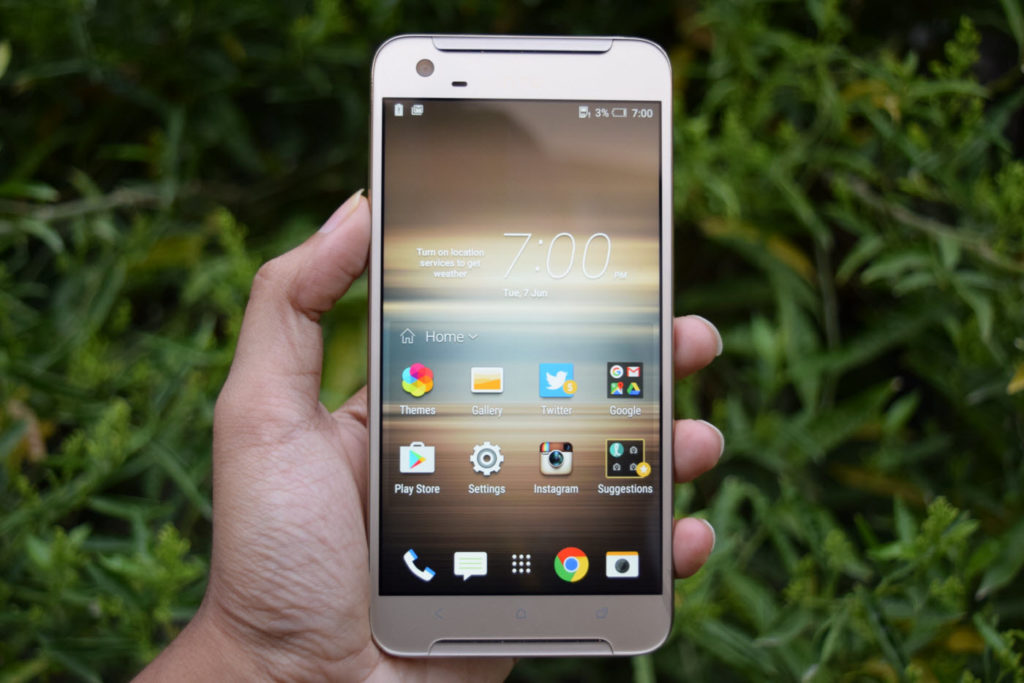 Speaking of the design, the X9 takes a cue from the company’s “metalmorphic” design philosophy. The X9 sports a softly brushed metal back featuring a silky finish that feels really smooth in hands and is certainly different than most metal phones out there. The phone has rounded corners with slightly curved edges at the back for a better grip but overall the device feels quite big to hold. The curved glass on the front integrates the dual front-facing BoomSound stereo speakers at the top and bottom edges with a different design than what’s usually found on HTC’s M series. A notification LED is on the top and 3 backlit capacitive keys are beneath the display this time around. The right side hosts a nicely textured power key, volume rocker, and a flap for a primary nano-SIM card tray similar to one on Sony’s Xperia. There is a bigger flap on the left side with slots for secondary nano-SIM and microSD cards. Thankfully, there is no Hybrid SIM slot as found in most Android phones these days letting users always access Dual-SIM.

Moving to the back, the camera and dual-tone LED flash sits inside a plastic strip with a dotted design that also hides the top antenna band but it looks unpleasing, thus affecting the true elegance of the X9. The bold HTC logo flaunts right in the middle. X9 being 8mm thick and coming with 170 grams of weight feels pretty heavy in hands especially when using the phone for long intervals. Overall, we’re fairly impressed with the X9’s design but the build looks solid. Comes in 2 colors – Topaz Gold and Carbon Gray 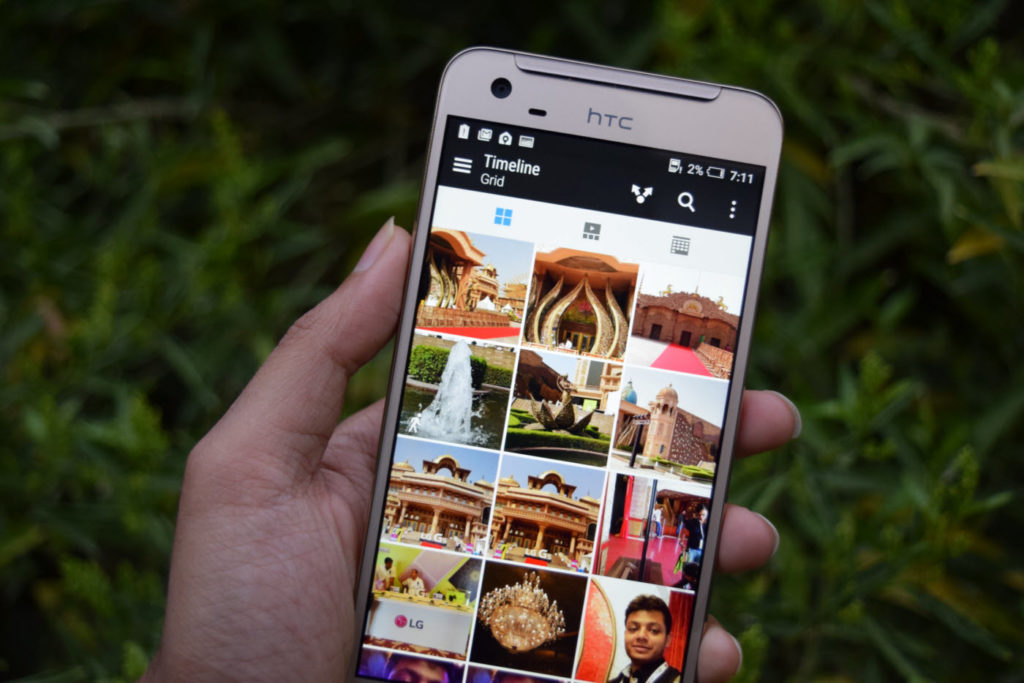 The One X9 comes with a 5.5-inch Full HD Super LCD display with curved-edge Gorilla Glass as compared to A9, which came with a 5″ FHD Amoled display. The display is bright, vibrant with real colors and good viewing angles. The color saturation levels look perfect and the display is easy on the eyes but it can be too reflective at times. There is also an option to set the desired color temperature ranging from utmost warmer to colder. The display is overall great but we wish HTC equipped it with an AMOLED panel.

The One X9 is powered by a MediaTek Helio X10 Octa-core processor clocked @2.16GHz coupled with PowerVR G6200 GPU. The handset runs on Sense UI based on Android 6.0 Marshmallow. Under the hood, it packs 3GB of RAM and 32GB of onboard storage that is further expandable via microSD card up to 2TB. Out of 32GB storage, around 23.1GB of free space is available for the user, and out of 3GB memory, 1.8GB of memory was used on average in our test. It supports NFC, Dual 4G LTE SIM, dual-band Wi-Fi, and USB OTG as well. Unfortunately, unlike A9 there is no fingerprint sensor on the X9 which is disappointing.

In terms of performance, the device tends to perform well and was pretty snappy while performing routine tasks such as using social media apps, browsing, multimedia, gaming, multitasking, etc. The software looks well optimized and works smoothly as there were no frequent lags or app crashes during our test. The device scores up well in terms of gaming performance as we didn’t encounter any major lags or stutters while playing high-end games like Asphalt 8 or Dead Trigger 2. However, the X9 tends to get warm and sometimes gets hot with 20mins of video playback and gaming. In our opinion, HTC should have opted for a better processor (preferably Snapdragon 650) as Helio X10 is a mid-ranger while X9 comes at a premium pricing. The device clocked a score of 46771 in AnTuTu Benchmark. In short, the overall performance of the X9 is satisfactory.

Back to its signature feature, HTC has equipped the X9 with dual front-facing BoomSound stereo speakers with built-in amplifiers that were absent in the A9. The One X9 delivers a crisp and loud sound that’s high in quality and rich in bass letting you enjoy a superior audio experience without missing out on all those minute details. We loved the audio effects on the X9 during gameplay. There are 2 modes in settings that you can switch between – Music mode and Theater mode. We personally found the Theater mode to be better and it was louder enough than the Music mode. If you used to like HTC’s stock Music app then you’d be unhappy to hear that it has now been replaced with the Google Play Music app. 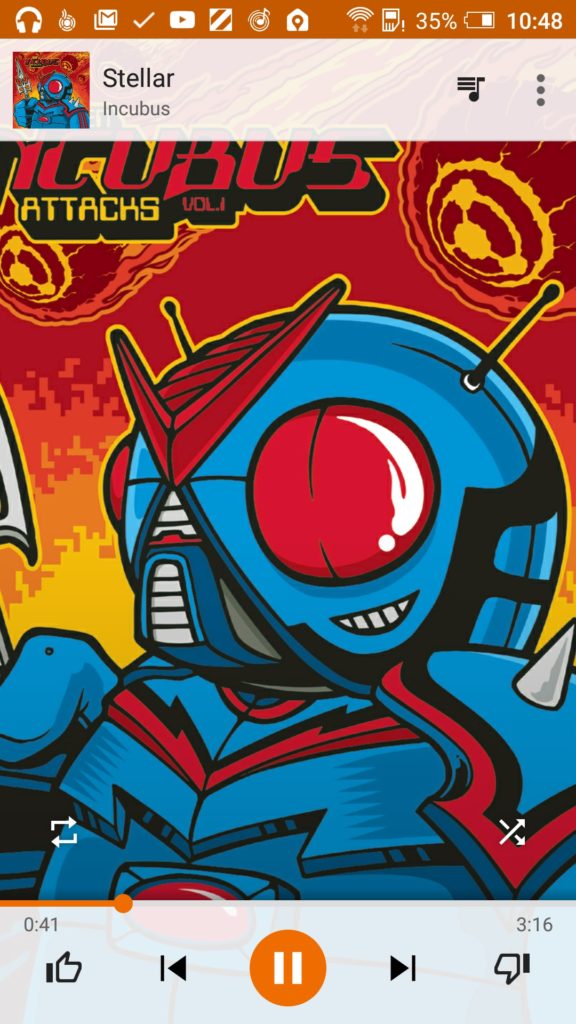 The X9 runs on HTC’s Sense UI 7.0 based on Android 6.0 Marshmallow. HTC is aiming at simplifying the user experience by removing duplicate apps and bloatware from its software. You will notice a unified look and feel with material design across Sense UI giving you a taste of stock Android. The UI includes the company’s proprietary Sense apps like BlinkFeed, Sense Home, Themes, Zoe video editor, and Photo editor. Sense Home is a behavior-detecting home screen widget that automatically displays apps based on your location in 3 profiles – Travel, Home, and Work.

Sense UI also offers a lot of personalization options in the Settings menu. Users can switch between various themes, accent colors to change the color theme and feel. Motion launch gestures include options such as double tap to wake, swipe up to unlock, volume button to launch the camera, etc. There are other handy features such as Flip to mute, Quiet ring on pickup, and Pocket mode. HTC’s Zoe app lets you easily create highlight videos or clips of up to 3mins with your desired music, theme and save them locally. Overall, we found the UI to intuitive and smooth without any shortcomings. 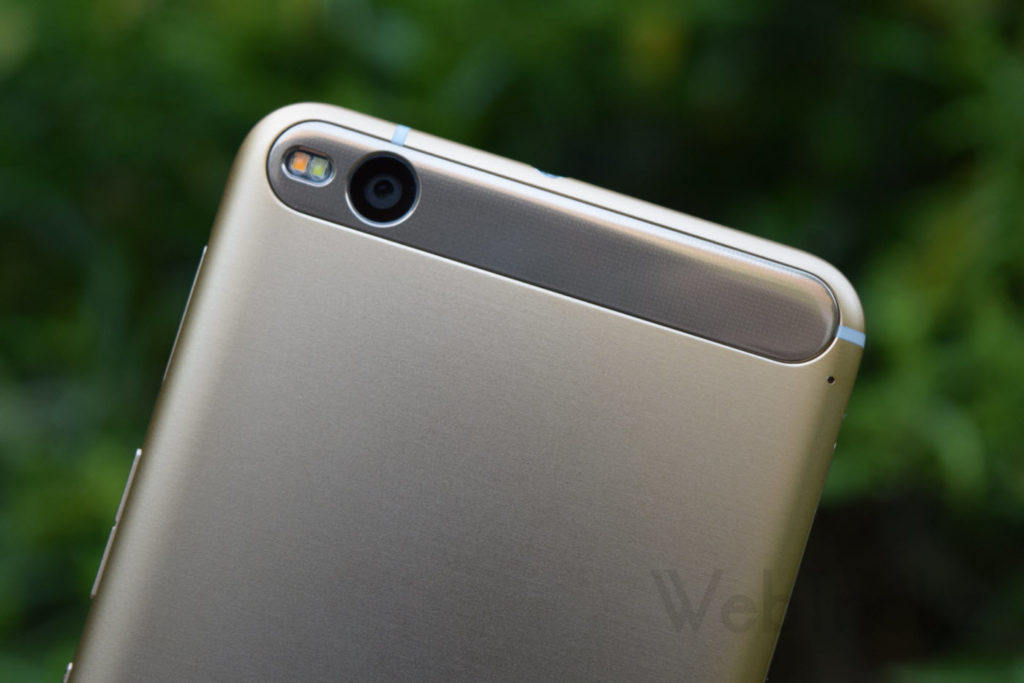 Talking about the camera, the One X9 has a 13MP primary camera with dual-LED (dual tone) flash, autofocus, OIS, f/2.0 aperture, and 27.9mm focal length. There is a Pro aka manual mode that also lets you save the photo in RAW format. It comes with interesting camera modes such as Hyperlapse, slow-motion video recording in 720p at 120fps, and 4K video recording support at 30fps. You can also take a 3 sec Zoe video @6fps directly from the camera interface. Regarding the performance, the camera does a good job in daylight conditions as photos taken were sharp with a decent amount of details and good color reproduction. Whereas shots captured in indoor areas had slight noise, while those taken in low-light and night environments took a bit longer to focus but came out quite good. However, the OIS doesn’t look so effective in low-light conditions.

On the front, there is a 5MP camera with fixed focus, f/2.8 aperture, and support for 1080p video recording @30fps. The selfies taken in daylight were of good quality but those taken in indoors were pretty grainy in nature. The fixed focus seems to be the culprit here as we needed very steady hands to take a clear selfie without any blur. Overall, we found the camera performance to be good but not remarkable.

The phone is powered by a 3000mAh battery with fast charging support. What certainly is one of the most important aspects of any smartphone is sadly the weakest point of the One X9. The 3000mAh might look good on paper but the phone delivers a below-average battery life even under moderate usage. In our 1st test, the battery lasted for 16hrs 18m with a screen-on time of 4h 39m on a single charge. In the 2nd test, the battery lasted for 9hrs 33m with a SOT of 5h 48m. The battery also got drained by 4-5% overnight while the phone was in standby mode. During our test, we performed usual tasks such as accessing apps, browsing, gaming and listening to music without any prolonged usage.

The phone comes with a ‘Power Saver’ and ‘Extreme power saving’ mode to extend the battery life. The Power saver mode seems to improve the battery life but not vastly as you might expect. Overall, we are pretty disappointed with X9’s battery performance.

Note: These battery life results could vary from person to person depending upon their usage pattern.

HTC One X9 at a price tag of Rs. 25,990 is certainly an overpriced phone when compared with the rest of the competition. In the same price segment, we have the likes of Redmi Note 3, Moto G4 Plus, Le 2, Mi 5, Le Max 2, Galaxy A5 2016, Vibe X3, and more that come with a fingerprint sensor and are powered by equally or more powerful Snapdragon processors. It would have been a better deal had HTC priced the X9 under 20k but 26k looks steep pricing. Though we can’t judge a device simply on basis of specs as brand value and user experience is what matters too. The One X9’s highlight is its premium design, BoomSound speakers, and streamlined software but it misses on some key elements like a fingerprint sensor and a good battery life. However, the phone is a considerable choice for users who don’t vouch on specs and are willing to get a device that can offer value over a long period of time and can work efficiently in everyday tasks. HTC One X9 indeed does that, offering good performance and user experience which eventually a normal user strives for!