In early September, Motorola launched the New Moto G (2nd Generation) in India which is a successor to Moto G 1st gen. In comparison to the older version of Moto G, the new MOTO G 2014 features a bigger screen, an improved camera, front-facing stereo speakers, and support for expandable storage. What’s common between the duos is that both house the same hardware, i.e. the same CPU and GPU with 1GB of RAM. The battery capacity hasn’t been increased as well which is quite disappointing. The new Moto G has been launched at a pricing of Rs. 12,999 for 16GB variant, hence cheaper than the first-gen. 16GB Moto G. Let’s see what all the new Moto G has to offer in our detailed review below! 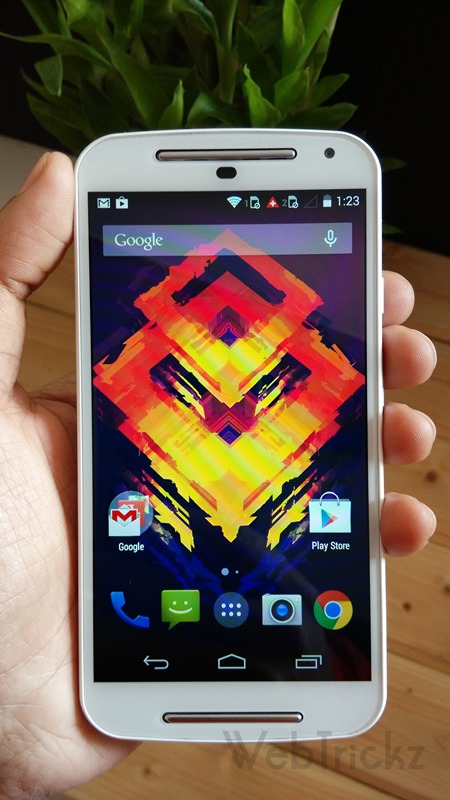 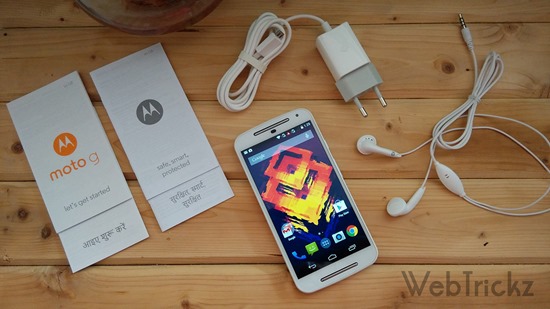 The box contains the handset, a micro USB wall charger, standard Motorola earphones with handsfree support, and a couple of manuals in English & Hindi language.

The 2nd gen Moto G has a form-factor similar to the original Moto G, but it packs a significantly larger display with slightly extra weight. We got to test the White color variant of the phone that is entirely white and a beauty to hold! The handset despite being a mid-range smartphone boasts an impressive build quality and ergonomic design. The removable back cover is made of polycarbonate with a matte finish that offers a very good grip. The sides have a semi-gloss finish, and the front comprises Corning Gorilla Glass 3 protection. Despite having a large 5” display, being thicker at 11mm, and weighing 149 grams, the phone feels really comfortable to hold and use. Thanks to its curved back that makes it appear slimmer and rounded corners that provide great handling even with one-handed usage. The phone is reportedly water-resistant without any IP certification. The interchangeable back shells (sold separately) allow users to change the appearance of their Moto G with some stylish color combinations. 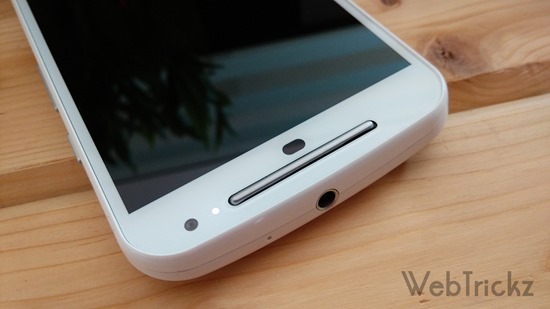 The front of Moto G 2014 packs two outshining silver metallic color bars that house dual stereo speakers, an earpiece, and the primary microphone. The front top is equipped with proximity and ambient light sensors, a front camera, and white color LED notification light. The plastic power button and volume rocker on the side offers low tactile feedback. The secondary noise-canceling microphone and 3.5mm jack are located at the top while the micro USB port is placed at the bottom. The removable back panel reveals two slots for micro SIM card and one slot for micro SD card. Unfortunately, our unit had a bit loose back cover just like the case with Moto E and we noticed a slight gap between edges and screen glass that accumulates dust. Comes in 2 colors – Black and White with an option for interchangeable colourful backshells. 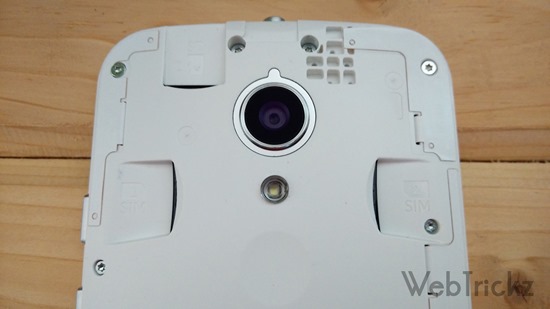 Overall, the phone has a great build quality, looks premium, and feels good in the hand.

The next-generation Moto G (2014) packs a 5-inch IPS HD display with a resolution of 1280 x 720 pixels. The display despite being bigger than its predecessor retains the same resolution, resulting in slightly lower pixel density at 294ppi as compared to 326ppi of 1st gen Moto G. The display is protected with Corning Gorilla Glass 3 and is splash resistant. The display is impressive with bright picture quality and wide viewing angles. Apparently, the newer version delivers a sort of reduced sharpness due to lesser PPI but that’s perfectly fine unless you get your eyes close to the text. The display has good color reproduction and on-screen navigation buttons. Considering its budget pricing, the display quality of Moto G 2 is excellent.

The new Moto G packs the same 2070mAh non-removable battery as its predecessor. The same capacity may sound disappointing to some users considering the bigger size display but the overall battery performance is pretty good. Initially, we noticed the battery to be draining faster but after charging it to 100% in one go, there was a noticeable improvement in the battery backup of the phone. In our test, the battery lasted for 20h 30m at 6% with a screen-on time of 5h 47m under standard usage. The stock Android includes a ‘Battery Saver’ option that helps you conserve phone power when it is on a low battery. For those concerned, there is no LED indicator for charging but that isn’t a big deal. It comes with a 550mA non-detachable wall charger that takes pretty long to charge the phone. Tip – You can rather use a quality charger with an output of 1A/2.0A to charge it way faster. 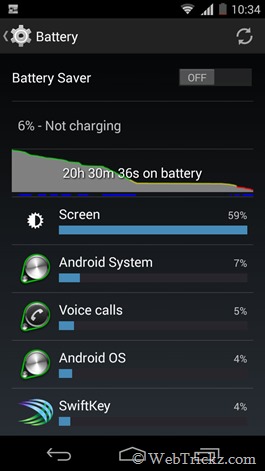 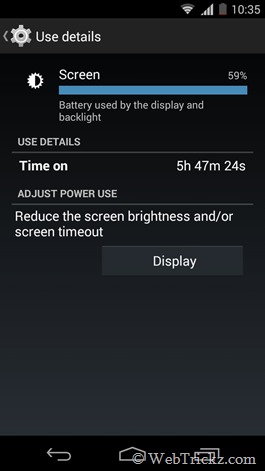 Unlike the first generation Moto G, Moto G 2 comes with support for expandable storage up to 32GB via microSD card. In India, the phone is only available in a 16GB variant that offers 12GB of user available internal storage. With an SD card inserted, you can save camera photos directly to the memory card by enabling that option in the camera settings. The handset comes with USB OTG support, so you can connect a micro USB pen drive and watch media content on the go. As there is no file manager app included, download one from Google Play and use it to explore your USB storage files. Users concerned about low internal storage don’t need to worry as they can simply Move apps to SD card from Apps settings. 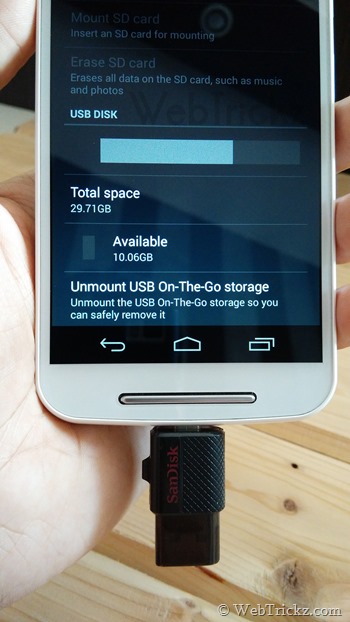 The Moto G 2 features dual stereo speakers in the front rather than the back, the concept being quite similar to that on HTC smartphones. The speakers are placed at the mid-top and mid-bottom on the front, behind the stylish pair of silver bars. The speakers are pretty loud and clear but not amazing. One can easily notice distortion in sound quality at high volume but turning off the ‘Audio Effects’ option in sound settings fixes that up to an extent. We would say that the sound isn’t so crisp and also the voice call quality is sort of average. 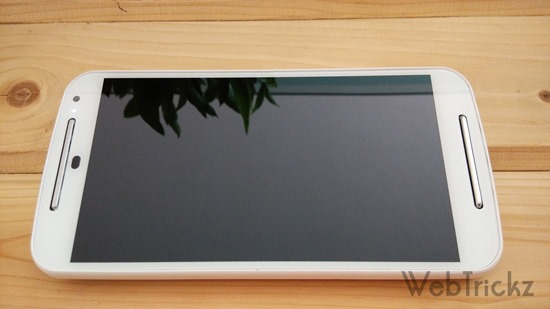 The new Moto G is a Dual-SIM handset and 3G worked on both the SIM’s, though we didn’t test 3G on both SIMs simultaneously. It accepts a micro SIM card for both slots that work in dual-standby mode and has FM Radio. Connectivity options include: Wi-Fi 802.11 b/g/n, Wi-Fi hotspot, Bluetooth 4.0 LE, HSPA+, micro USB 2.0, GPS with A-GPS and GLONASS. In Dual SIM settings, one can set connection priority, enable/ disable either of the SIM cards and switch between 3G & 2G networks. You even have the option to change the SIM name and SIM color. In case only one SIM is inserted, the icon for the 2nd SIM intelligently hides from the status bar. 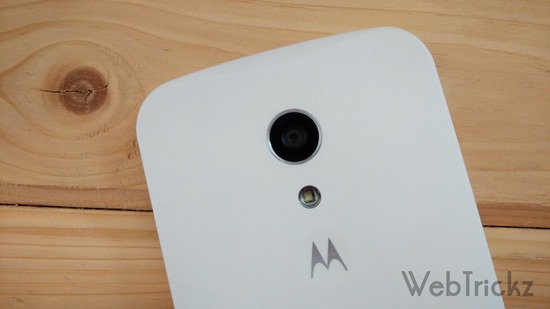 The phone features an 8MP rear camera with LED flash, an improvement over 1st gen Moto G. It comes with f/2.0 aperture, and camera features include Autofocus, Slow motion video, Burst mode, Auto HDR, Panorama, face detection, geo-tagging, tap to focus, support for 720p HD video recording @30fps, and still capture in 4:3 & 16:9 aspect mode. The UI of the camera app is pretty simple with minimal options and one can simply tap anywhere to capture. There is a 2MP front-facing camera for selfies with support for 720p video recording. 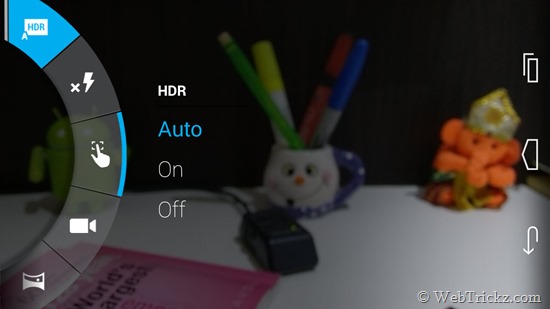 The 8MP shooter is capable of taking good photos with natural colors though they appear to be slightly noisy. The low-light shots without flash and night shots with flash look pretty decent. To get an idea of camera quality, just go through the various camera shots taken in different conditions. All the below samples are untouched (click to view them in full size).

The new Moto G is powered by a Cortex-A7 Qualcomm Snapdragon 400 1.2 GHz quad-core CPU and Adreno 305 GPU, clocked at 450 MHz. The successor packs the same MSM8226 chipset and the same amount of 1GB RAM as seen in 1st gen. Moto G. Both the devices have the same screen resolution as well, so you can expect similar performance. We tried running the Dead Trigger 2 game on the new Moto G, the gaming performance was smooth and the graphics were amazing. The phone runs on stock Android 4.4.4 KitKat without any bloatware, just comes pre-loaded with a few Motorola proprietary apps like Alert, Assist, and Migrate. Those obsessed with the latest software version will be glad to hear that Motorola has already started rolling out the latest Android 5.0 Lollipop update for Moto G (2nd Generation) in the US and more counties will follow soon. The biggest advantage of having this phone! 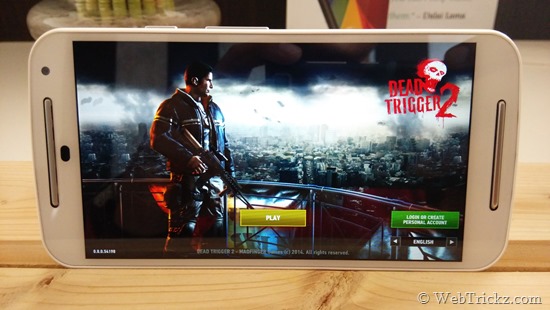 Initially, we were disappointed with the inclusion of only 1GB RAM in the new Moto G as that’s a norm for most entry-level Android phones nowadays. But the software has been optimized pretty well according to the hardware such that you won’t experience any lags whatsoever unless you repeatedly perform intensive tasks on the device. In Benchmark tests, the device knocked a score of 17990 in Antutu and 8946 in Quadrant benchmark.

Motorola Moto G 2014 is certainly one of the best Android phones in the sub-15k price segment in India. The phone comes with Motorola’s brand name, premium design, larger display, runs on the latest version of Android and an upgrade to Android 5.0 Lollipop is guaranteed. The new Moto G packs a high-quality display, stereo speakers, Dual-SIM, expandable storage, delivers great performance and features; overall all stuff that one would expect from a quality smartphone. Available at a price of Rs. 12,999 for 16GB variant, Moto G 2nd generation is a value for money phone! Those interested can buy it online from Flipkart.