Following a recent update, the Facebook Messenger app has added the option to pin messages. This new feature allows you to pin individual messages within a chat conversation on Messenger. What’s great is that you can pin a message in group chat as well as individual chats. There is no option to pin chat messages in a Secret Conversation though.

What is Pinned in Messenger?

The pin feature comes in handy as one can pin important messages such as an address, picture, or event invite and find them quickly all in one place. It is also useful to pin or bookmark specific messages during a group conversation so you don’t miss them. Similar to the reply feature, you can pin yours as well as the senders’ message(s) in a chat conversation.

That said, pinning a message in a chat won’t make it appear at the top of the chat window. The pinned messages instead stay at their original position in a chat and you can easily recognize them.

Now let’s see how to pin messages in Facebook Messenger on iPhone and Android.

That’s it. ‘You pinned a message’ text will then appear at the bottom of the chat.

In the same way, you can pin messages in the Messenger group chat.

How to see pinned messages on Messenger

You can quickly find all the messages pinned by you in one place, without having to manually look for them within a chat conversation.

To find a pinned message in Messenger,

Alternatively, you can scroll down to the end of the chat window and tap the ‘See all’ option next to ‘You pinned a message’. 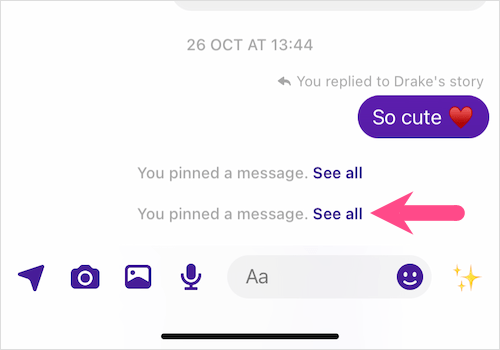 How to unpin a message in Messenger

TIP: In the Pinned messages section, tap and hold a pinned message and select ‘Unpin’ to quickly remove the pin.

Hope you found this article helpful.