Recently, Samsung launched its top-of-the-line smartphone “Galaxy Note 7” in India at a price tag of Rs. 59,900. Besides the Note7, the company also launched its new wearables that include the Gear Fit2, Gear IconX, and Gear VR. The Note7 will go on sale in India starting September 2nd and users can avail Reliance Jio Preview offer with unlimited access to Jio services for 90 days. At the event, we got our hands on the Note 7 and are here to share our initial impressions. The Note7 somewhat looks a mixed flavour of Note 5 and S7 edge in terms of design which makes sense as Samsung is now following a uniform design language for its flagship series of devices. 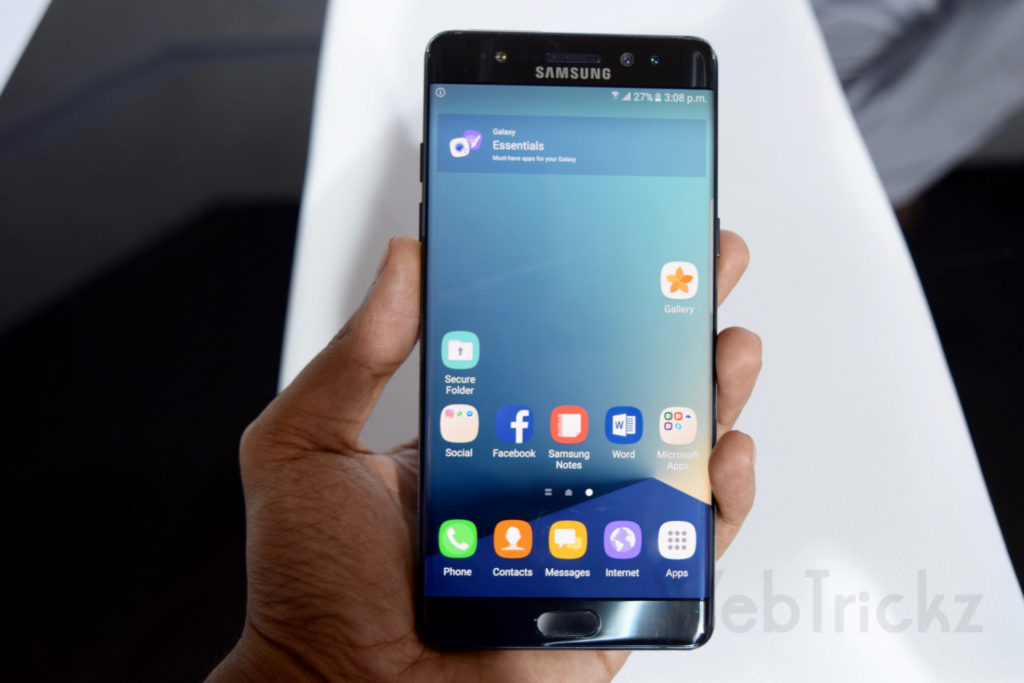 The first major change that you’ll notice in Note7 is the dual-edge curved display as seen earlier in the Galaxy S7 edge. Though we’ve seen a curved glass back earlier in Note 5 that now extends to the front with Note7, making it appear more elegant and seamless in nature. The symmetrical dual-edge curved design across the front and back of the phone looks beautiful and also offers a comfortable grip to hold. The metal sides on Note7 are thicker which helps in preventing accidental touches while holding the device. The metal power button is on the right whereas the volume buttons are on the left, both of which are sturdy and offer very good tactile feedback. The top side houses the Dual SIM Hybrid tray that accepts Nano-SIM + Nano-SIM or microSD card up to 256GB. On the bottom, there is a Type-C port, speaker grille, and the upgraded S Pen that pops out with a gentle push. On the front, is an Iris Scanner on the top which is a more secure biometric system alongside the fingerprint sensor, integrated with the physical home button. Just like Note 5, there is no IR blaster on Note7 as well which is a bit disappointing. 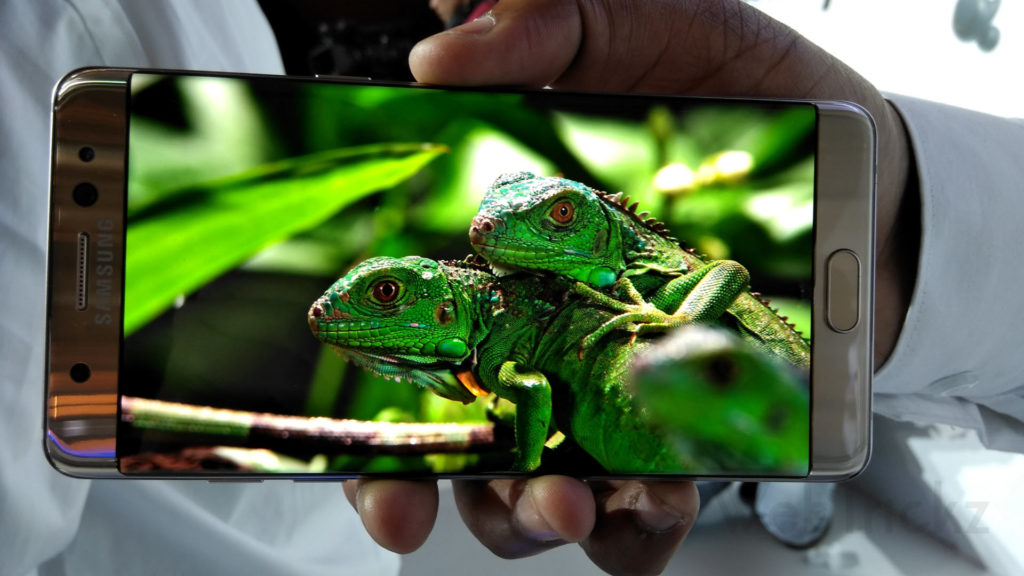 Note 7 sports a stunning 5.7-inch QHD Super AMOLED display with a resolution of 1440 x 2560 pixels at 518 PPI which is curved across both sides, first-ever on Note series. According to experts at DisplayMate, Galaxy Note 7 has the best smartphone display so far with a peak brightness of over 1,000 nits, which improves screen visibility in very high ambient light and helps the ‘Video Enhancer’ with HDR playback for all videos. It’s the first phone to have Dual Ambient light sensors at the front and back for improved automatic brightness. Boasting capabilities of 4K Ultra HD TVs, Note7 can display the latest high-end 4K video content. It comes with four user-selectable Screen Modes: Adaptive Display, AMOLED Cinema, AMOLED Photo, and the Basic Screen Mode which also helps in extending the battery life. 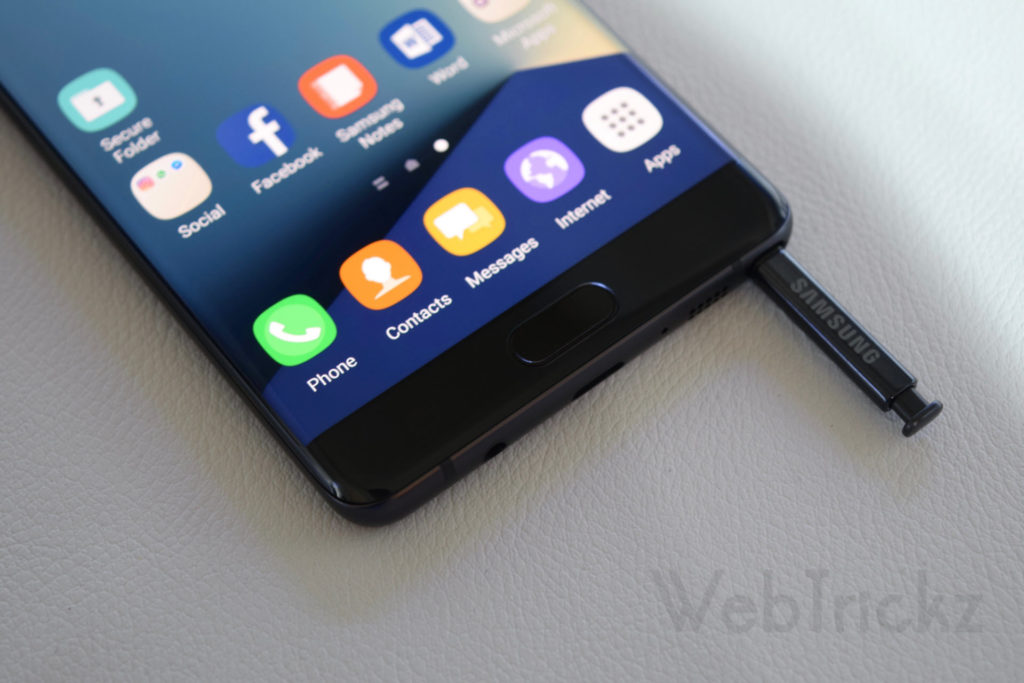 The Note7 is the first phone with Gorilla Glass 5 that protects the front and the back as well. It is an Always-on display allowing one to quickly take notes using the S Pen. The S Pen gets an upgrade with a smaller 0.7mm tip and improved pressure sensitivity that also works in rain, thanks to IP68. Besides the dual-edge display, Samsung has introduced another cool yet useful feature in Note 7, i.e. IP68 rating. It is the first phone in the Note series that’s water and dust-resistant such that it can survive in 1.5m depth of water for up to 30 minutes. The S pen and S Pen port are water-resistant as well.

Iris Scanner on a smartphone is something really unique that Samsung has introduced with the Note7. It is a more secure form of biometric identification technology than the fingerprint scanner, the latter being standard now in most phones. The feature works precisely as per some users but we were unable to test it on the demo units available at the launch. Samsung has also clubbed a Secure Folder as a part of a software feature that lets users keep their private and personal data secure in a separate folder, similar to a vault. 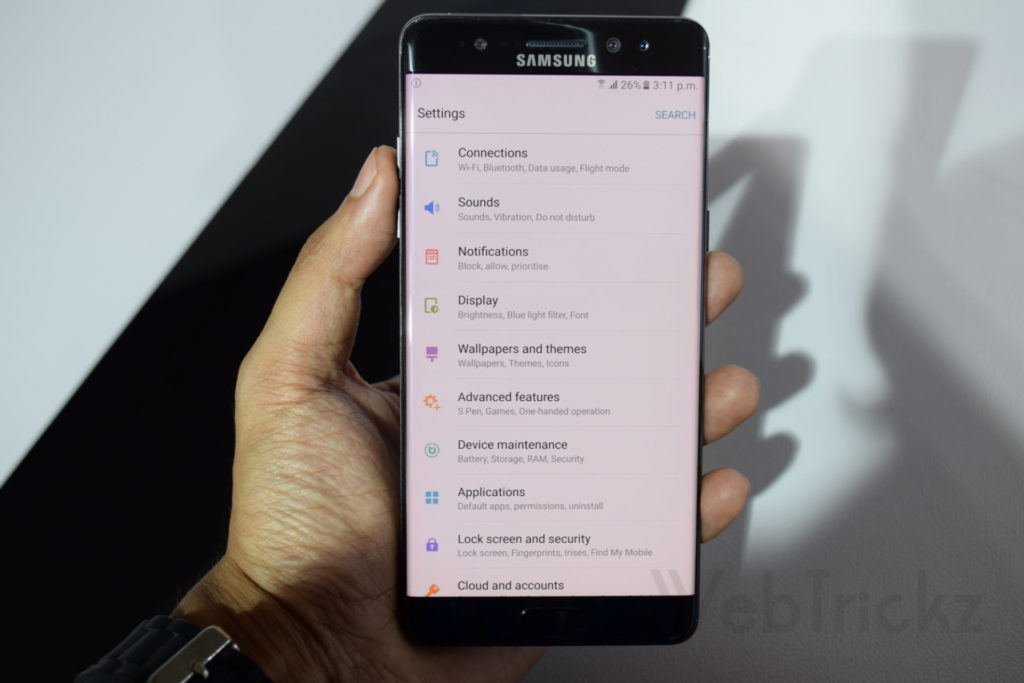 Under the hood, the Note 7 is powered by an Exynos 8890 Octa-core processor (2.3GHz Quad + 1.6GHz Quad) with 4GB of RAM and 64GB of internal storage. The option for storage expansion has been added back and one can add a microSD card of up to 256GB but that requires the secondary SIM slot. The phone runs on Android 6.0.1 Marshmallow and Samsung seems to have further improved its TouchWiz UI interface. It comes with a 3500mAh non-removable battery which is higher as compared to 3000mAh on Note 5. Note 7 comes with a USB Type-C reversible connector, offers support for fast charging and wireless charging too.

Coming to the camera, it’s the same one as seen on Galaxy S7 and S7 edge. Note 7 comes with a 12MP dual-pixel rear camera with f/1.7 aperture, phase detection autofocus, OIS, and LED flash. The camera UI looks nice and has options to record videos in 4K, Full HD, slow-motion, etc. On the front is a 5MP shooter with f/1.7 aperture and Auto HDR. A heart rate sensor is there that sits next to the rear camera. 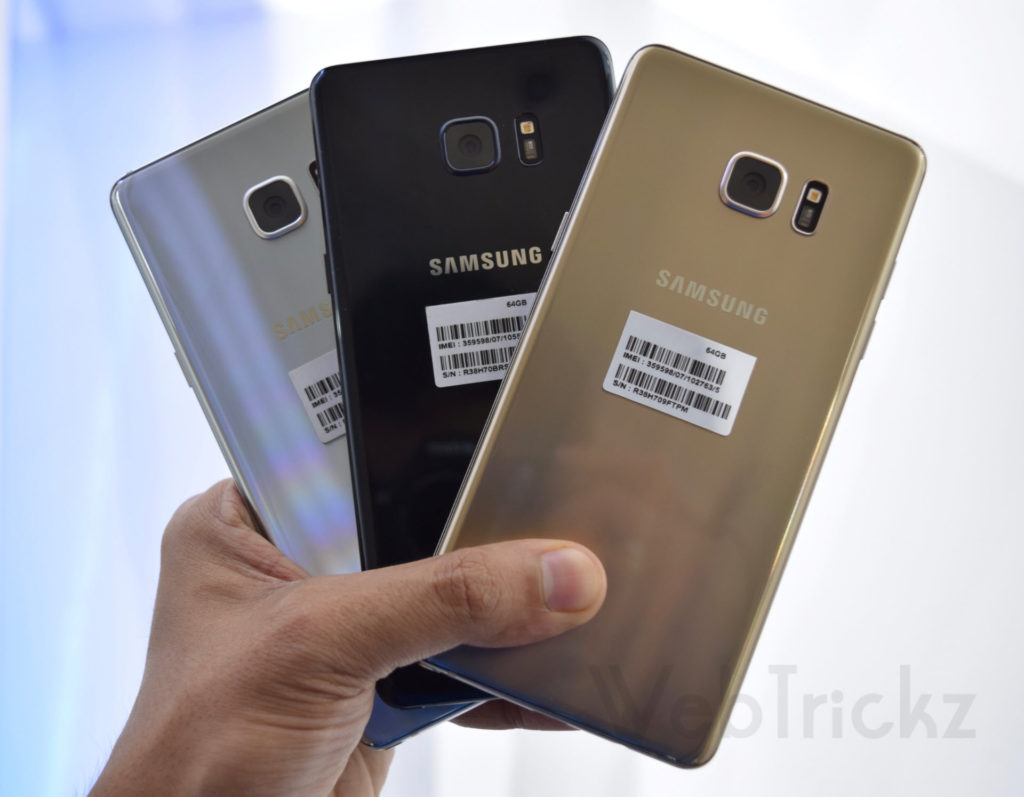 As per our brief hands-on with the device, the Galaxy Note 7 looks like a great package both in terms of design and hardware it packs. As we’ve tried the S7 edge earlier, we’re confident it’s a much better deal for those looking for a bigger display, a professional smartphone with S Pen, advanced security with Iris scanner, best phone display to date, and a gorgeous design with a fusion of glass and metal. We will try to review the Note 7 and come up with a detailed review. For those interested, the device will be available for pre-order in India from August 22nd and those who pre-book and buy can get hold of the new Gear VR at a special price of Rs. 1990.