Guide to Configure Gboard Settings on iPhone and Android

Learn how to access Google Keyboard settings on your iOS or Android device.

by Mayur Agarwal
in FAQ, How To's

Gboard or Google Keyboard is a very popular virtual keyboard, available for both Android and iOS. Being a Google app, it is usually the default keyboard on most Android devices. Like several other virtual keyboard apps, Gboard comes with an autocorrect feature.

Autocorrect automatically corrects the words while typing and gets rid of punctuation errors. Auto-correction is on by default and is a blessing as long as it works as intended. You cant, however, blindly rely on an AI-powered feature that can misinterpret your input and mess up the text conversation.

Perhaps, if you find auto-correction annoying or something you aren’t comfortable with then you can disable it. Then you won’t have to worry about the embarrassing autocorrect fails on social media, messaging or business emails. Let see how you can disable autocorrect in Gboard on Android, iPhone and iPad. Besides, there are some other settings in Gboard that you can toggle off if you want.

How to find Gboard keyboard settings

If you’re using Gboard or any other third-party apps like SwiftKey then changing the keyboard settings can be a bit tricky. That’s because the settings for third-party keyboard apps on iOS isn’t accessible from the iOS Settings interface. 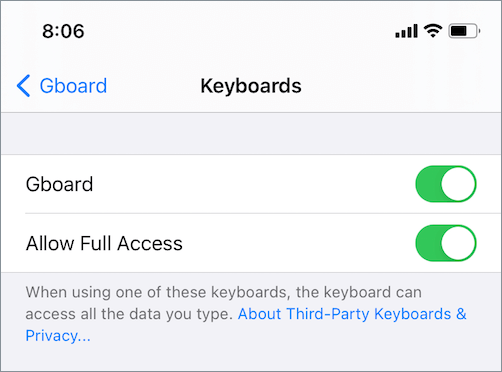 To get into Gboard settings, follow the steps below.

On iPhone and iPad

That’s it. Google Keyboard now won’t automatically correct the typos for you. Hence, make sure to proofread the spellings and text you type before posting.

Go to Gboard settings on Android. Tap Text correction and turn off the toggle for “Auto-correction“. Now Gboard won’t correct words while typing.

Turn off predictive text on Gboard

Unfortunately, there is no setting to turn off predictive text in Gboard on iPhone. So you will continue to see word suggestions that Google Keyboard suggests while typing.

However, you can turn off Emoji suggestions in Gboard on iOS.

Predictive text is word suggestions that appear in a separate bar at the top of the onscreen keyboard as you type the text. This feature can help you fix mistakes and allow you to type a lot faster than usual. However, if you are getting vague predictions or Gboard can’t adapt to your writing style then it’s better to disable predictive text.

To do so, open Gboard settings > Text correction. Turn off the toggle for “Show suggestion strip“. The word suggestions bar now won’t appear while typing. 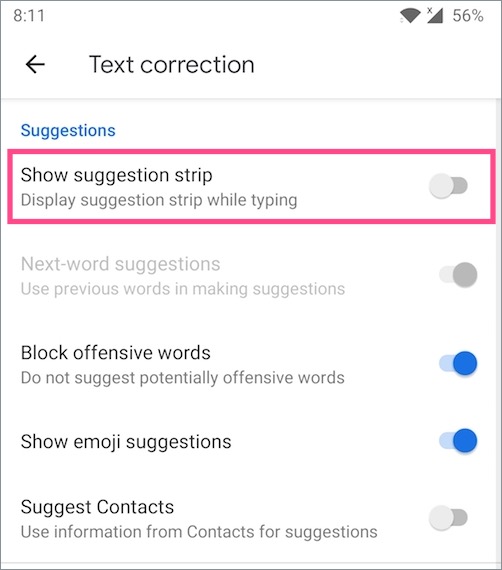 Turn off keyboard clicks on Gboard

I personally don’t like clicks or sound made by the keyboard on tapping the virtual keys. That’s because the keyboard clicks cause distraction and are a bit annoying too. Thankfully, you can easily disable the keyboard sounds in Gboard on Android. On iPhone, however, Gboard doesn’t produce any sound.

To do so, head over to Gboard settings and open Preferences. Scroll down and turn off the toggle button next to “Sound on keypress“. 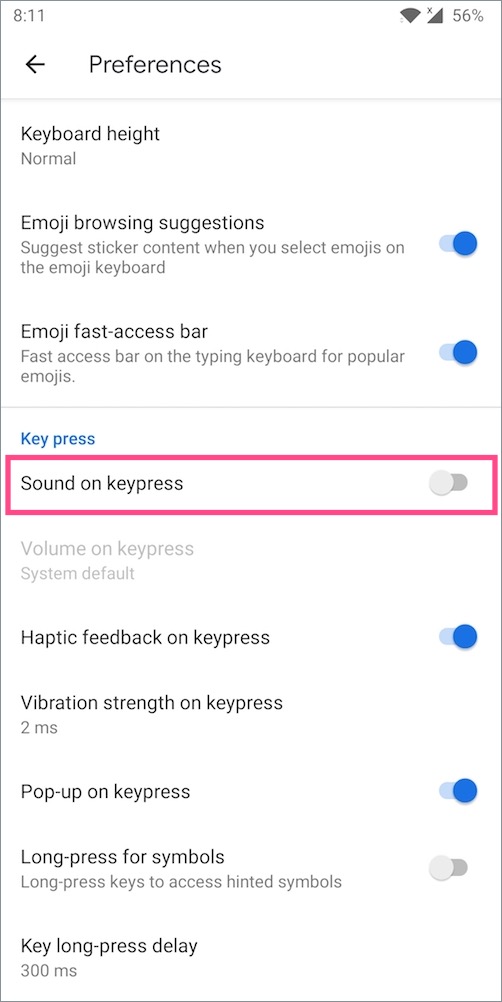 Turn off vibration in Gboard

Haptic feedback can be annoying or useful depending on your preference and typing style. When haptic feedback enabled, you feel a soft vibration on each key press. This gives a feeling of typing on a physical keyboard. Haptic feedback is something that isn’t a part of the stock iOS keyboard though. Well, if you don’t like haptics for key presses then you can simply turn it off for Gboard.

NOTE: If the System Haptics setting (located in Settings > Sounds & Haptics) is turned off on your iOS device, then Gboard’s vibration will be disabled automatically.

Go to Gboard settings > Keyboard settings. Then disable the setting for “Enable haptic feedback on key press“. Now you won’t feel any vibration or tactile feedback while typing in Google keyboard.

Open Gboard settings > Preferences. Scroll down and disable the toggle button next to “Haptic feedback on keypress“. 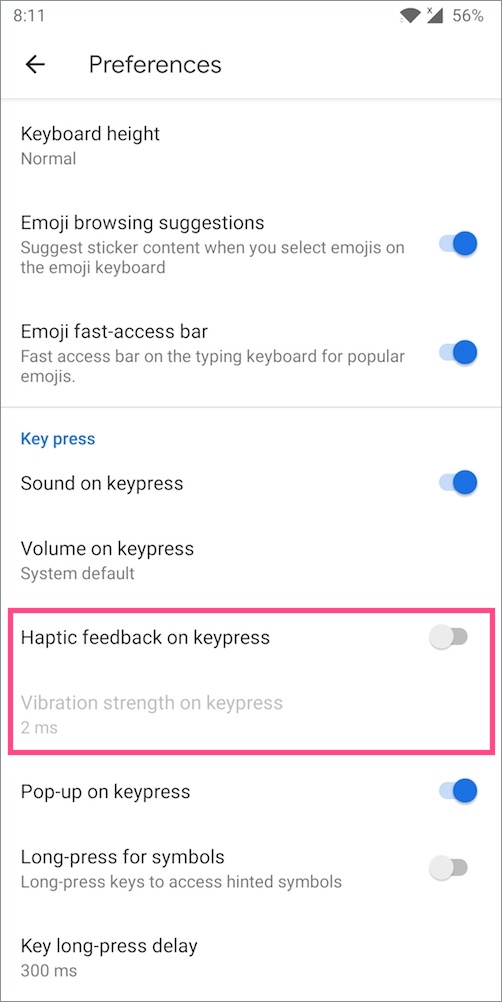 In case you don’t want to completely disable the vibration, tap “Vibration strength on keypress” and set the desired intensity.

Disable the floating keyboard in Gboard

Gboard for Android comes with a floating keyboard feature that allows users to move the keyboard around the screen. One can place the keyboard anywhere and even resize it for easy one-handed usage.

To get rid of the floating keyboard on Gboard,

Alternatively, you can drag the keyboard to the bottom of the screen to dock it to its original position.

If you’re concerned about privacy and don’t use the voice input method then it’s advisable to turn off Google voice typing. To turn off speech-to-text in Gboard, follow the steps below. 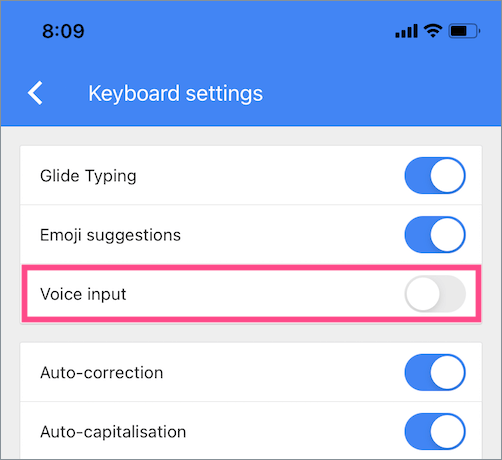 Alternatively, go to iOS Settings > Gboard and turn off access to the Microphone.

Go to Gboard settings > Voice typing. Turn off the toggle for “Use voice typing“. This will disable the recording and will turn off the voice to text feature. 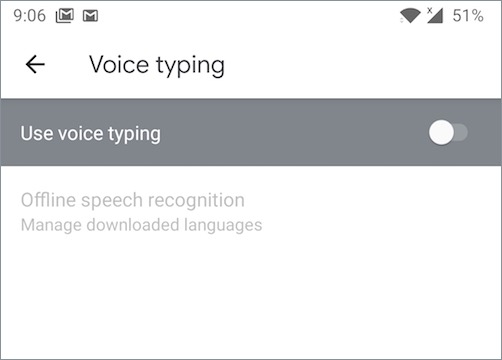 Automatic capitalization is enabled by default in Gboard which automatically capitalizes the first word of each sentence. There is a quick way to turn off this feature.

Do let us know which other settings you like to configure in Gboard.

How to Add Bitmoji to Google Slides on Desktop and iPhone