As you may know, the smartphone industry has turned highly competitive now with hundreds of Android phones launching every day. These phones especially from Chinese vendors are available at very affordable prices with lots of options to choose from but battery backup remains one of the major concerns. Thankfully, the Taiwanese giant ‘ASUS‘ has recently launched an improved version of its “Zenfone Max” that aims to circumvent the crucial needs of Indian consumers who want a phone with great battery life besides other standard features but are struggling to get the same. 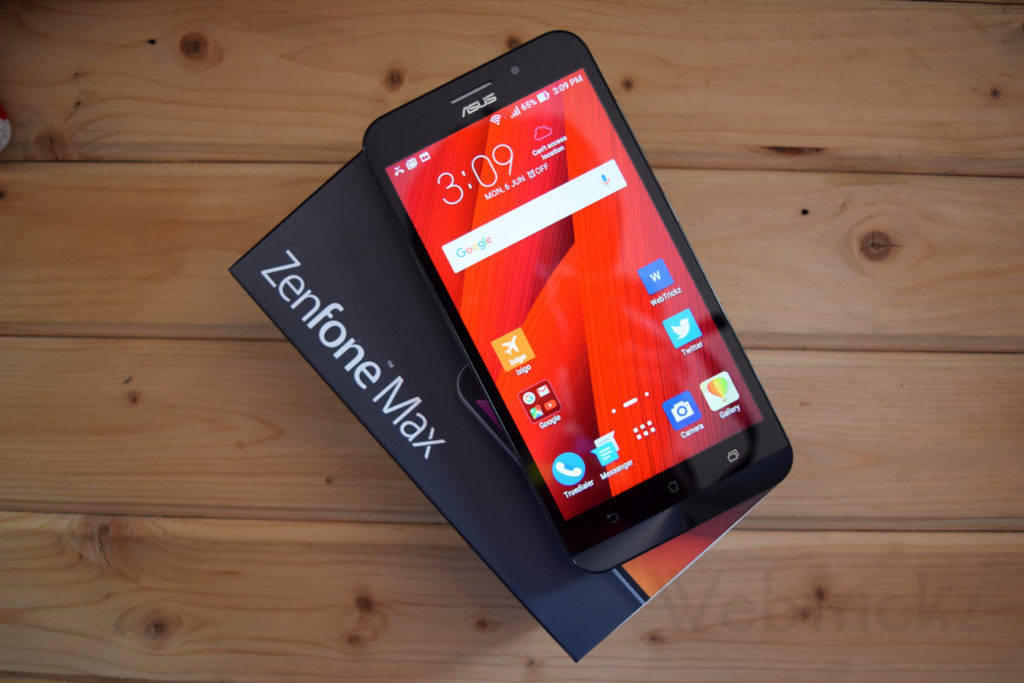 The New Zenfone Max is a device meant for frequent commuters out there who wish to live unplugged and enjoy other aspects of a modern smartphone at the same time. The Zenfone Max 2 was launched a few weeks back in India in 2 variants – 2GB RAM & 3GB RAM priced at Rs. 9,999 and Rs. 12,999 respectively. Asus being kind enough has retained the pricing of the older version with Zenfone Max 2, despite packing it with some worthy upgrades. We’ve been using this phone for a while now and it’s now time to share our detailed review! 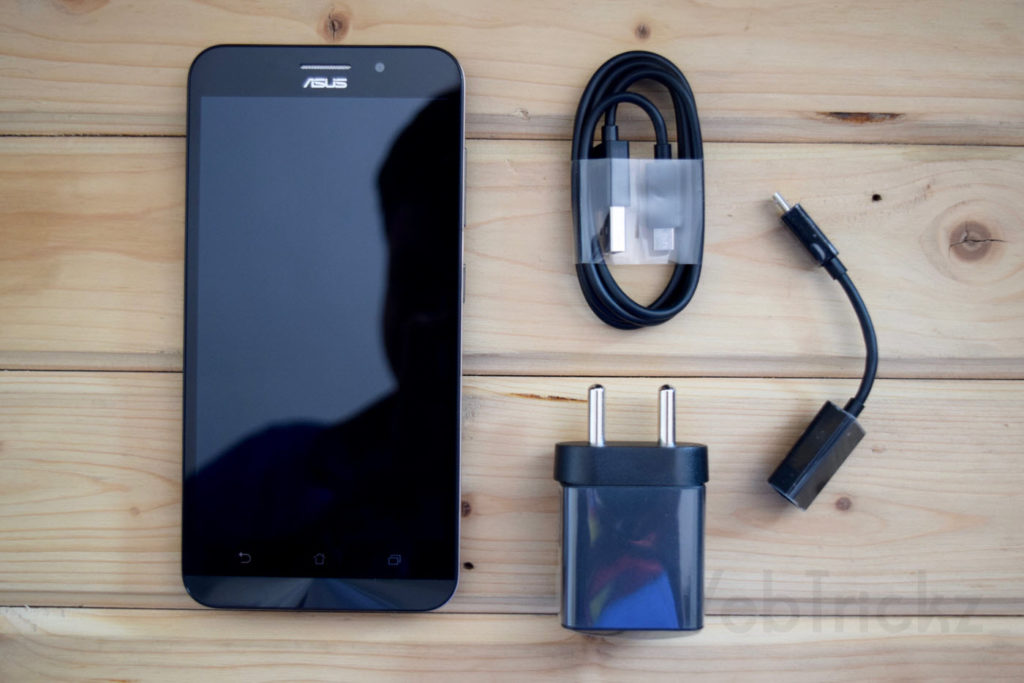 Inside a good looking box, there is a handset, charger, micro USB cable, OTG cable and documentation.

Nothing has changed when we compare the design and form factor of the new Zenfone Max with the older version. The phone looks surrounded by a metal frame but it’s plastic with a gold metallic finish that feels smooth and gives it a premium look. The removable back cover made of faux leather with a subtle texture offers a good grip and adds to the overall beauty of the device. The rounded corners and curved back at the edges make it comfortable to hold. Like other Zenfone phones, the Max has thick bezels and comes with 3 capacitive keys that aren’t backlit, and right below them is a shiny plastic strip with a reflective concentric circles pattern. A LED notification light is there at the top front.

The right side of the phone houses the volume rocker and power key with a textured pattern. There is nothing on the left side. The top side has a 3.5mm audio jack while the micro USB port is at the bottom. Coming to the back, we have the camera in the middle with a dual-tone LED flash and laser autofocus on either side of it. The Asus branding flaunts right below followed by a speaker grille that produces good sound. The leather-like back cover can be easily pulled off using the provided indent, below that you’ll find the slots for Dual micro-SIM cards and microSD card. Color options include Blue, Orange, White, and Black.

Overall, the build quality looks pretty solid and impressive. However, it’d have been better had the phone packed some real metal up its sleeve! 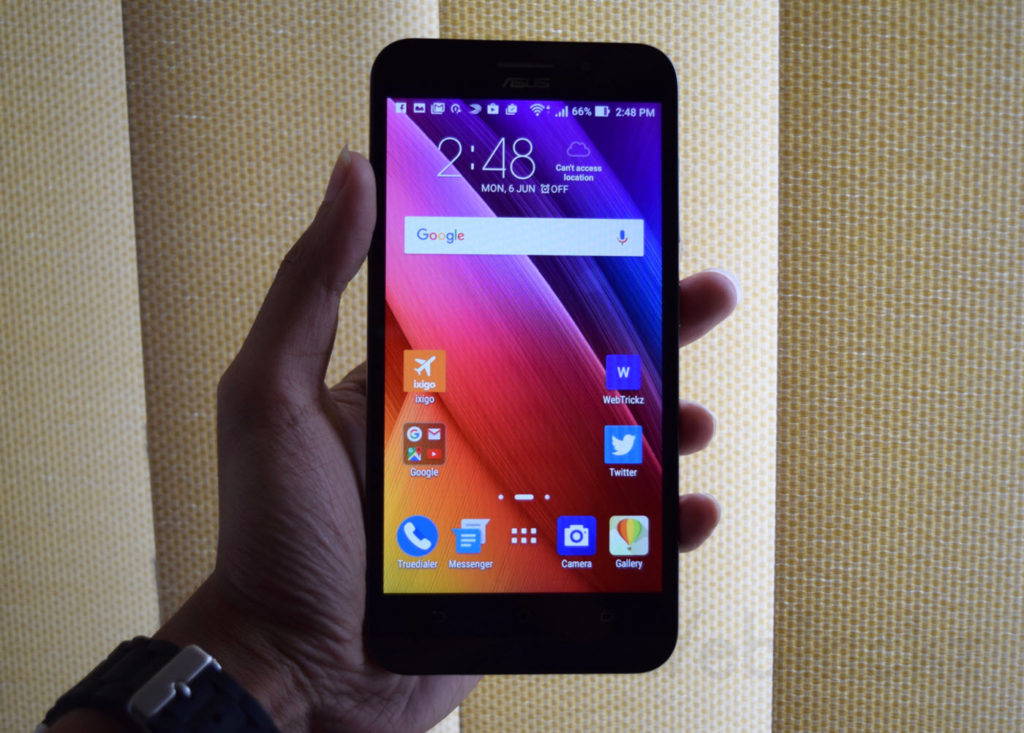 Some might be disappointed to hear that the new Zenfone Max ships with a 5.5-inch HD IPS display when the likes of Redmi Note 3, Meizu M3 Note, Le 1s in the same price segment are offering a Full HD display. If you believe us, the 5.5″ 720p display on this phone looks way good. Despite a lower screen resolution, the display looks sharp and bright enough with good viewing angles. The front is scratch-resistant and has an anti-fingerprint coating.

There is a Splendid app that helps in customizing the color temperature and the Bluelight Filter comes handy during night time to reduce the strain on your eyes. There is a Glove mode that comes in handy when operating the phone with gloves. The screen looks vivid with right color saturation levels, and overall we’re happy with Max’s display.

The Zenfone Max runs on the feature-packed Asus Zen UI based on Android 6.0.1 Marshmallow. But you won’t find any visible changes in the Marshmallow-based UI as it’s heavily customized by the company. ASUS ZenUI 2.0 with over 1000+ software enhancements is deeply enhanced with custom user interfaces, pre-loaded apps, tons of settings, tweaks, and options that you can spot in every corner of the OS. The phone comes with a lot of pre-installed apps from Asus which could hinder the user experience especially if you’re coming from stock Android. Few of the pre-loaded apps can be uninstalled while you can disable the rest if needed. The UI is functional but looks overdone at times.

Marshmallow brings the “App Permissions” feature that allows you to control which specific apps can access other apps on your phone. Besides some of the interesting options above, there are a couple of apps like Mini Movie, Photo Collage that are well integrated with the system Gallery app so you can easily create collages and mini clips right from the gallery.

The Zen UI has numerous options and tweaks such that their inclusion eliminates the need to download third-party apps. The impact of this heavily customized OS can be noticed on the phone with 2GB RAM as sometimes there were slight lags when launching and switching between apps. Overall, the software works smoothly and we didn’t encounter any app crashes or major lags. I like the fact that Zen UI has a distinctive identity of its own and it doesn’t resemble any of the UI’s loaded on every other phone from Chinese brands.

Zenfone Max 2 is powered by Snapdragon 615 Octa-core processor clocked @1.5GHz with Adreno 405 GPU, a prominent upgrade from its predecessor that came with Snapdragon 410 and Adreno 306. It comes with 2GB of RAM though Asus has now introduced a 3GB RAM variant as well. The internal storage has been upgraded to 32GB from 16GB which is further expandable up to 64GB via microSD card. Despite running a heavily skinned UI, the phone delivers a smooth performance without any noticeable lags while browsing, multitasking, and video playback. However, under prolonged usage, there was a slight delay when opening several apps at once. Taking about gaming performance, it’s better than we expected. The Adreno 405 GPU seems to perform well as there were no frame drops or stutters while playing games like Dead Trigger 2, Freeblade for over 30 minutes. We even played high-end games like Asphalt 8 and to our surprise, the performance was amazing without any major frame drops or lags. Moreover, the device does not have any heating issues even while gaming. 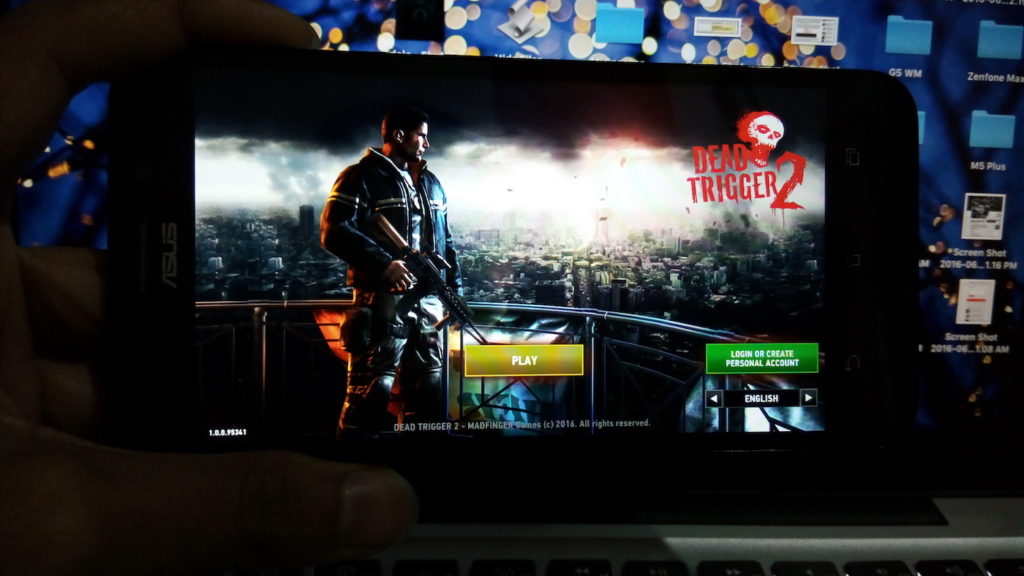 Out of 2GB RAM, in our case average memory used was 1.5GB and out of 32GB storage around 24GB of free space is available for the user. The device clocked a score of 39903 in Antutu Benchmark test. There is a ‘Performance mode’ in settings that one can switch to for a better experience. In our opinion, the overall performance of the phone is satisfactory.

Coming to the main aspect, a 5000mAh Li-polymer non-removable battery powers up the Zenfone Max. Besides packing a massive battery, Asus has optimized the software so well that the phone truly manages to deliver a long-lasting battery life. In our 1st test, the device lasted for over 2 days on a single charge with a screen-on time of 11 hours. In 2nd test, the device lasted for 42hrs with a screen-on time of 12hrs 40min leaving us surprised and impressed at the same time. This was under moderate usage involving basic tasks such as using social media apps, browsing over Wi-Fi, making calls, gaming, etc. It should also be noted that Asus sent us a Powered on review unit prior to the official launch. The device was running up in airplane mode for over 12 days with 27% battery still left which kind of clarifies their claim that the phone is capable of offering 38 days of standby time.

The battery consumption is smartly managed as the device automatically switches to ‘Super saving mode’ during the night at a pre-defined schedule or battery level. This Smart switch feature helps in saving power while the device is in standby mode during the night and as a result, there was no battery drain overnight. Users can switch to other battery modes such as ‘Power saving’ and can easily customize them as per their preference in settings.

The Zenfone Max also supports reverse charging and doubles up as a power bank letting you charge other devices on the go. An OTG cable is provided for user convenience. The only limitation here is that the phone doesn’t support fast charging and ships with a 5V 1A charger that takes around 4.5hrs to charge it fully. We aren’t complaining though and give a big thumbs up to its battery department. 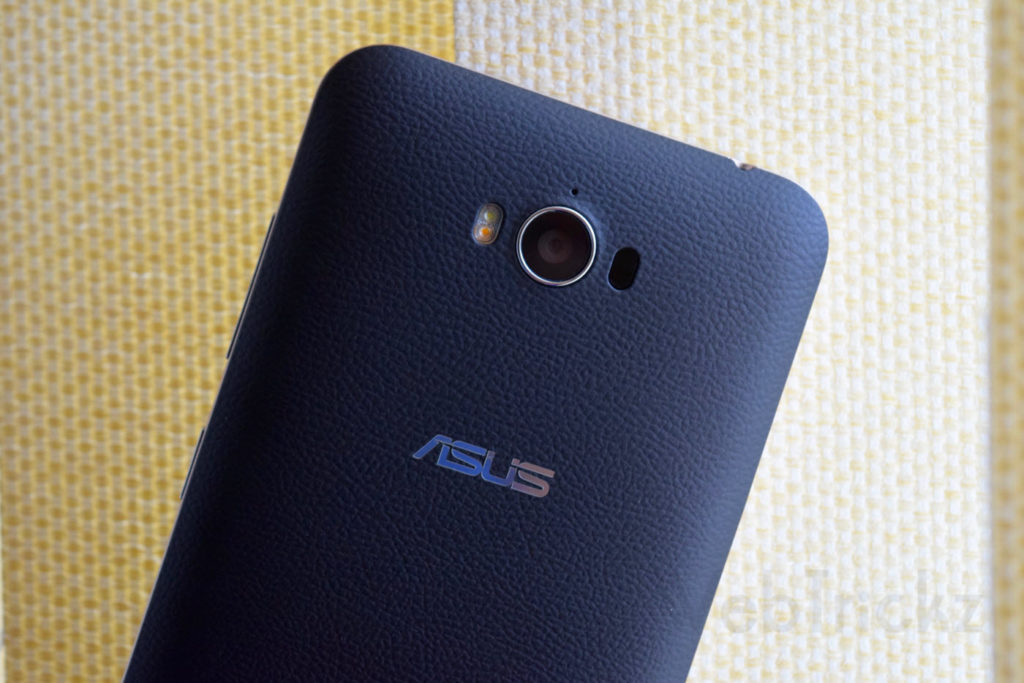 The phone comes with a 13MP rear camera with f/2.0 aperture, laser autofocus, and dual-LED real tone flash. The flash and laser focus module is neatly placed on either side of the camera. The laser auto-focus helps in faster focusing, image stabilization, and during low-light photography up to an extent. The camera does a fairly good job considering the device pricing as photos taken in outdoor conditions came out pretty good with natural colors and a decent amount of details. Indoor shots were equally good but low-light photos reflected some noise which isn’t a concern. The Low light or Owl mode really helps in taking brighter photos in low-lit areas. Overall, the photos captured were bright, sharp, and good in quality. 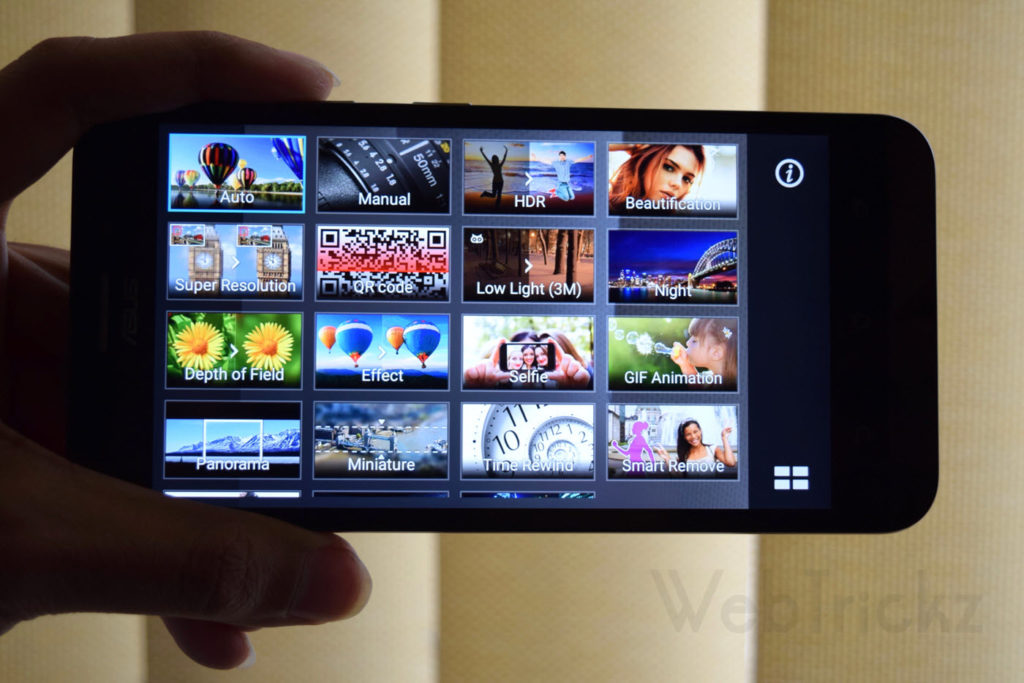 The rear camera can record 1080p video @30fps and slow-motion videos as well. The camera comes with various shooting modes and there is a manual mode too. Coming to the front camera, it’s a 5MP shooter with f/2.0 and an 85-degree wide-angle lens. The selfies taken in daylight and partial light conditions came out really well with the right set of colors, leaving us impressed.

Summing up our review, the Asus Zenfone Max coming at an affordable price of Rs. 9,999 is a promising deal. The new version with an improved Snapdragon processor, 32GB of storage and Marshmallow OS is a worthy upgrade by Asus. At the same time, the likes of Redmi Note 3, Meizu M3 Note, Le 1s, etc. are its strong competitors in the same price segment offering better specifications such as metal body, Full HD display and a fingerprint sensor. However, the main highlight of Zenfone Max remains its 5000mAh battery that delivers an awesome battery life, keeping you unplugged for over 2 days. The phone scores up pretty well in other technical aspects as well. Overall, a recommended buy!