Add Widgetsmith widgets to your iPhone home screen for a customized look.

Following the release of iOS 14, a lot of third-party widget apps have emerged on the App Store. Of all these apps, Widgetsmith has stood out and seen a tremendous response from iOS users in just a few days. With Widget Smith, you can create highly customizable widgets and personalise your iPhone home screen as you like. Widgetsmith offers a host of interesting widgets in three different sizes.

In addition to basic widgets such as time, date, calendar, and weather, Widgetsmith lets you add Health and Photo widgets to your home screen. Widgetsmith’s “Step Count” widget integrates with Apple Health app to show the daily steps and distance (walking + running).

While Widgetsmith is by far the best app to customize your iOS 14 home screen, it can initially be a little tricky to use. If you are struggling and are looking to add Widgetsmith widgets to your home screen then don’t worry. Here’s a detailed guide on how to use Widgetsmith on iOS 14.

How to create widgets in the Widgetsmith app

In a similar way, you can create other widgets like Health and customize their style as per your liking.

Moreover, you can edit and configure your previously created widgets using the Widgetsmith app without recreating them. For this, go to the Widgetsmith app and open an existing widget. Make any changes you want and save them. The changes made will instantly reflect on your home screen widget.

ALSO READ: How to add Torch widget to your iPhone Home Screen

How to add Widget Smith widgets to the home screen

Once you’ve created the widgets, go ahead and add widget smith to your home screen. To do so, follow the steps below.

It’s worth noting that if you’re adding or editing a small widget, then you can only replace it with a small-size widget.

RELATED: How to change the color of your app icons in iOS 14

How to add a photo widget on Widgetsmith

You can use Widget Smith for photos to add a photo widget in iOS 14 on your iPhone or iPad. The Photos widget lets you display a single photo or selected photos from a particular album on your home screen. The pictures from the chosen album such as Favorites shuffle automatically every 15 minutes.

To display a photo or album on your home screen using Widget smith,

In case you want to change the display photo later, you can do so easily within the existing widget. Just open Widgetsmith, select the photo widget and choose a different photo to replace it with the current one.

ALSO READ: How to bypass Shortcuts when using custom app icons in iOS 14

How to delete widgets in the Widget Smith app

At some point in time, the Widgetsmith app may get stuffed with tons of widgets that you might not want anymore. Well, if you are looking for a way to delete Widgetsmith widgets then that’s possible.

Can I remove Widgetsmith’s name from home screen widgets?

Most of us are looking for a way to hide the widget name text displayed under the widgets in iOS 14. Unfortunately, it turns out that you cannot get rid of the Widgetsmith name under widgets.

This is due to an iOS restriction and the widget app developers have no control over this thing. It’s certain that the widget name appearing below all the widgets spoils the aesthetics but we’ve to deal with it, at least for now.

Here’s a reply to this query from David Smith, the creator of Widgetsmith. 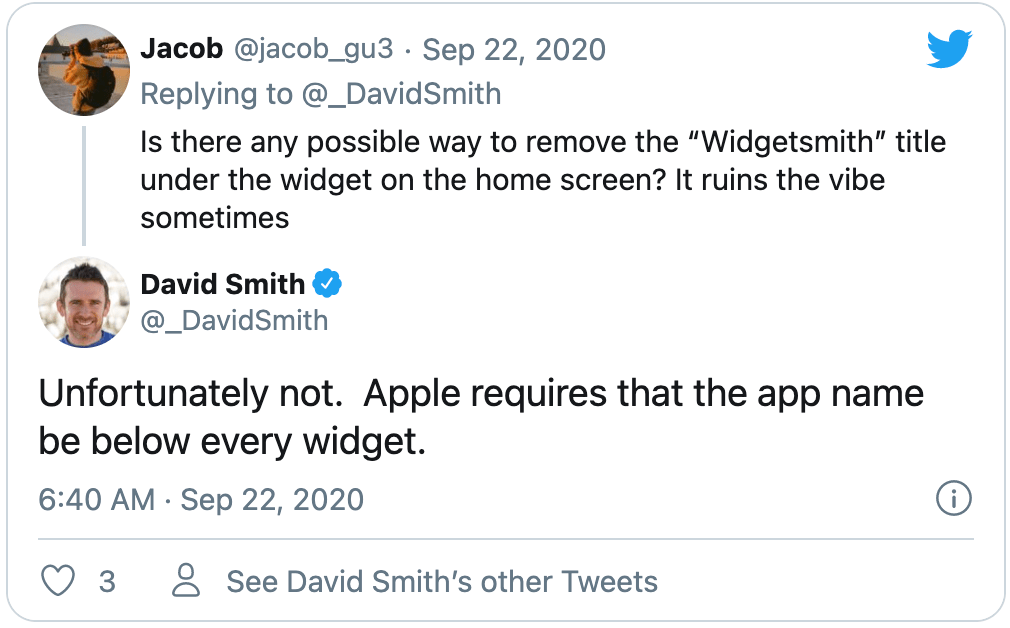 So, if you want to remove Widgetsmith text from the home screen widgets then that’s not possible.

ALSO READ: How to set multiple wallpapers in iOS 14 on iPhone

Why do my widgets turn black or grey?

3rd party widget apps on iOS 14 aren’t perfect yet and hence a glitch can happen at any point in time. Most often you will notice widgets turn grey or black in colour when using apps like Widgetsmith, ColorWidgets, and Photo Widgets. Moreover, widgets might start flashing or flickering and can even disappear in some cases.

If you’re seeing grey or black Widgetsmith widgets instead of the content then don’t worry. This can happen when the content to be displayed isn’t accessible by the widget app. Or when you haven’t selected the right widget to show on your home screen.

Below are some tips to fix the black widget box issue in iOS 14.

Is Widget Smith safe to use?

Are you reluctant to use Widgetsmith due to privacy or security concerns? Worry not!

Speaking of Widgetsmith, the app has risen to popularity right after the final release of iOS 14. Widgetsmith is currently the #1 app on the App Store’s Productivity list and has fetched a 4.6 rating with over 53K positive reviews. Just make sure you download the right app and not a name-alike ripoff like “Widgetsmith – Color Widgets”.

Hope you found this guide helpful. Do share your views in the comments below.