Set dynamic wallpapers on iPhone that change automatically at a set time.

UPDATE (15 Sep 2022) – iOS 16 brings a host of customization features for the Lock Screen including third-party widgets. There is also a new ‘Photo Shuffle’ option that lets you pick a dynamic set of photos that shuffle as you use your iPhone throughout the day. You can choose the shuffle frequency and select photos manually to have multiple Lock Screen wallpapers on your iPhone.

The built-in wallpaper shuffle feature makes it really easy to change the Lock Screen wallpaper automatically in iOS 16 on iPhone.

Now let’s see how you can change wallpapers automatically on iOS 16.

That’s it. If you’ve set shuffle frequency to ‘On Tap’ then simply tap the screen to switch between lock screen wallpapers (while your iPhone is unlocked).

How to remove blur from iPhone Home Screen

Blur is applied to the home screen by default. To disable or turn off the blur effect for home screen wallpaper in iOS 16,

The blur effect now won’t be applied to any of the home screen wallpapers you’ve set to rotate.

How to customize an existing Lock Screen in iOS 16

You can also modify your Photo Stuffle setup at any point in time. This way you can add new photos later on or remove the existing ones. To do so,

Besides, see how to resize a photo for iPhone wallpaper and change wallpaper in iOS 16.

Follow the below method instead if your device is running iOS 14 or iOS 15.

iOS 14 makes it possible to significantly change the look of your iPhone and iPad. One can use custom app icons along with home screen widgets from WidgetSmith to customize their iOS device appearance. That said, there is still no way to have multiple wallpapers on iPhone that can change over time or every few minutes. While you can always manually set a new wallpaper, however, that isn’t feasible for people who love cycling through new wallpapers.

Can I get multiple wallpapers on iPhone?

What if you can set multiple wallpapers on iPhone that can automatically change throughout the day, at sunrise, or sunset? By doing so, you can have multiple pictures as wallpaper, both for the lock screen and home screen.

Thankfully, in iOS 14.3 or later, you can use the Shortcuts app to shuffle between multiple backgrounds or photos on iPhone or iPad. This is similar to making a slideshow of different wallpapers that change on their own at preset time intervals. Note that there is still no way to set a different wallpaper for each home screen on iPhone. You can, however, rearrange and delete home screen pages in iOS 15.

Without further ado, let’s see how you can enable multiple wallpapers in iOS 14 on iPhone and iPad.

How to have multiple backgrounds in iOS 14 on iPhone

Create an album named “Wallpapers” in the Photos app. Then move all the wallpapers you want to rotate through to that album.

Go to Settings > Shortcuts and enable “Allow Untrusted Shortcuts”. Hit Allow and enter your passcode to change the setting. 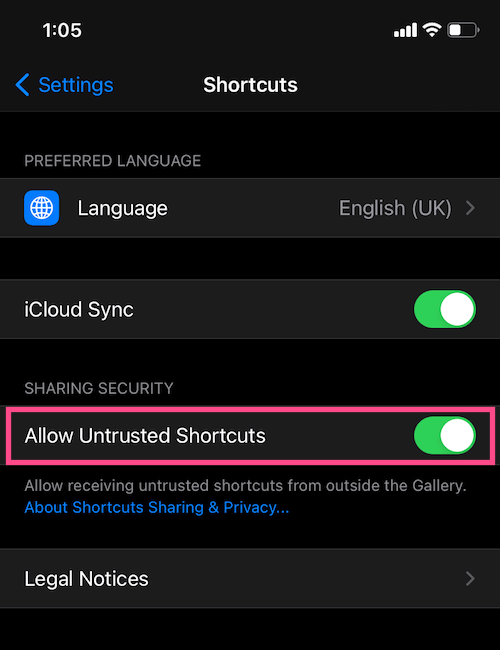 The shortcut to change the wallpaper is now ready. Check the next step to set up automation.

Step 4 – Set up an Automation in Shortcuts

Now that you have set up the shortcut, it’s time to create an automation to let the wallpaper shortcut run itself at a certain time. This way you can set wallpapers that change with the time of day. For this,

That’s it. The home screen and lock screen wallpaper will now change at the set time. You will also get a Shortcuts notification about the automation running.

BONUS TIP: If you want the background to change multiple times in a day then repeat Step 4 to create more automation. This way you can trigger the same automation at different times.

You can also add the “AutoWall” shortcut to your iPhone’s home screen to quickly switch between wallpapers or photos from an album. Doing so will let you change the wallpaper with a single tap whenever you want. Moreover, you don’t have to wait for the automation to run at a given time.

To add AutoWall shortcut to the home screen,

Hope you found this guide helpful.