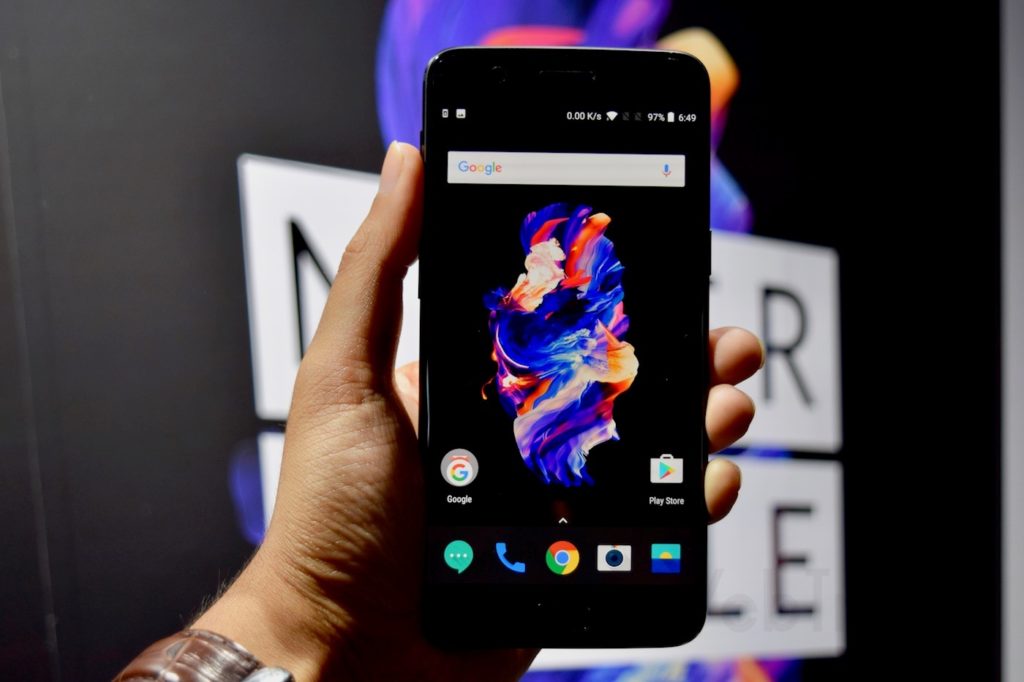 OnePlus’s latest flagship “the OnePlus 5” is finally launched in India and we got to witness the live launch of this much-awaited and hyped smartphone. Though, we will be posting a proper review of the OnePlus 5 later but can’t hold to share our first impressions after having got our hands on the OnePlus 5. The device comes in 2 variants – 6GB RAM and 8GB RAM. We got to try the 8GB variant of the phone that packs 128GB of storage and retails for Rs. 37,999 whereas the base model retails for Rs. 32,999 in India. The OnePlus 5 open sale starts on June 27th where it will be sold on Amazon as well as oneplusstore.in and OnePlus Experience Store. Despite being the priciest OnePlus phone, the OnePlus 5 is still miles cheaper as compared to the popular flagships such as Samsung Galaxy S8, LG G6, HTC U11, and iPhone 7. Now let’s see how different is the OnePlus 5 than its predecessor along with the key offerings and shortcomings. 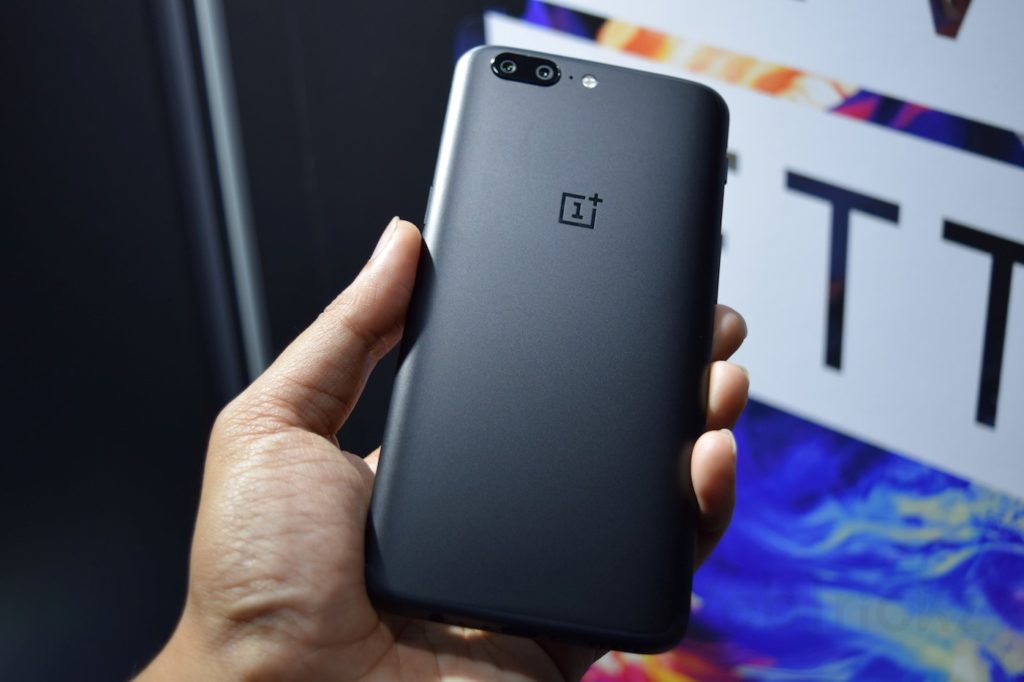 The OnePlus 5 is facing criticism for its design language that mimics the look of Apple’s iPhone. That’s mainly because of the dual-camera setup at the back and the antenna lines positioning at the top and bottom that pose a strong resemblance to iPhone 7 Plus. However, the front of the phone looks very similar to OnePlus 3T and has a fingerprint sensor integrated into the home button. The metal unibody looks extremely slim at 7.25mm and now has more rounded corners and curvy edges that make for a comfortable grip. It flaunts a fine matte finish that feels very smooth but is quite slippery too.

On either side of the home button are backlight capacitive keys whose order can be swapped. One can optionally enable the on-screen keys for navigation and disable the physical home button. The fingerprint sensor is said to unlock the device in 0.2s but we couldn’t test its speed and accuracy at the event. As usual, there is an alert slider, Dual nano-SIM support, and USB Type-C port for charging. That said, though the design borrows clues from iPhone, it looks refined and can woo users who look upon an iPhone but either can’t afford it or prefer the Android experience.

The OnePlus 5 sports a 5.5-inch Optic AMOLED Full HD 2.5D display with Gorilla Glass 5 protection on top. OnePlus has refrained from using a 2K screen and the display panel is reportedly the same as the one found on 3T. There is a pre-applied screen protector that would help prevent unwanted scratches. The display looks bright, crisp and offers the DCI-P3 color calibration profile in addition to the standard and sRGB. It features a reading mode and night mode (more under software). 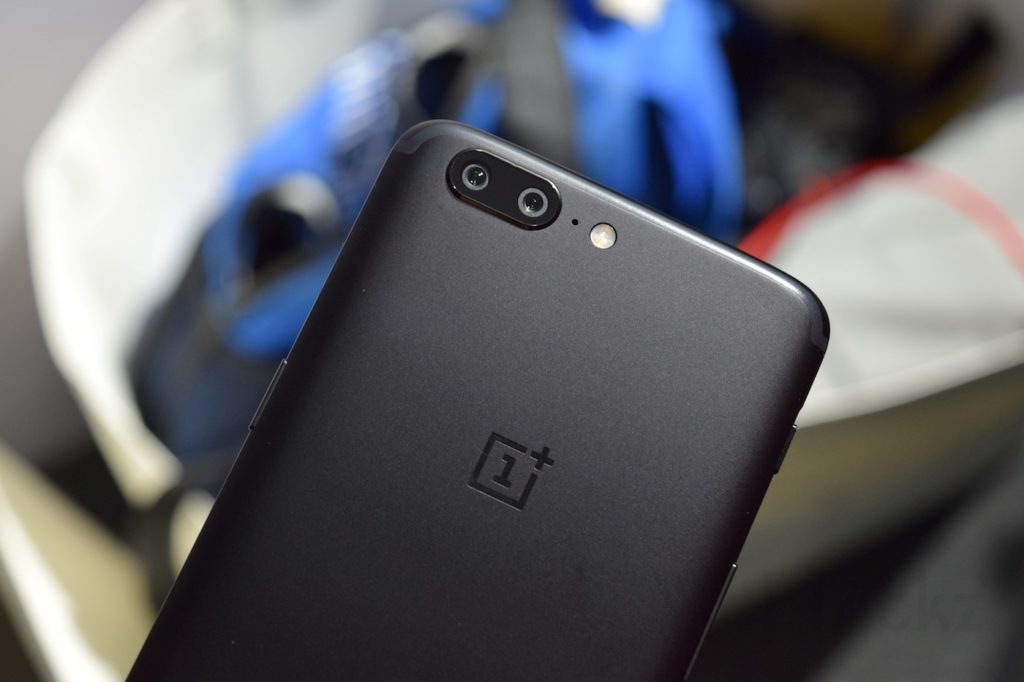 The rear dual-camera setup that powers the “Portrait mode” is perhaps the biggest upgrade on the OnePlus 5 with a combination of 16MP f/1.7 wide-angle lens and 20MP f/2.6 telephoto lens. The company claims 2X lossless zoom with 1.6x optical zoom while the remaining 0.4X is achieved through SmartCapture technology. The rear shooter supports Portrait, Pro mode, HDR, Time-lapse, RAW Image capture, 720p Slow-motion video at 120fps, 4K video at 30fps, and 1080p video at 60fps. It comes with EIS but there is no OIS. In our brief test, the focusing was quick and shots taken in Portrait mode looked bright and clear with a nice bokeh effect. Below are a few samples showing the OnePlus 5’s Portrait mode.

Talking about the front camera, it’s a 16MP shooter with f/2.0 aperture, EIS, and screen flash. There are some useful modes like HDR, Face Beauty, and Smile Capture. We found the selfie camera way impressive as selfies taken in partially-lit indoors looked excellent with plenty of details and accurate colors.

Having said that, the dual camera looks promising and a significant upgrade over the last year’s 3T. We look forward to exploring the camera to its fullest ability in our review. 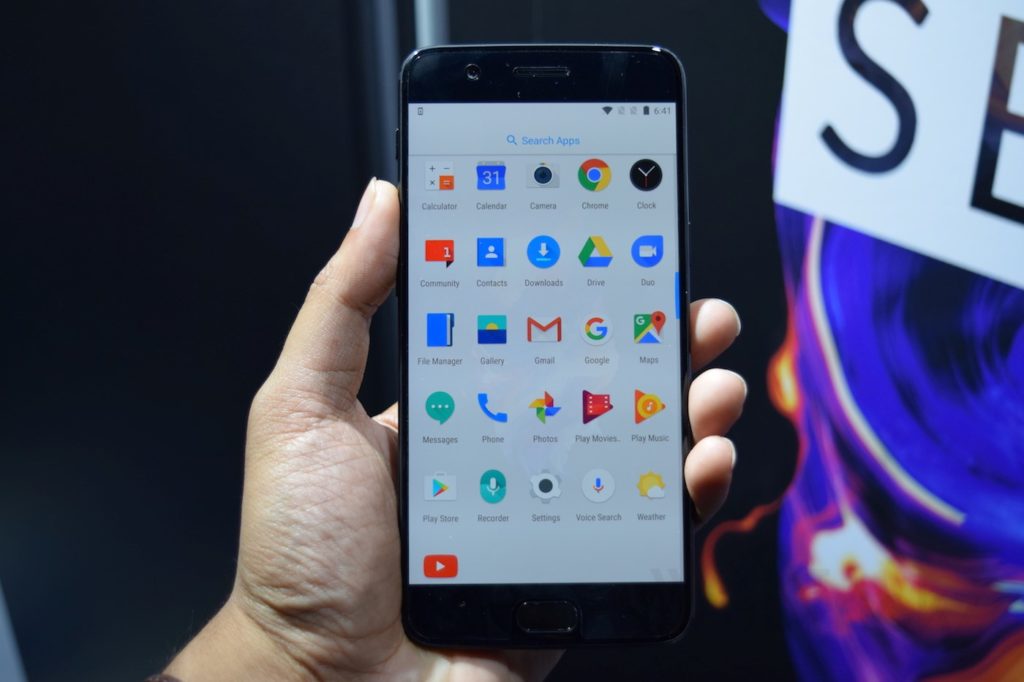 The phone runs on Oxygen OS 4.5.1 based on Android 7.1.1 Nougat. The UI offers a near-stock Android experience with a few minor additions to keep the overall functioning as smooth as possible. The OS looks the same but now comes with a revamped launcher, Reading mode, QuickPay via Paytm, Secure Box, Gaming DND, App Priority, option to set vibration intensity, and expanded screenshots.

The reading mode optimizes the color temperature according to the lighting condition through gray-scale mapping and filtering of blue light. One can enable it manually or for specific apps to work automatically. Gaming DND mode blocks notifications and disables on-screen keys to prevent accidental taps. One can set Gaming Do Not Disturb mode to automatically turn on for selected apps or games.

One can also assign specific actions for long pressing and double-tapping the home, recent, and back button. There are some useful gestures like Flip to mute, double tap to wake, swipe with 3-fingers to take a screenshot, option to choose desired apps to open via draw gestures.

The OnePlus 5 is powered by a Snapdragon 835 Octa-core chipset clocked at 2.4GHz with Adreno 540 GPU. This is one of the most powerful SoC that is found in premium flagships like Galaxy S8/S8+, Xperia XZ Premium, HTC U11, and Xiaomi Mi 6. Coupled with 6GB or 8GB of LPDDR4X RAM, the phone ran very smoothly in our short duration with the device. There is 64GB or 128GB of UFS 2.1 2-lane storage that helps further. Out of 128GB, there is 111GB of space available for usage whereas out of 8GB RAM, the average used memory amounted to 1.9GB on clearing the recent apps. A 3300mAh battery is equipped with OnePlus’ Dash Charge technology that claims to offer a day’s power in half an hour of charging.

What sets the OnePlus 5 apart in its price range is the wide support for network bands. In terms of connectivity, it packs 2×2 MIMO, Wi-Fi 802.11 a/b/g/n/ac (2.4/5GHz), Bluetooth 5.0, NFC, GPS, GLONASS, aptX/aptX HD support, and USB OTG. Despite being really thin, the OnePlus 5 continues to include a 3.5mm headphone jack which is a plus point. The phone is also rich in the sensors department. The OnePlus 3 has been criticised for its weak and noisy vibration motor. Paying heed to community feedback, the OnePlus 5 comes with a vastly improved vibration motor which is now 20% quieter and stronger too.

After having covered most of the positive aspects, it’s now time to share our list of shortcomings with the OnePlus 5. First and foremost is the lack of waterproofing which we see as an essential feature in a flagship. The inclusion of IP67/68 would have made OnePlus 5 our most favourable phone, hands-down. Secondly, there is no wireless charging but that’s not a deal-breaker considering even Apple’s latest phone is deprived of this feature. Surprisingly, the camera lacks optical image stabilisation that improves low-light photography, and instead OnePlus has chosen EIS over OIS, similar to Google Pixel. However, we can’t say if moving to EIS is a wise move or not, as of now.

As compared to 3T’s 3400mAh battery, the OnePlus 5 has a relatively lesser capacity battery. Moreover, there is no option for storage expansion as the phone lacks support for a microSD card. Although it has reduced size bezels, the top and bottom bezels are wide enough, making the OnePlus 5 appear ordinary in front of the S8’s Infinity Display. Coming in Midnight Black and Slate Gray color, we hope OnePlus adds more color options. What’s disappointing is the fact that you can’t really choose between the two colors options unless you’re willing to opt for the higher variant or sacrifice on RAM & storage to get your desired color. That’s because the Slate Gray color is tied to the 6GB RAM model while the Midnight Black variant is tied to the 8GB one. Also, both the colors look highly identical with a subtle color difference.

Starting at Rs. 32,999, the OnePlus 5 certainly ticks most of the right boxes but at the same time, it misses a few key ingredients of a flagship smartphone. When compared with its predecessor, it’s evident that the OnePlus 5 is not a mighty upgrade for those already using the OnePlus 3 or 3T. It is quite disappointing to see the company with the “Never Settle” tagline settling in certain ways. In our brief usage, we didn’t find the OnePlus 5 to be a flagship killer but the smartphone still continues its value for money proposition with top-of-the-line hardware, especially the processor and camera. That said, we would limit our opinions on OnePlus 5 until we test it completely and come up with a detailed review. Stay tuned!