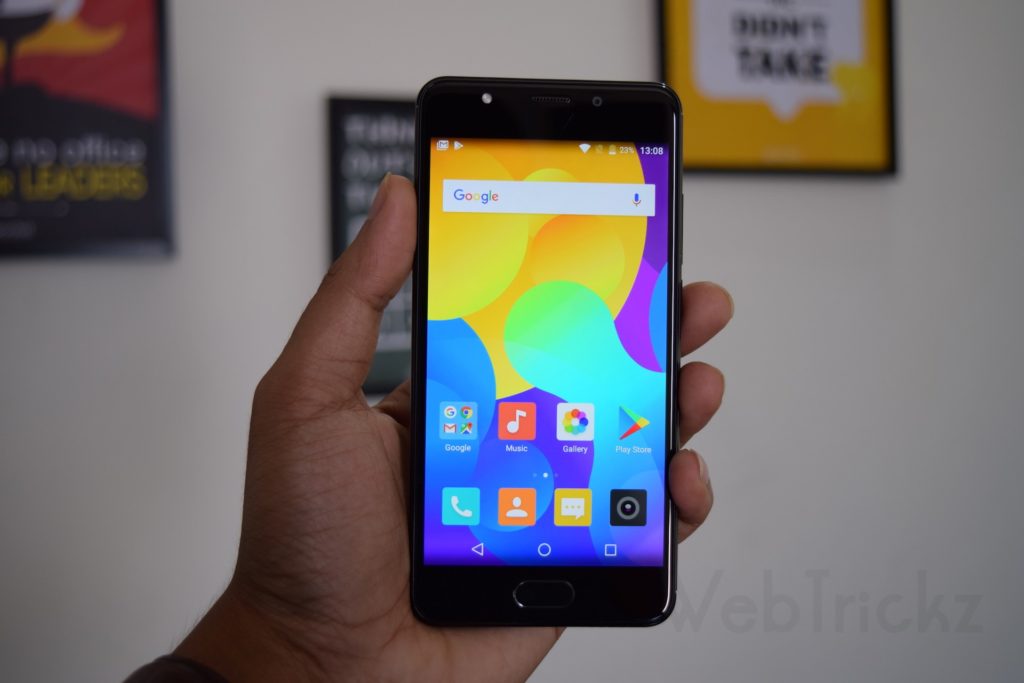 Back in June, Micromax’s YU brand made a comeback with the launch of “Yureka Black” after a long period of almost a year. The company was initially well-received for its varied range of handsets in the budget price segment such as the Yureka, Yuphoria, and Yunicorn. However, following the entry of numerous Chinese brands, YU had to face tough competition from its rivals as that particular segment was captured by Chinese phone makers. The Yureka Black is YU’s attempt to regain the lost glory in the mid-range category which is very popular in India. The phone focuses mainly on design in addition to competitive specs and is an online exclusive like before. Coming at Rs. 8,999, is the Yu Yureka Black capable enough of making a dent in the combative sub-10k phones market? Let’s find out in our review! 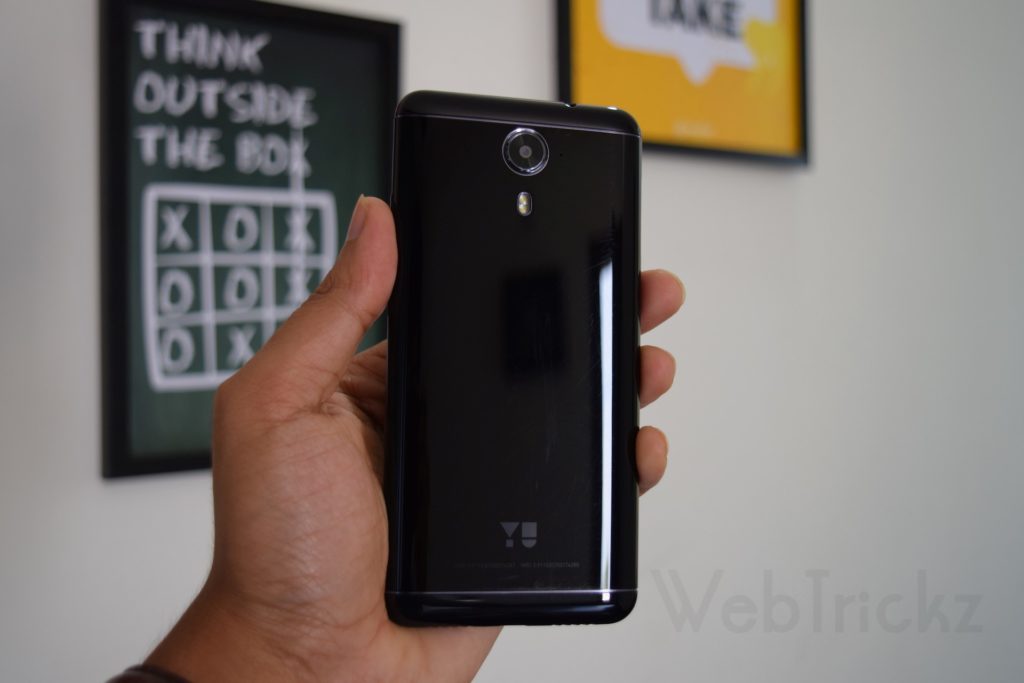 As compared to the original Yureka with a sandstone-like finish, Yu Black is significantly different in design. Featuring a metal unibody, the phone flaunts a piano black body with a smooth and glossy finish that certainly looks and feels premium. Coated entirely in black colour, the Chrome Black variant strongly resembles the Jet Black iPhone 7 and hence is easily prone to scratches. Thankfully, a transparent case comes bundled that one should apply. Due to its glossy and mirror-like finish, the device is susceptible to fingerprints, smudges and is very slippery in nature. However, the curved back including the rounded corners and sides makes for a secured grip and offers one-handed usage.

The front packs a 2.5D curved display that looks elegant and blends seamlessly with the frame. Alongside, there is a selfie flash, LED notification, and a physical home button with an integrated fingerprint sensor and chrome lining around it. There are no capacitive buttons as the device uses on-screen navigation keys. The power key and volume rocker placed on the right, offer nice tactile feedback. The Hybrid Dual SIM tray is on the left. The top houses the headphone jack whereas the micro USB port and speaker grille are at the bottom.

Moving to the back, the top and bottom panels are made of plastic but carry the exact same finish. A pair of chrome lines run across these panels that look similar to antenna lines. The circular-shaped primary camera module protrudes slightly and is surrounded by a metal ring. The subtly printed YU logo at the bottom is a small but noteworthy addition. Measuring 8.7mm in thickness and weighing 152 grams, the YU Black looks classy, lightweight, and solidly built, without compromising on ergonomics. 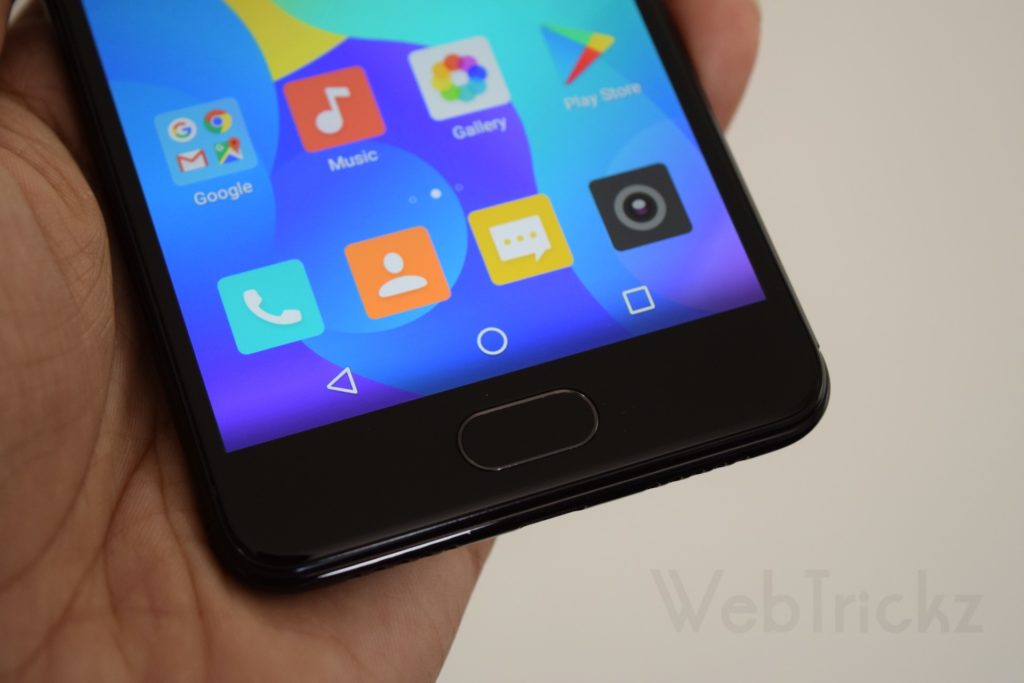 The Yureka Black sports a 5-inch Full HD IPS display at 441ppi with 2.5D curved Gorilla Glass 3 protection. The inclusion of a 1080p panel at this price point is a welcome addition. The display is bright enough, crisp, and produces vivid colours. The viewing angles and visibility under sunlight too are decent. However, the colour saturation is not the best and the display is on a warmer side with a noticeable yellowish tone. Surprisingly, there is no option to adjust the color temperature under display settings which is a bummer. One can optionally enable adaptive brightness, ambient display and switch the order of on-screen navigation bar keys. The touch response felt decent but not great. Overall, the display is fairly good but certainly not the best in its range.

Those expecting Nougat will be disappointed to see the Yu Black running on Android 6.0.1 Marshmallow out of the box in mid-2017. Moreover, the phone now runs with a custom UI on top as opposed to Cyanogen OS which used to be the USP of initially launched YU devices like Yureka. Like most Chinese UIs, there is no app drawer and all the apps are laid out on the home screen. Thankfully, there is no bloatware plus the settings and notification shade retains the stock look. That said, the icons don’t look appealing and there are hardly any customization options to tweak the same. We also noticed ads being displayed in the notification panel with app suggestions, which is something unacceptable.

Thankfully, a beta build of Android 7.1.2 Nougat is available for Yureka Black users to test. The firmware needs to be installed manually which requires unlocking the bootloader and other steps. Hence, it’s recommended to wait for the official update which should be rolling out to users, anytime soon.

The software includes Smart Gesture and Smart Action such as double tap to wake up, double click on the home button to lock screen, flip to mute, and flip to snooze. Few other handy tweaks include schedule power on and off and 3 fingers swipe up or down to take a screenshot, including scrolling ones.

Powering the Yu Black is the Snapdragon 430 Octa-core processor clocked at 1.4GHz with Adreno 505 GPU. It’s one of the best low mid-range chipsets in terms of performance and efficiency than the MediaTek ones. This is paired with 4GB of RAM which is at par with most devices in this price range. There is 32GB of storage that is expandable via a microSD card. Out of 32GB, there is 22.5GB of space available for usage and the average free RAM amounts to 2.2GB on closing all apps. To our surprise, the phone performs day-to-day tasks efficiently without any signs of lag or hiccups. Apps are quick to load and the adequate RAM aids in smooth multitasking even with numerous apps running in the background.

Gaming performance is equally promising. In our test, the device easily managed to run even high-end games like Asphalt 8 and NFS No Limits without any stutters or frequent frame drops. The phone can tend to heat though during prolonged gameplay which is normal. In synthetic benchmark tests, it did pretty well with a score of 44501 in AnTuTu and 2040 in the Geekbench 4 multi-core test. It also packs most of the standard sensors like Accelerometer, Gyro, Compass, Proximity, and Light sensor.

The front-ported fingerprint sensor is a capacitive one that also acts as a physical home button. The fingerprint scanner is fast, accurate enough, and allows registering up to five fingerprints. The sensor also supports certain touch gestures like single tap and swiping for the back action.

Speaking of audio, the phone sports dual grilles but only one of them houses the speaker. The loudspeaker is reasonably loud for a small room and produces a decent audio quality. A pair of basic earphones is also bundled which is a rarity among similarly priced phones.

In daylight and well-lit indoors, the photos captured looked good with a decent amount of detail. Thanks to PDAF, focusing is quick and accurate. However, the colours look oversaturated and images taken in HDR mode look way aggressive. Those taken in low-light exhibit visible noise and focusing was slow but still, they’re usable.

The 8MP front camera is capable of taking fairly good selfies, both in bright outdoors and artificial lighting. The Face Beauty mode kinda impressed us as the facial tone was close to natural. The front flash further helps in taking bright selfies in dark conditions and the flash isn’t so harsh on the eyes. One can easily switch between both the cameras by swiping upwards or downwards.

Overall, the camera does a satisfactory job in its range but don’t expect too much.

The Yureka Black packs a 3000mAh non-removable battery which combined with Snapdragon 430 SoC makes a good combo. The battery life is fairly good but not remarkable. When fully charged, the phone can offer 10-12 hours of backup under normal to moderate usage, involving routine tasks like calling, messaging, browsing, accessing social media apps, listening to music, and a bit of gameplay. We noticed the quick battery drain while playing heavy games and the battery tends to dip overnight. There is no fast charging support and it takes nearly 2 hours to completely charge using the supplied 1.5A charger.

Priced at Rs. 8,999, the Yureka Black is a value for money offering that ticks most of the right boxes. The phone excels in terms of design, solid build quality, reliable performance, along with certain hardware features like Full HD display and 4GB RAM which isn’t common in its category. Moreover, it packs capable cameras that are good enough if not the best. The device also has an edge over the similarly priced Redmi 4 in terms of display, RAM, and overall looks. However, Xiaomi’s Redmi 4 has the added advantage of significantly better battery life and customizable software. That said, Yureka Black remains at par as there is no flash sale involved and one can easily buy it anytime from Flipkart.