by Mayur Agarwal
in iPhone 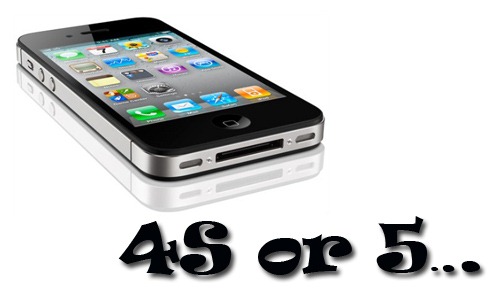 The iPhone 4S recently hit the smartphone market, but it was not quite as popular as people thought it would become. Many customers are asking “where is the iPhone 5?” as they continue to hold onto their iPhone 4. Whether you feel you deserve a new iPhone or actually need it, you may still want to hold out until you can get your hands on the iPhone 5 instead of upgrading to the 4s. Many were disappointed by the release of a 4s phone instead of the 5. Unfortunately, that might just mean Apple will need to create and release the phone into the general population a little sooner than they had anticipated.

Why not the iPhone 4S?

This new version of the iPhone only has a few new features compared to the iPhone 4. Many people feel that they were only upgraded by a few megapixels; although some mega-geeks would argue that a new phone is a new phone. Any iPhone is hard to toss back into the sea, but many iPhone users have said they wish they spent their money on something bigger and better like the iPhone 5 is supposed to be.

Why wait for the iPhone 5?

Many phone critics are telling users to just wait. That’s because they are expecting Apple to release something bigger and better than the iPhone 4s. The new release was simply a small upgrade from the last iPhone and users want more of a change. Some of those changes are anticipated to be huge. These are just a few reasons to wait:

There is nothing tangible that Apple is releasing that gives anyone a sneak peek behind the production of the iPhone 5. One thing you should note is that Apple has always been secretive about their new releases and we won’t have very many details until the official announcements are made. We know the phone is coming, and we know it will be better than the current version – but there isn’t much more speculation we can make.

What should you do?

No one can tell you which phone to hold on to. Upgrading now may mean you’ll have to extend your contract with your current cell phone provider, and then extend it again when the new phone comes out. Unless you’re close to the end of your term already, this likely won’t make a huge difference to you. Many have said that upgrading from the 4 to the 4s is like simply reaching out and touching the 5. At the end of the day, you may simply be better off waiting patiently for the 5 to come out.

About the Author: Dona Collins known as blackberry Girl is a full-time writer with a passion for technology. She currently uses a Blackberry Bold and can’t wait to see what Apple has in store with the iPhone 5.