If you are an iPhone or Android phone user then you must have surely noticed the blue dots. These little blue dots often tend to appear on system apps as well as user-installed apps. Perhaps, if you’re new to either of these mobile OS and wondering why there is a blue dot on your phone then you don’t need to worry.

Why do apps show a blue dot?

The blue dot is actually a UI feature added by developers to seek the user’s attention. It helps in notifying users about a new update, a new notification, an unread message or email, or a pending request. You should not confuse it with a green dot that indicates the active status of a friend in a chat app.

That said, the blue dot isn’t limited to a few services or apps that have been updated recently. Most often smartphone users will find a blue dot on Facebook Stories, Messenger, Instagram, Snapchat, Samsung contacts, and Android messages. You may also see it next to your contacts, emails, and newly added stickers or emojis.

In this article, you will learn what a blue dot means on different services and social media apps.

When viewing the list of viewers on your Facebook stories, you must have noticed a blue dot next to the viewers’ names.

The blue dot next to Facebook story viewer represents a new view(s) since you last checked the views for that particular story. It is an interesting way to notify users who all people recently saw their story.

RELATED: Who are the other viewers on Facebook story

In Messenger and Message Requests

The blue dot in Messenger means that you have an unread chat message(s) from a friend or contact. The notification goes away as you open the conversation and see the message.

In addition, you will see a blue dot next to message requests in Messenger that you haven’t opened yet.

A blue dot in the Messages app on iPhone means that you have unread text messages. The dot appears next to all the messages that you haven’t read yet and goes away once you view them.

Next to sent email on iPhone

It is quite strange to see blue dots next to some of the sent emails in the Mail app on the iPhone. Well, they appear for a reason.

While a blue dot in the “Inbox” indicates all the unread emails. On the other hand, iOS represents all the sent or forwarded emails that you mark as unread with a blue dot. The dot disappears once you read the sent email.

ALSO READ: How to turn off notification dots on Facebook app

Next to apps on iPhone and Android 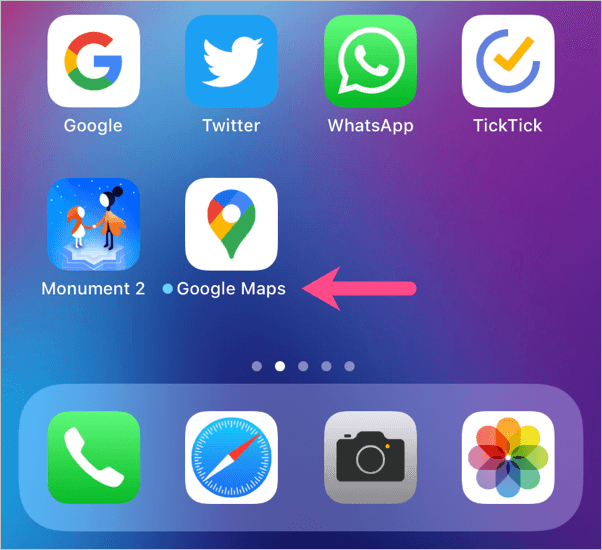 A blue dot appears next to app icons on the home screen for apps that are updated lately but not opened yet. As soon as you open the updated app, the blue dot won’t appear until the next update. Moreover, a blue dot may show up next to newly installed apps on Android.

RELATED: Can I turn off the orange dot on my iPhone?

Similar to Facebook Messenger, a blue dot on Instagram means that you have unread DMs in the Direct Messages. The blue dot will vanish as you open and read the particular DM.

You must have often seen a blue dot next to various filters on Snapchat. The dot indicates that Snapchat has updated or added new filters that you must try out. Once you try the new filter, the little blue dot goes off on its own.

In addition, you will see a blue dot over the “Chat” icon when there is an unread chat message.

On WhatsApp for iPhone

A blue dot over the “Status” tab in WhatsApp means there is a status update you haven’t viewed yet. It is worth mentioning that WhatsApp doesn’t show a blue dot for muted status updates.

NOTE: There is no way to turn off or get rid of blue dots, neither on iOS nor Android.

We hope you found this article helpful.