How to Force Install Android 4.3 OTA update on Galaxy Nexus

We’ve covered several How-To guides with step-by-step instructions to convert your Non-Yakju Galaxy Nexus to Yakju or Takju firmware, so as to get the latest software updates directly from Google, instead of Samsung who delays the OTA updates for Non-yakju devices (yakjuxw, yakjuux, yakjusc, yakjuzs, yakjudv, yakjukr and yakjujp) by several weeks. Refer post: Check if your Galaxy Nexus is updated by Google or Samsung?

If you’ve earlier changed your Galaxy Nexus from Non-Yakju to Yakju/Takju using one of our guides but still haven’t received the latest Android 4.2.2 OTA update yet, then here is an easy workaround to get the 4.2.2 update without going through any sort of technical stuff. The method involves forcing your Galaxy Nexus to check for the latest software update, provided the update is being officially rolled out by Google. This trick is not limited to 4.2.2 and thus should work with earlier or future updates as well.

3. Tap on Clear data and select Ok to confirm, then tap on Force Stop and hit Ok.

4. Now reboot your phone. A system update should then appear while your device is connected to the Internet. Or check for the update manually from (Settings > About phone > System updates > Check now). Note: The update might not appear on the first attempt, so keep trying at frequent intervals. 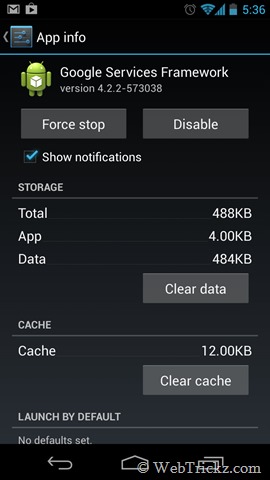 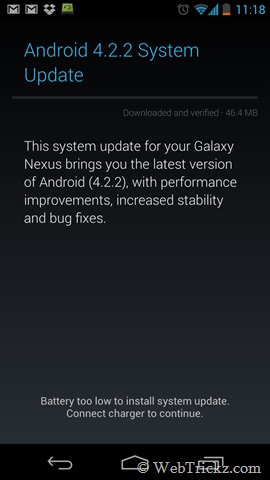 ~ The above trick apparently works for most users but isn’t 100% foolproof. We tried it on our Galaxy Nexus after multiple failed attempts to get the update via the standard way and luckily it worked like a charm on the first attempt. 🙂