LeEco Le 2 Review: A solid all round performer with some unique offerings

LeEco (pronounced La-eco) did a big bash for the Indian launch of their 2016 top-of-the-line and budget offering, Le Max 2 and Le 2 respectively. While the Le Max 2 will have lesser buyers as compared to the masses that will hunt for Le 2, the competition is not less for the Le 2 itself. The pricing too is pitched right there with Xiaomi’s Redmi Note 3’s 32GB variant at Rs. 11,999. We went on to use the Le 2 for over two weeks now in various conditions and here are our findings with the phone. 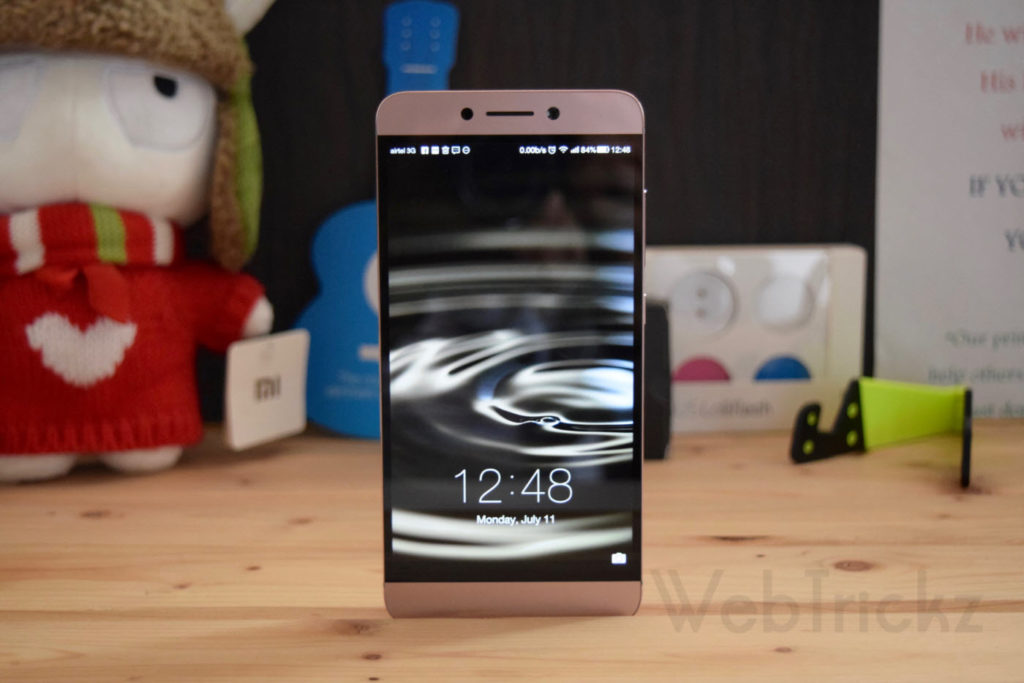 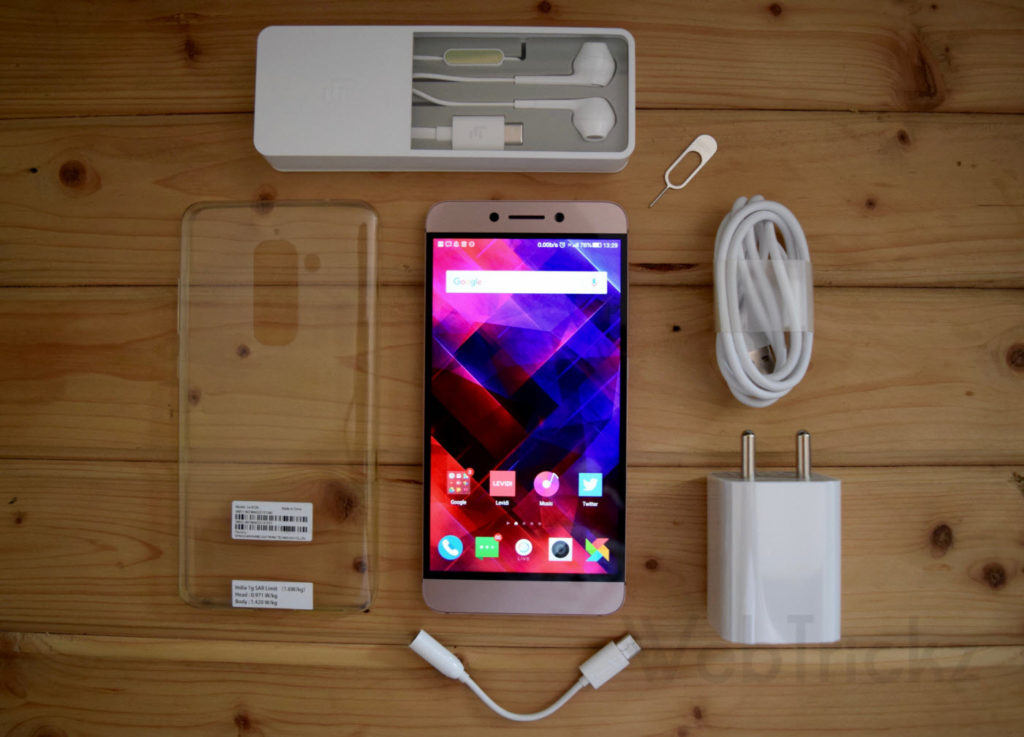 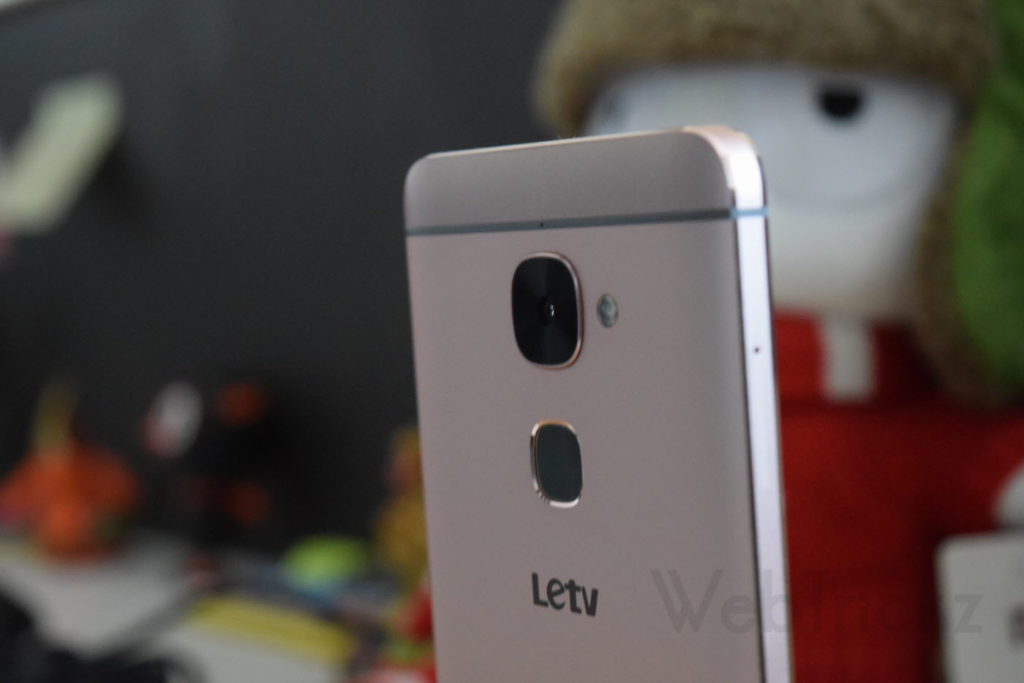 Le 2 is an all-metal unibody phone and the one we have is the rose gold variant. It also comes in silver-ish gray color. Here, there is nothing fancy but the plain old boxy design with curved corners that is typical of any Chinese phone you will get to see out there. But at that price, there is nothing much to complain about as it’s a solid metal build with chamfered edges. Power and volume rockers are on one side and a Dual SIM tray on the other, the top has an IR blaster while the bottom has the duo of mono speaker and microphone with symmetrical design language. Also present is the USB Type-C port that will be used for charging the phone as well as plugging in earphones.

On the front is a 5.5″ FHD display that has decent viewing angles but is highly reflective. There are a few display modes you can use but still, this cannot beat the Redmi Note 3’s sunlight display. The touch sensitivity of the phone is also good and we have no complaints on that front. The back of the phone is quite slippery just like the back of the Redmi Note 3. The camera bump does poke your hand as it has sharp edges and we feel it is not well finished. There is also a rounded edges square fingerprint scanner, and it shines like a mirror similar to the one we saw on the Le 1s.

Overall, for the price you pay you are getting the best in the class build and a pretty common design that has nothing wrong with it. 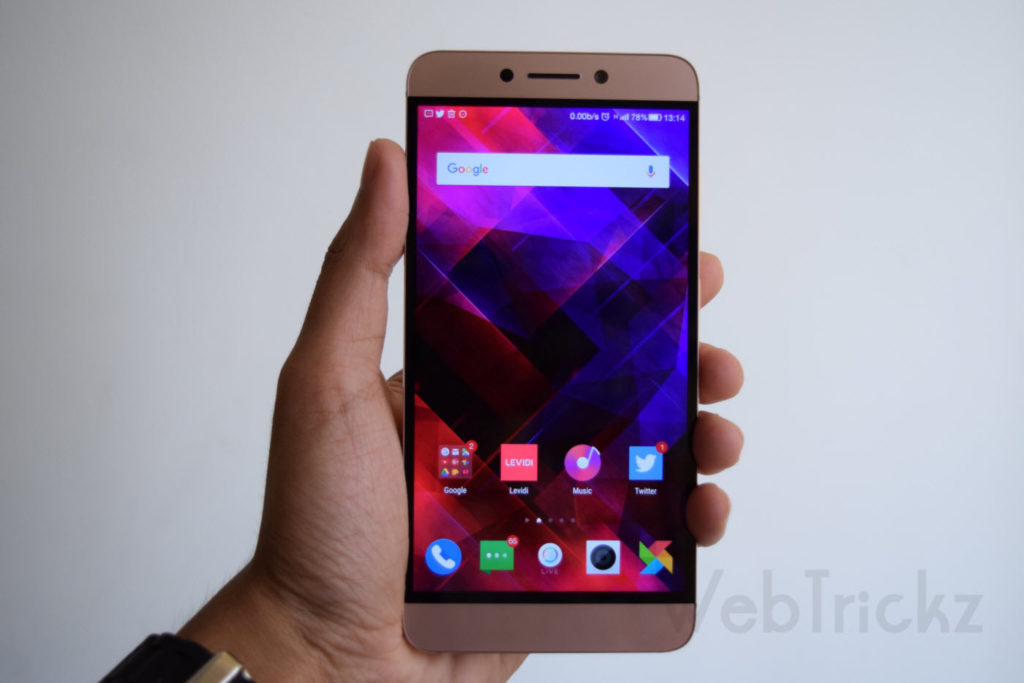 With a 5.5″ FHD screen, one would want to use it for multimedia and gaming. Though it doesn’t match up to flagship displays it doesn’t disappoint you either. Colors are more natural and pleasing to the eyes. The phone does have a considerable amount of bezel and has a thick black border around the frame. This is irritating to some but after a while, you will stop noticing it. As indicated before, the display is highly reflective and reading gets hard to even at the highest brightness under direct sunlight. There are some contrast modes in settings but still, we miss something like the sunlight display on the Redmi Note 3.

There are 3 capacitive buttons that light up when touched and they are well lit as well when compared to the very dim ones to be found on the Redmi Note 3. They are also bigger in size but it’s impossible to spot them when they aren’t lit. The buttons are not customizable and there is no option to turn them off and have on-screen buttons. 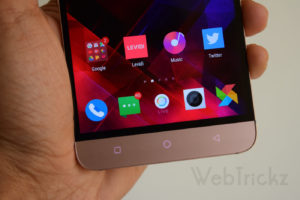 There have been reports and complaints about the display making some noise when pressed in some areas. We did try it out and yes it creaks when the middle portion of the screen is pressed hard but we believe no one will press it that hard as it is never needed. In a day to day usage, there was no touch issue found. 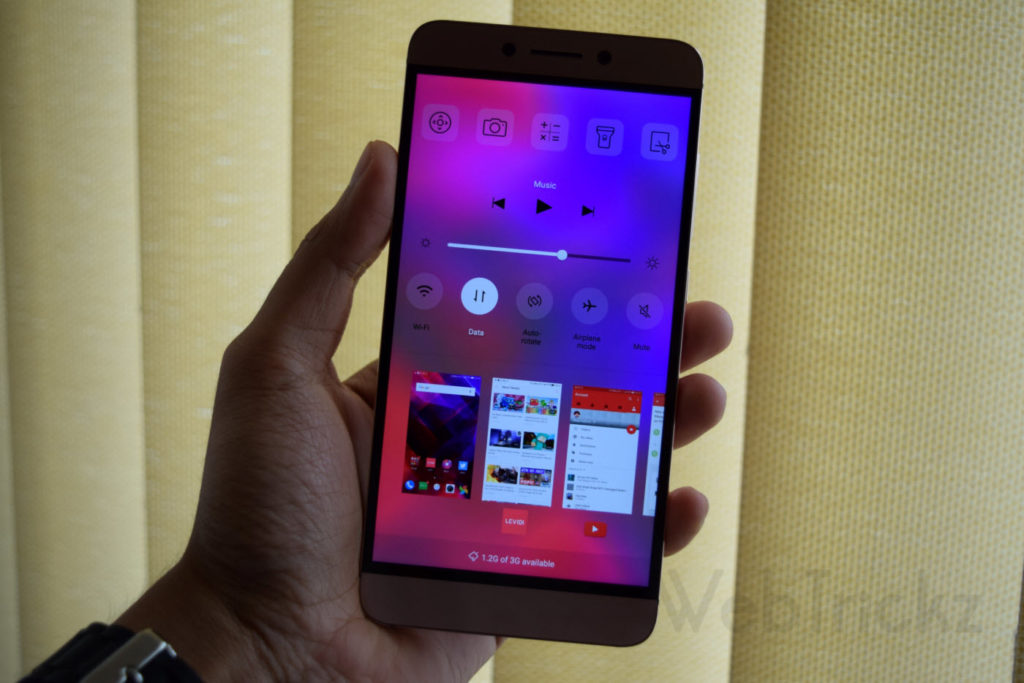 EUI 5.6 is what is found on the Le2 and is built off Android Marshmallow. The latest update to the 5.8 version has also arrived that brings in a native Fingerprint lock for Apps and various fixes. This is a heavily customized version of Android that resembles iOS all around the place. Similar to many Chinese phones you won’t find an app drawer here. There is no toggle menu available on swipe down but a mix of options with audio player and task manager available via the recent apps button. Overall the OS is very smooth, thanks to the Snapdragon 652 processor and 3GB of RAM. At any point, if you clear all the apps, 1.6GB of free RAM is available. Out of 32GB storage, 29.1GB of space is available for the user.

Following are the key features of the software inside EUI:

The overall performance of the phone was good and satisfactory. To make it easy for you, let’s divide the results across various aspects about the phone’s usage and how it performed:

Le 2 has a 3000mAh battery and we are coming to this phone after being used to phones with bigger batteries such as Redmi Note 3, Zenfone Max that have long battery life. But nothing to worry about here as the Le 2 delivered a good and satisfactory battery life.

On the basis of the above tests, we strongly believe that most of the users should be able to get a day’s worth of battery life out of this phone. There are some power-saving options such as Ultra-long standby during sleep and Battery assistant to extend the battery life. Le 2 also supports Quick charging and takes around 90 minutes to fully charge. The phone and charger also get a little hot but that’s just normal. 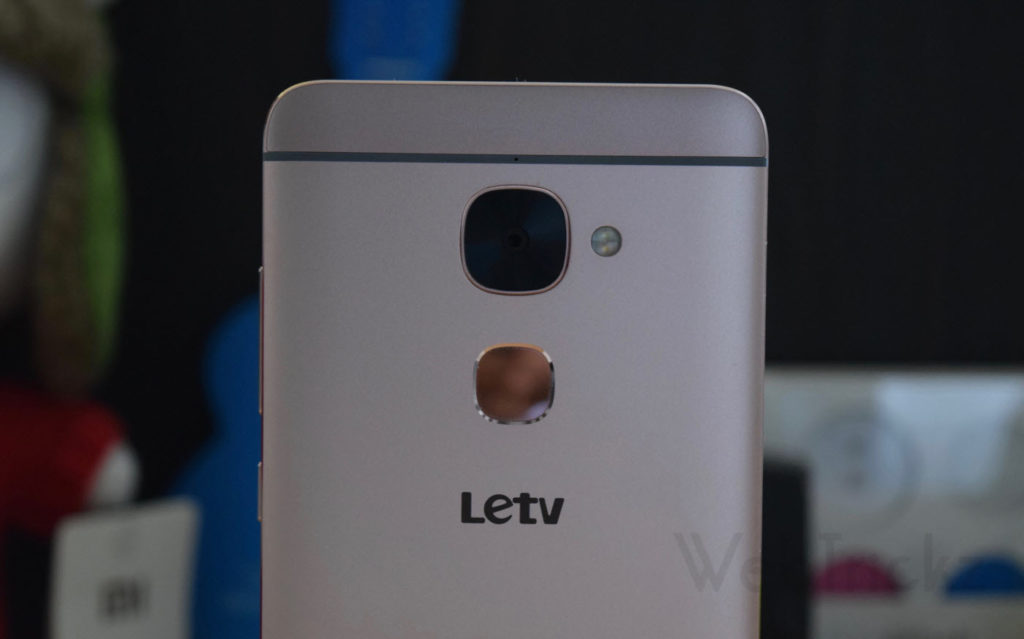 The front camera is a 16MP lens with f/2.0 aperture, PDAF, and dual led flash. The camera app is a typical EUI one with standard options and shooting modes. Easy to use and the overall image processing is very fast. To make it easy for you we have divided the camera performance into various aspects: 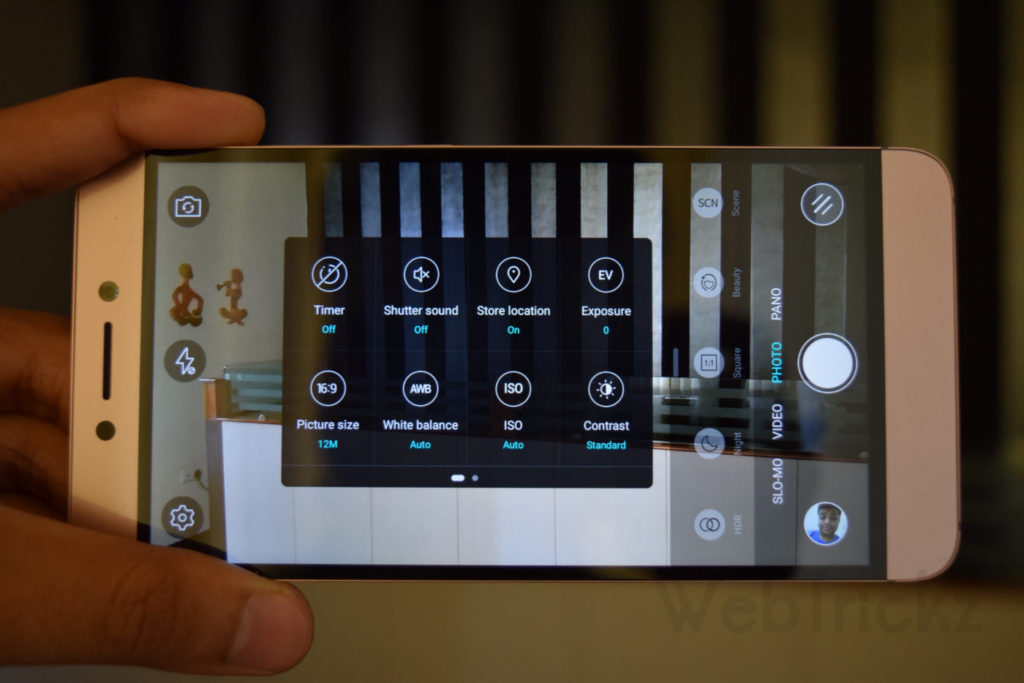 The Le 2 packs a punch when it comes to the specifications and build quality. It is also a very good all-around performer. When compared to the other phones in the segment, the camera performance with the exception of Moto G4 Plus is better in many departments. The LeEco ecosystem offering a free 1-year subscription is a real deal that will attract many and this feature really stands out. At 11,999 INR, Le 2 is a very good choice and as long as you are not too much behind crazy duration of battery life like Redmi Note 3 and Zenfone Max. Considering LeEco flash sales are better than others, it is a very good choice and you will get more for the money you pay. We highly recommend the Le 2 but it does not come without shortcomings. There is no expandable memory, no 3.5mm audio jack and you’re stuck with a single port for charging as well as earphones. The display under sunlight is rather tricky at times but all of these issues can be lived with and they are not show stoppers. The phone does have LED notification, USB OTG support and the IR blaster too is a nice addition.

Do share your feedback in the comments section below!