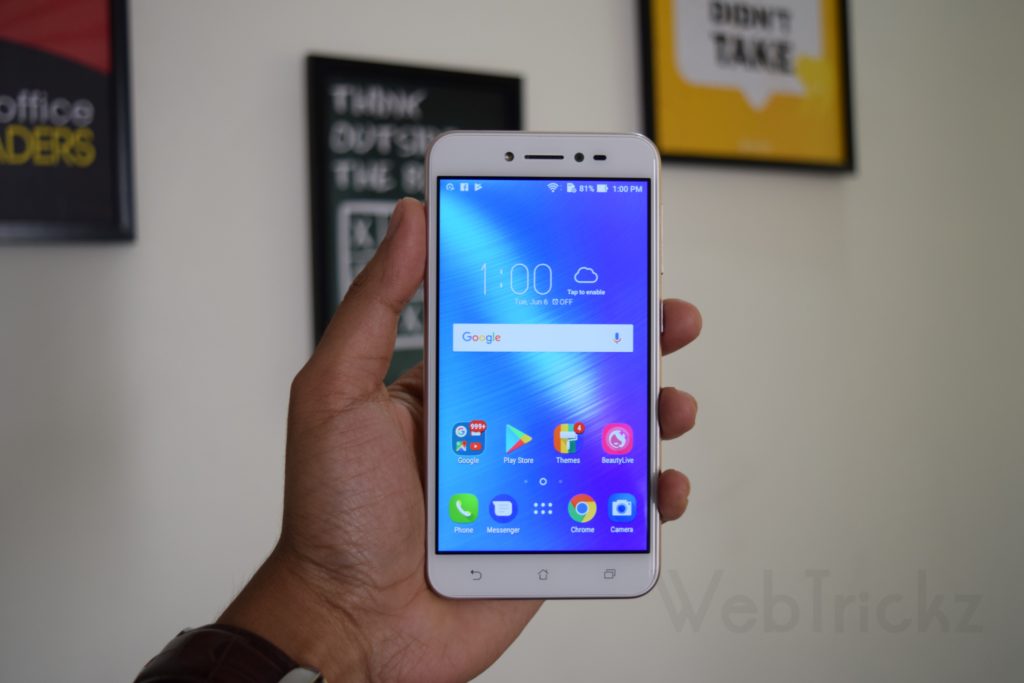 ASUS, the Taiwanese company is known for introducing a varied range of smartphones that serve a certain unique purpose, making them different from the crowd. The brand has some interesting offerings in the form of Zenfone Laser, Zenfone Ultra, Zenfone Max, and such, all of which focus on different aspects ranging from a faster focusing camera, multimedia consumption to elongated battery life. Recently, Asus launched the “Zenfone Live” in a budget segment that offers real-time beautification in live videos. A BeautyLive app comes integrated that beautifies the facial tone by removing blemishes and smoothing skin when you’re live on social channels. While the likes of Oppo, Vivo, and Gionee are busy marketing their selfie-focused phones with powerful front cameras, Asus is trying to set itself apart with Zenfone Live. Coming with low-end hardware and having just one unique feature up its sleeve, is the Zenfone Live worth your consideration in practical life? Let’s find out in our review! 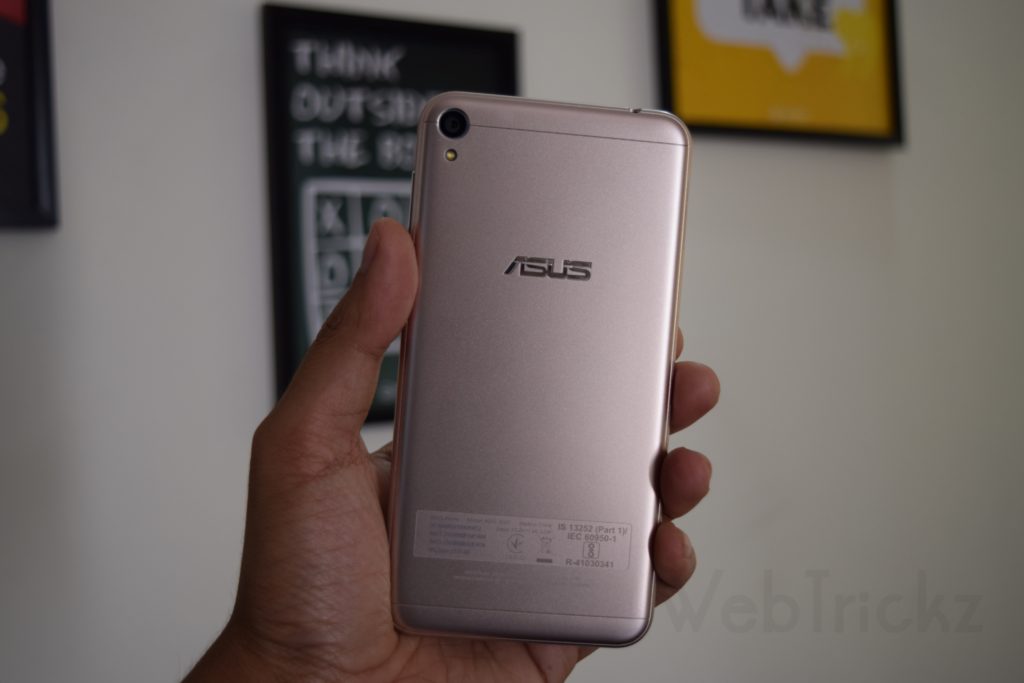 The Zenfone Live carries the same design as seen on Zenfone 3 base model. When placed alongside my Zenfone 3, the Zenfone Live looks like a younger twin because of its compact form factor. Though the design language looks the same from the front, there is a major difference in the overall design and build quality of the two. The Zenfone 3 is sort of a mid-range flagship whereas Live belongs to the affordable category. Made out of plastic with a metallic finish, the phone may appear premium for a certain distance but that holds untrue once you actually hold it. The Live doesn’t feel premium to hold and its lightweight body weighing just 120 grams remains one of the key reasons, besides the use of plastic.

The front looks relatively good with a 2.5D curved glass though. There are rounded corners and sides that make for a comfortable grip. On the front, a notification light, front selfie flash, earpiece, camera, and usual sensors sit at the top whereas, there are three non-backlit capacitive buttons at the bottom. The power key and volume rocker are on the right side, both of which have a nice textured finish. The left side houses the Hybrid SIM slot that supports either two nano SIMs or a nano-SIM and microSD card. It’s disappointing to see the lack of a dedicated expansion slot considering the device offers just 16GB of onboard storage. The 3.5mm audio jack is on the top, followed by the speaker grille and micro-USB port at the bottom.

Moving to the back, the main camera with a single LED flash is located at the top left and a neat Asus logo flaunts in the middle. Sadly, there is no Fingerprint sensor which is a big letdown. Despite having an 8mm thick profile and a 75% screen-to-body ratio, Zenfone Live’s overall feel and design failed to impress us. We feel Asus should’ve added more mass to it to avoid that subtle feeling of holding a toy phone. Comes in Navy Black, Rose Pink, and Shimmer Gold.

Being a handy phone, the Zenfone Live sports a 5-inch HD IPS display with a 2.5D curved glass on top. The HD display with a screen resolution of 1280×720 pixels has a pixel density of 294ppi. We aren’t complaining but this is another area where Asus could’ve made things appealing by offering a Full HD display. The display is bright enough, looks fairly sharp, and offers a good colour reproduction. The viewing angles are good and visibility under direct sunlight is not an issue. Asus includes a “Screen color mode” in settings that lets you manually adjust the colour tone to a warmer or cooler one. Those fond of AMOLED displays can switch to the vivid mode to get punchy colours. 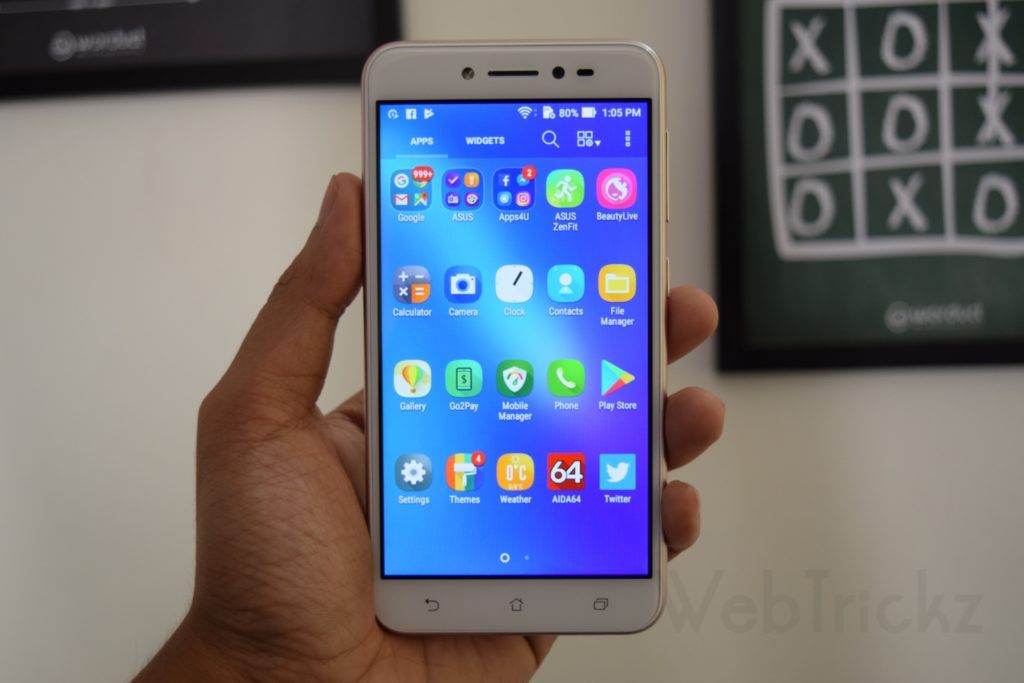 The Zenfone Live runs on Android 6.0.1 based on ZenUI with the April security patch. It’s disappointing that the phone doesn’t come with Nougat when Asus’ Zenfone 3S Max itself launched back in February came with Nougat out of the box. As usual, the ZenUI 3.0 is a heavily customised skin loaded with the standard set of Asus apps. The shortcuts for stock apps such as Splendid, System update, and Audio Wizard have been removed from the app drawer. A lot of bloatware still exists with apps such as Do it later, ZenCircle, ZenTalk, Go2Pay, Service Center, and likes. Moreover, there are 3rd party apps like Facebook, Messenger, Instagram that come pre-installed. Sadly, there is no option to uninstall most of these apps but you can disable them.

Freshly installed apps on Zenfone Live include the BeautyLive and ZenFit app. ZenUI offers a host of other features and personalization options such as One-hand mode, Bluelight filter, ability to Lock and Hide Apps, Themes, Icon Packs, customizable quick settings, UI modes such as Easy mode and Kids mode. ZenMotion offers handy gesture controls such as double-tap or swipe up to wake the screen and finger gestures to open certain apps. The stock gallery is rich in editing options that eliminate the need to use any other app.

Overall, the ZenUI is feature-rich and well optimised but the numerous unwanted apps are annoying and certain UI elements like Quick Settings look outdated. 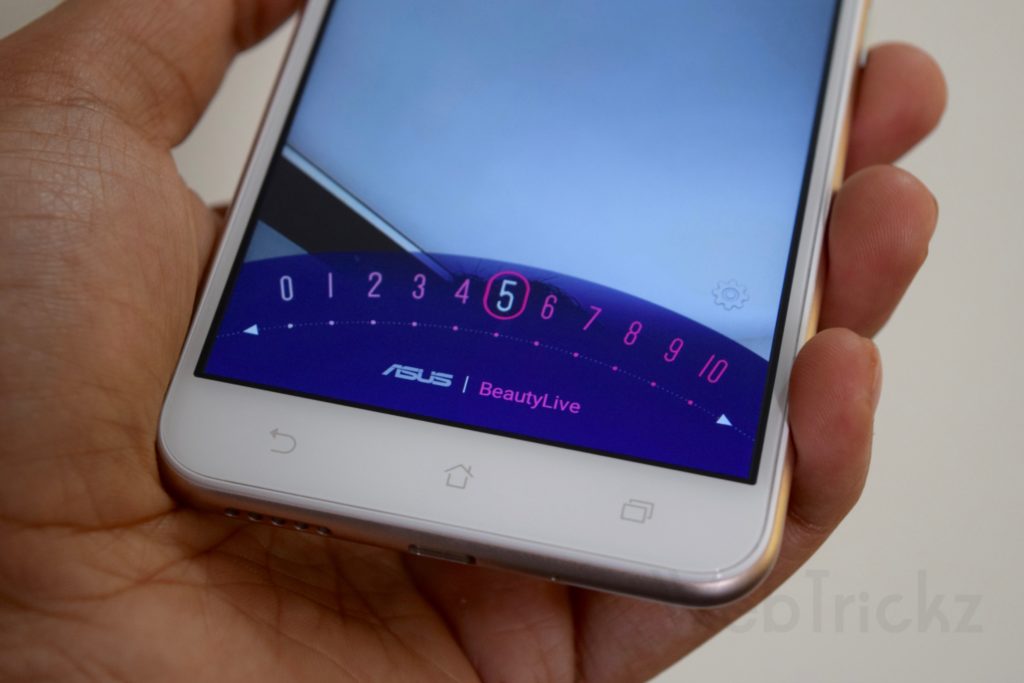 Coming to the key highlight or say the USP of Zenfone Live, the “BeautyLive” app. The app brightens up and digitally beautifies the face by applying smooth facial effects in real-time when you live stream videos. The supported platforms include Facebook, YouTube, and Instagram. The phone comes with a 5MP front camera with an 82-degree wide-angle lens and is accompanied by a soft LED flash on the front. The app shows a slider that lets you set the intensity of skin brightening from o to 10. Once you go live on any desired platform, a BeautyLive floating button is shown using which you can adjust the beautification level during live streams. One can also enable the front flash in dark lighting conditions. The feature is supported on both the front and rear cameras.

Talking of the performance, during our test we went live on YouTube and the real-time beautification feature worked as advertised by Asus. The skin tone tends to look brighter and smoother as we moved the slider to a higher value. In indoors and low-light conditions, the front flash helped further and its lighting was acceptable. However, the image quality exhibit high noise even in bright outdoors and images looked washed out. That said, the need for a better front camera is clearly evident.

It’s downright disappointing to see that the Zenfone Live is powered by a Quad-core Snapdragon 400 processor clocked at 1.2GHz with Adreno 305 GPU. It’s a very old chipset that was initially used in the first generation Moto G, launched back in 2014. This is coupled with 2GB of RAM and 16GB of storage that is expandable up to 128GB. Out of 16GB, there is 10GB of free space available for usage. The use of a dated processor is clearly reflected in the performance of the phone. As a result, apps and games took way longer than usual to load even when few apps were running in the background. The operation is fairly smooth during casual usage but the device doesn’t get along without the occasional lags.

As we expected, the game performance is average and it’s clearly not a device meant for heavy gaming. The phone is capable of running low graphic games like Subway Surfer, Candy Crush, and Super Mario Run but struggles beyond that. We noticed frequent frame drops and slowdowns while playing intensive graphic titles like Dead Trigger 2 and Asphalt 8, followed by quick battery drain. There were no heating issues though.

Connectivity options include 4G Dual SIM with VoLTE, Wi-Fi 802.11 b/g/n, Bluetooth 4.0, GPS, and USB OTG. The device has a 5-magnet speaker with smart amplifier technology and dual MEMS microphones. The sound is clear, loud enough and the audio quality is good too. Surprisingly, there is no distortion in audio even at the highest volume level.

Overall, the performance is average and we feel Asus should have rather opted for Snapdragon 430 which is a better mid-range SoC, recently seen on YU’s Black.

The Zenfone Live packs a 13MP rear camera with f/2.0 aperture and LED flash. The camera app offers considerably fewer modes than what we usually see on most Asus phones which itself states that you can’t push the camera beyond the boundaries. Some of the camera modes include HDR Pro, Beautification, Super Resolution, Low Light, and Timelapse.

In daylight and outdoors, the images captured had an adequate amount of details and decent colour accuracy. Indoor shots taken in well-lit conditions look equally good but possessed noise that can be clearly noticed on the slightest zoom. However, the phone often struggles in locking the focus especially while clicking macro shots, and even tap to focus barely works at that moment. In low-light, the photos tend to appear pretty grainy but were still acceptable.

Coming to the front camera, it’s a 5MP shooter with f/2.2, autofocus, and LED flash. The beautification mode remains the default mode which is something forced upon. The selfies taken in outdoors and bright indoors came out reasonably good considering the low-resolution sensor but little to high noise prevailed depending on the lighting. The beauty mode does a decent job but at times the effect is aggressive, making the selfies look totally artificial and washed out. The front flash isn’t too harsh on the eyes and does help in taking clear and bright selfies in low-light and dark areas. Check the below camera samples.

Overall, the camera does a satisfactory job with respect to its price.

A 2650mAh non-removable battery keeps the Zenfone Live alive. The inclusion of a 5″ HD display and low-end chipset helps in improving the battery life. Under low to moderate usage patterns, the phone tends to last an entire day when charged fully. In one test involving low usage, we got a screen-on time of 2.5 hours with 50 percent juice still left. There is no fast charging support and it takes around 2 hours to charge from 0 to 100% using the provided 1A charger. Asus offers several power-saving modes that one can use to extend the battery life. Overall, the battery backup is decent but not great.

Priced at Rs. 9,999, the Zenfone Live is very tough to recommend in the first place. Asus touts real-time beautification as the key aspect and we appreciate this unique feature but that itself doesn’t meet our expectations. The hardware of the phone, especially the dated processor makes the entire package unattractive and there is no fingerprint sensor onboard. Moreover, the camera package that powers the BeautyLive app is just average which shouldn’t be the case when the emphasis is on a specific feature. That said, we feel there is nothing really exciting about Zenfone Live. At a similar price, there are better options available such as Redmi 4, Lenovo K6 Power, and Redmi Note 4 which offer much better value for money.