The title of world’s slimmest smartphone was upheld by Gionee’s “Elife S5.5” earlier last year that was later broken by the company itself, when Gionee introduced “Elife S5.1” measuring 5.1mm in thickness, a significantly slimmer smartphone than the Elife S5.5. A while afterwards, Oppo unveiled R5 that’s just 4.85mm thick whose record was recently overtaken by Vivo X5 Max that’s currently the slimmest smartphone in the world with just 4.75mm in thickness. Well, a difference of few millimetres don’t really impact the overall form-factor and slimmer profile of smartphones and that’s the reason why Gionee Elife S5.1 still stays intact in the race of one of the world’s slimmest smartphone. Elife S5.1 is termed as sexiest smartphone for a reason, the 5.1mm thin charmer is indeed super sexy, ultra-slim and extremely lightweight at just 97 grams. We’ve been using the S5.1 for around a month and it’s now time to share our detailed review. 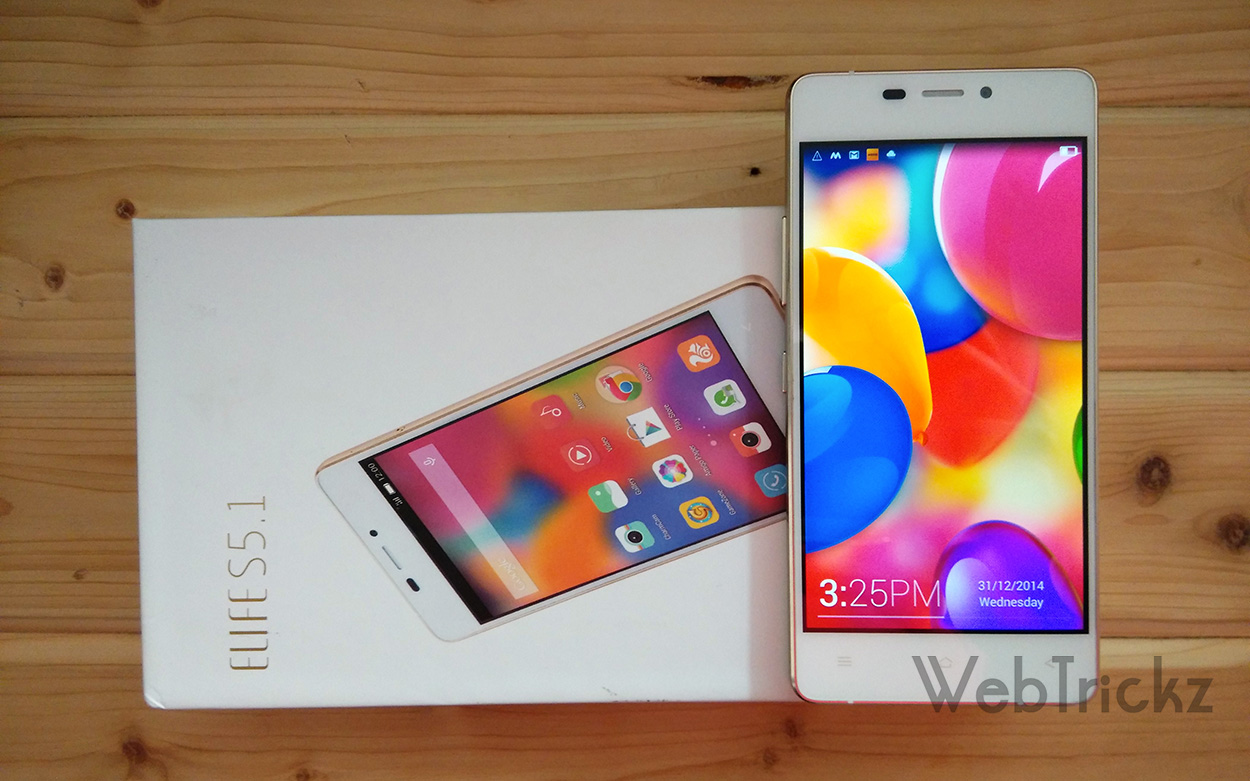 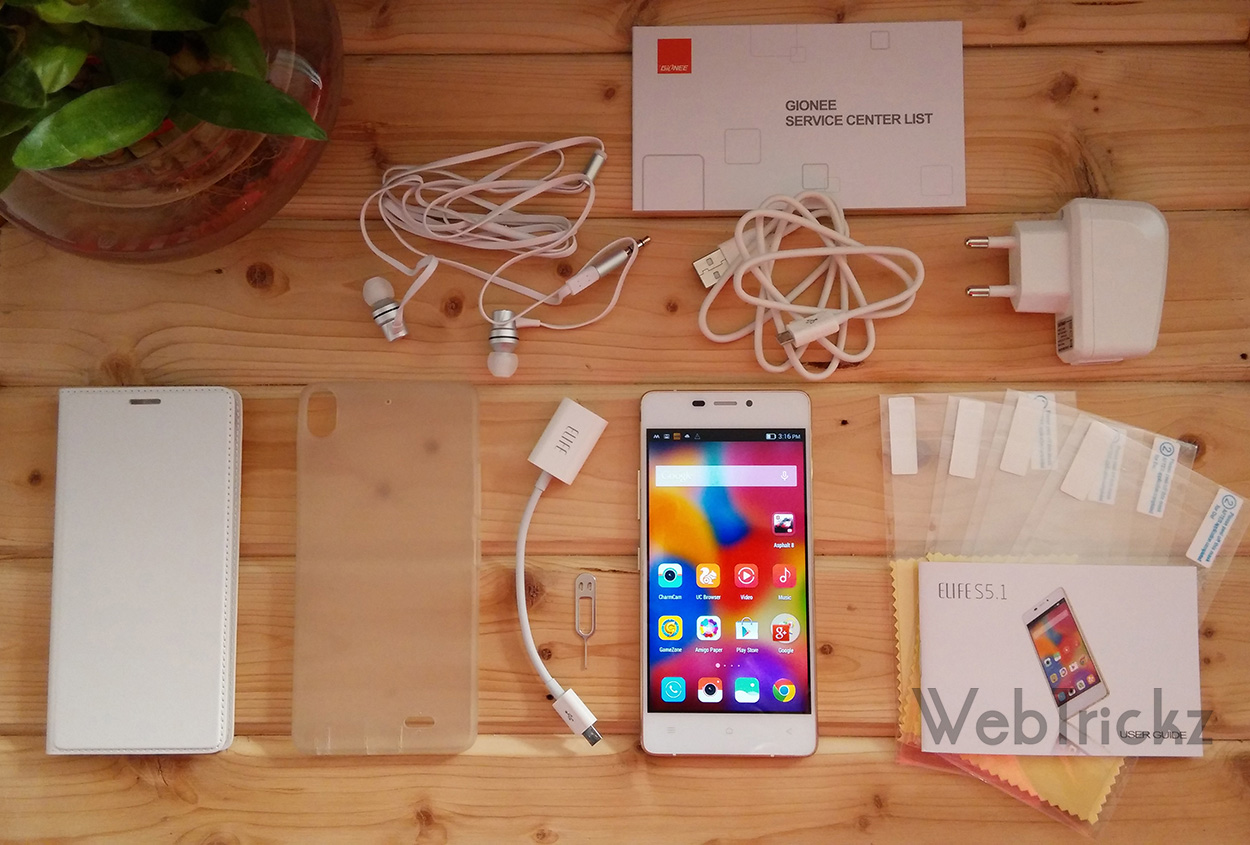 Unlike the super-slim S5.1, its box isn’t so slim because it packs a lot more goodies than what we usually see from other mobile brands. Inside the box, you’ll find a free flip cover in white color that holds the Elife S5.1 securely. The premium looking flip case is made of faux-leather with real stitching on the edges and it makes use of quality adhesive to hold the phone. It comes with a USB travel charger, a micro USB cable and good looking in-ear headphones that feature a flat tangle-free cable and metallic casing in silver. There is a transparent soft rubber (TPU) case included with cover flaps for micro USB and 3.5mm audio jack. Moreover, you get a OTG cable, a SIM-ejector tool, 4 screen guards (2×2 each for front and back), a user guide, warranty card, and a book listing Gionee service centers in India. Great, isn’t it?

Gionee Elife S5.1 Photo Gallery – (Click on the images to view them in full size.)

The Elife S5.1 is designed to impress at first sight! The 5.1mm thickness is surely the highlight of this phone but once you hold it, you’ll be surprised to know how lightweight and slim it really feels in hand. The S5.1 is enclosed in a complete metal frame and is constructed throughout using metal and glass that gives it a premium look. The device is extremely thin at 5.1mm and lightweight at 97g, despite having a 4.8” display. The sides are made of metal with brushed metal finish and have chamfered edges at both the ends of the phone that looks classy. The rounded corners look good and the presence of iPhone 6 like white color bands on sides looks aesthetically pleasing. Both the front and back of the phone are covered with Corning Gorilla Glass 3 protection. The ultra-slim profile and inclusion of glass at back makes the device pretty slippery such that it can easily slip off at times if you aren’t cautious. 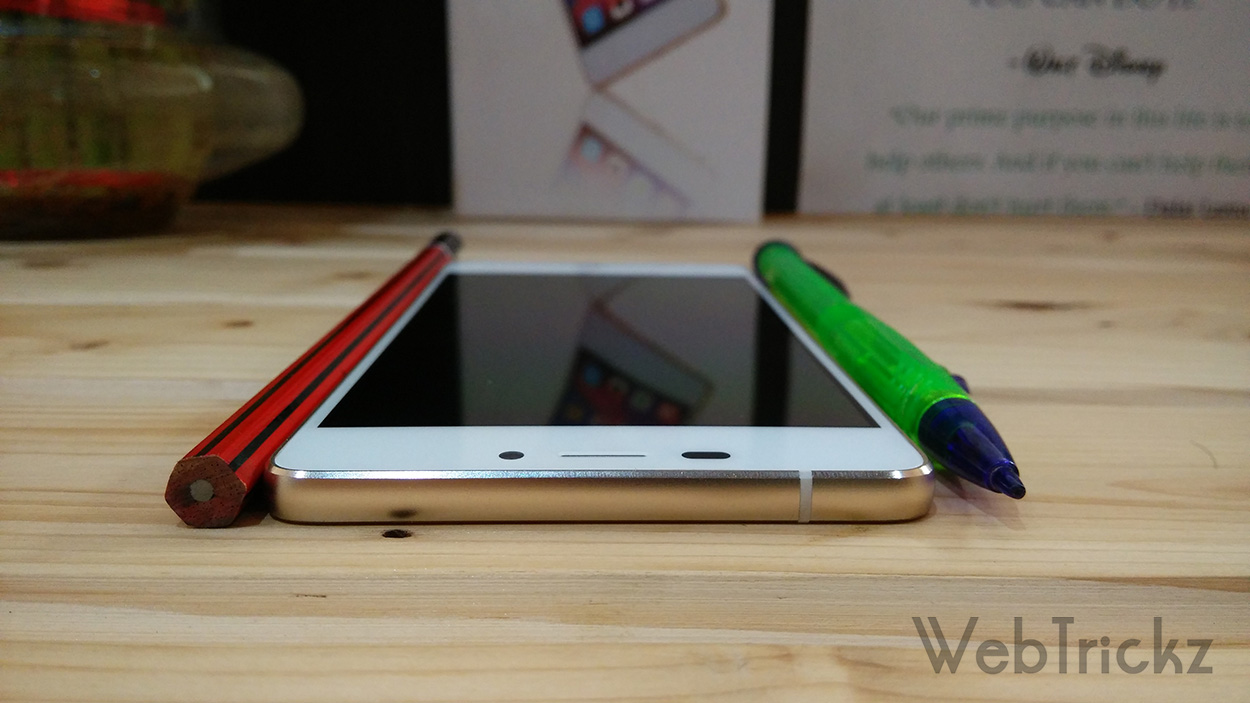 In spite of being just 5.1mm thick across, the Elife S5.1 fortunately doesn’t disappoints with a protruding camera as seen in iPhone 6 and other flagship smartphones. The phone features 1.8mm thin bezels that enhances its overall beauty and the display has a black border. On the front top are equipped proximity and ambient light sensors, earpiece and front camera. Sadly, there is no LED notification light which is pretty disappointing. On the bottom are 3 capacitive buttons with backlight. The power key and volume rocker is awkwardly placed on the left side that offers a nice tactile feedback but their opposite location could be annoying for some users (specially while using the flip case). The secondary noise-cancelling microphone is located at the rear top while the micro USB port, primary mic and 3.5mm jack is placed at the bottom. 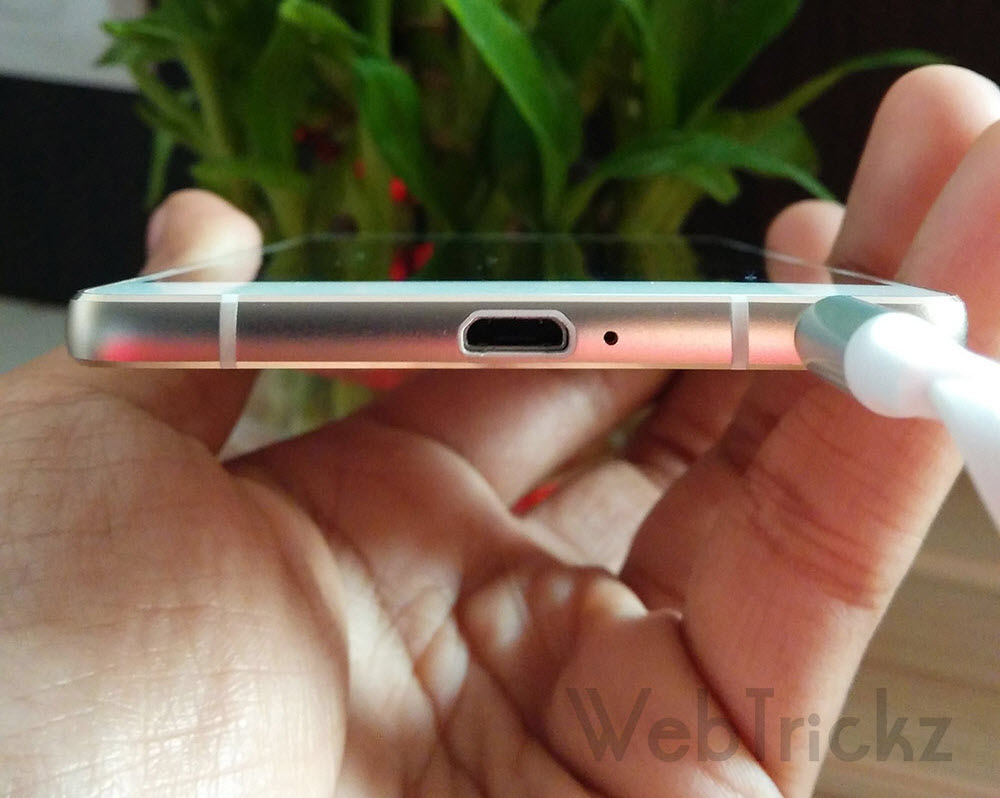 One should not judge Elife S5.1 strength by its slim form-factor. The device is in fact strong and is designed to last. For instance, we accidentally dropped the S5.1 from shoulder height on solid floor while on a call and surprisingly the phone landed safe without any scuffs. The quality hardware served by S5.1 in a 5.15mm chassis is of course applauding. It is comfortable to hold and one-handed operation is easier.

Gionee Elife S5.1 is an impressive phone flaunting a premium look and sexy appeal. The golden and white color looks beautiful and elegant from every angle that surely grabs people’s attention. 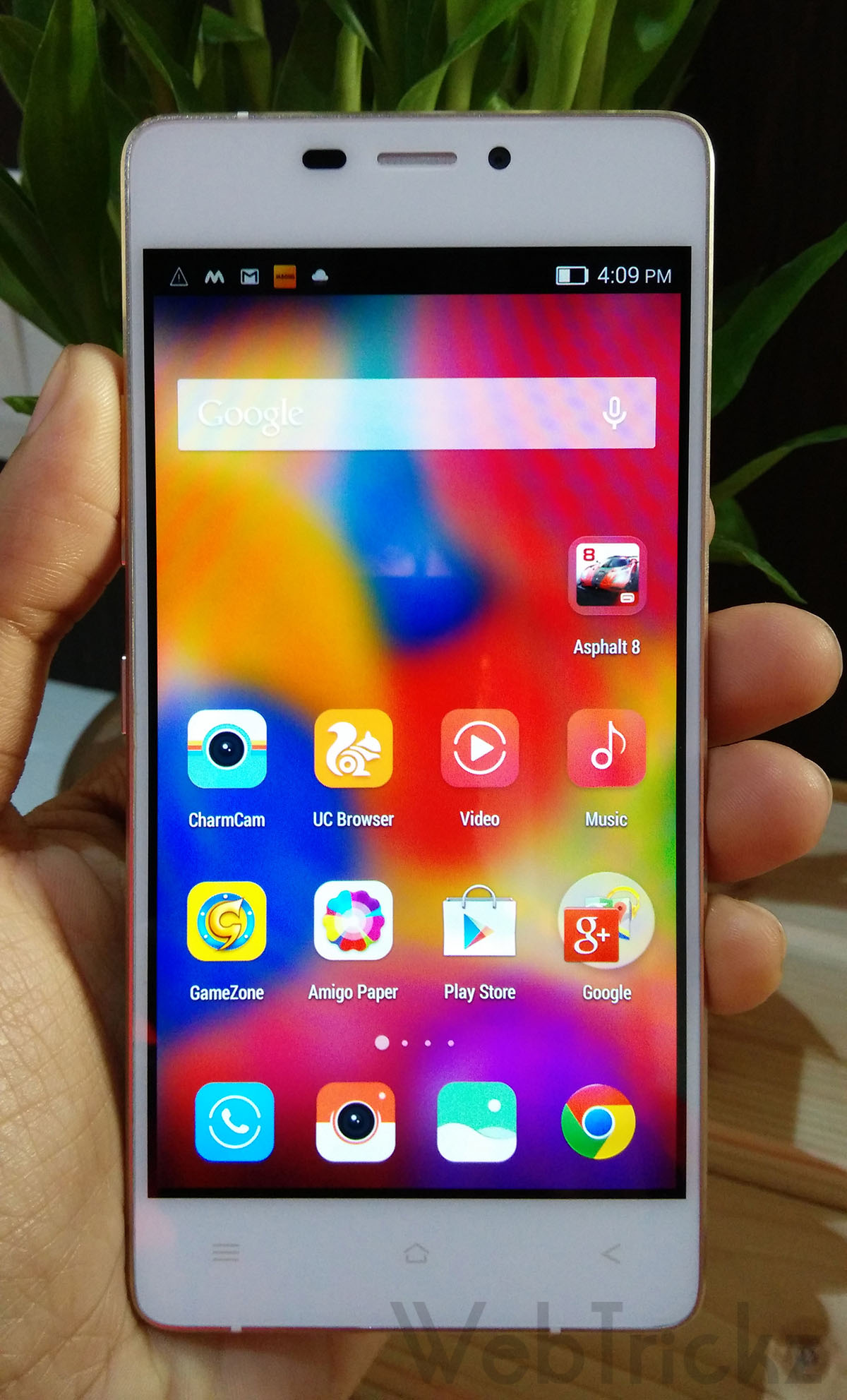 The Elife S5.1 sports a 4.8-inch Super AMOLED HD display with a screen resolution of 1280 x 720 pixels and pixel density of 306ppi. The display is protected by Corning Gorilla Glass 3 and has a black border around it. The display looks sharp, vivid, with deep blacks; thanks to its AMOLED display. The color saturation level however seems pretty high in my opinion or that’s appears because we’re used to IPS LCD display nowadays. The viewing angles are great and visibility is decent in direct sunlight. There are 3 capacitive touch buttons with backlight. In brightness settings, there is an ACL screen saving function that adjusts the brightness automatically according to the screen display to save power. Overall, the display of S5.1 offers a bright picture quality and looks great. 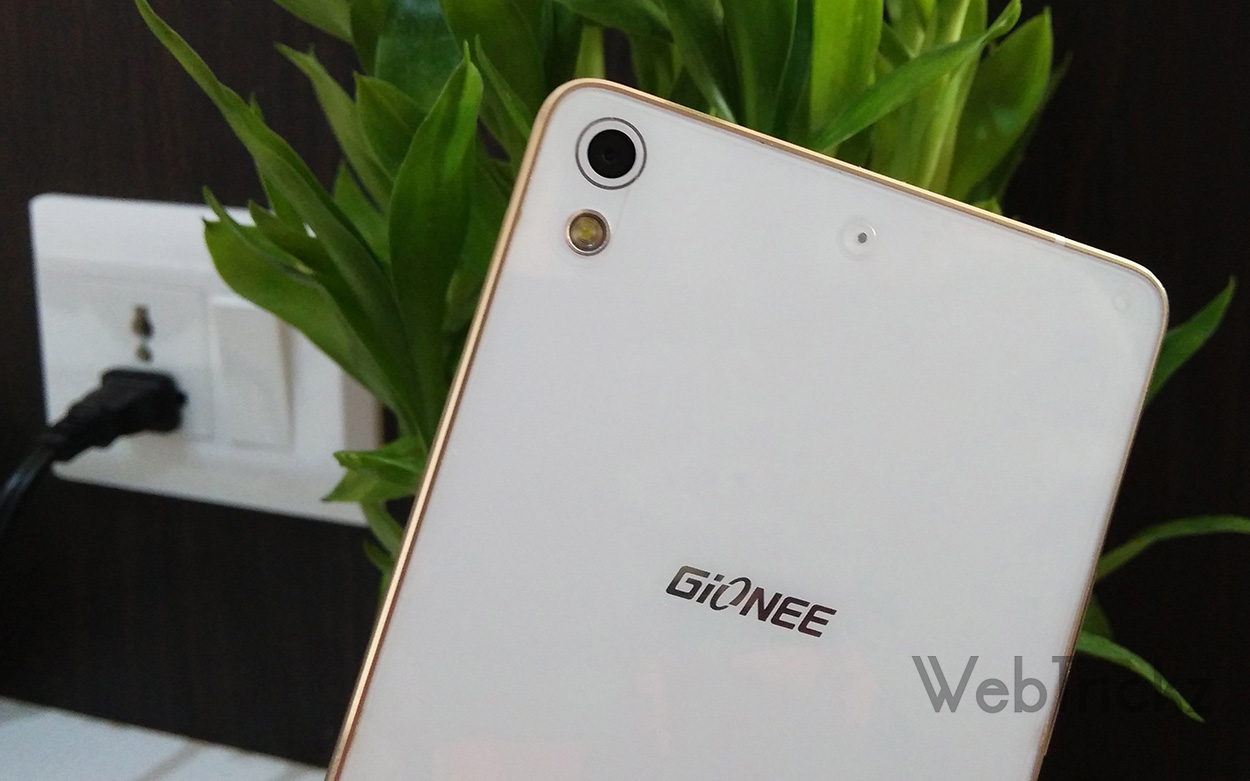 The phone packs a 8MP rear camera with LED flash and a 5MP front-facing camera. Camera features include: Panorama, HDR, Auto scene, Face detection, Geo-tagging, Touch focus, Burst mode, Gesture Shot, and Smile Shot. There are options to change capture mode, set self-timer, picture size, anti-banding and use the volume keys to capture or zoom. The camera UI is nice and one can switch to the secondary ‘CharmCam’ camera app from the default camera itself. CharmCam lets you apply various filters like Face beauty, Makeup, Stamps, PPT in real-time first and then capture the shot. The main camera supports Full HD video recording in 1080p @30fps and one can customize settings like White balance, Exposure, etc. 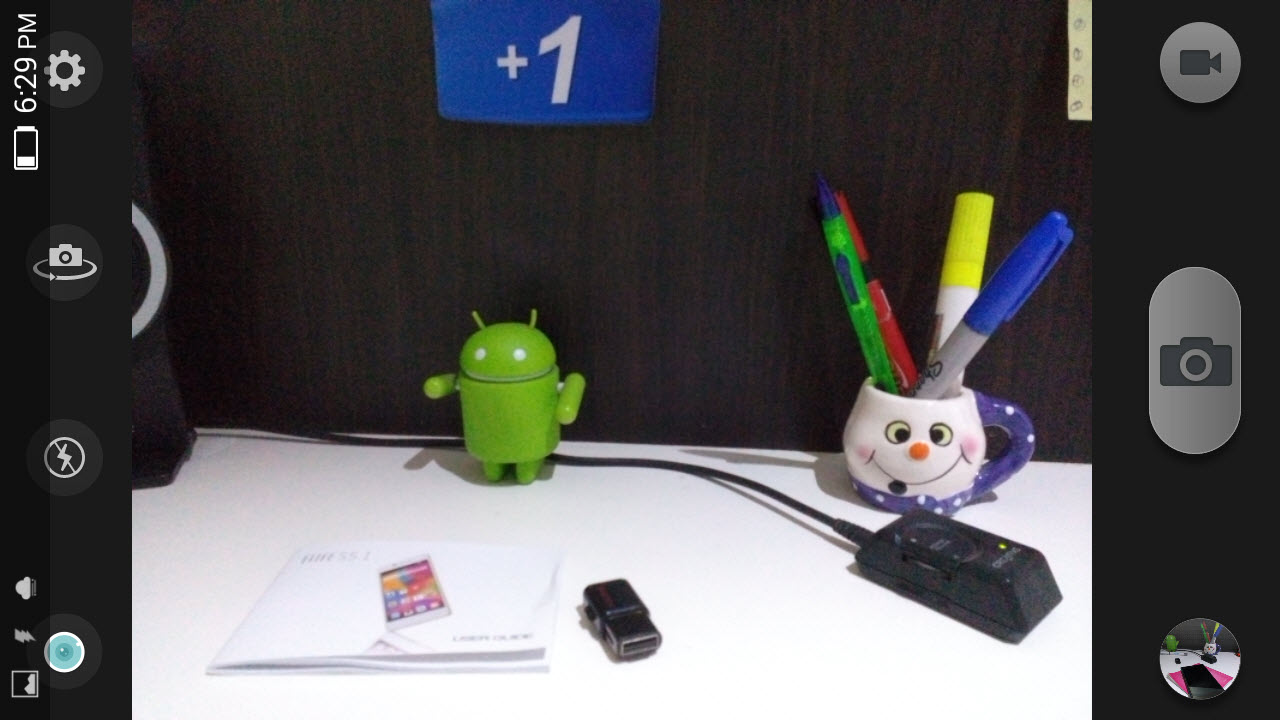 The rear 8MP camera takes good quality photos in daylight conditions and in low-light environment. The photos bear natural colors and the text context in stills appears pretty good and sharp. The low-light shots without flash and night shots with flash came out pretty decent. The video quality is good in low-light with clear and loud stereo audio recording, make sure to check the sample below recorded in 1080p. The 5MP front camera is capable of taking good quality selfies without much noise. It also supports HD video recording in 720p.

Check out the camera samples below to get an idea of Elife S5.1 camera –

Battery – This slim phone packs a 2050mAh non-removable battery. Comes with a 1A wall charger. The battery backup of S5.1 is sort of average and and the phone usually lasts for 8-9 hours (approx) under moderate to heavy usage. To conserve battery life, there is a CPU power saving mode that limits the maximum CPU performance and lowers the device temperature.

Elife S5.1 comes with 16GB of internal storage out of which user available storage is 12.38GB (Free System space is 2.63GB and free phone storage is 9.75GB). There is no option for expandable storage. There is however an option to move several supported apps from system to phone storage. The phone comes with USB OTG Support, so you can use the provided OTG cable or connect a micro USB pen drive to watch media content on the go. A basic file manager app is included, to let users explore the internal or USB storage easily. 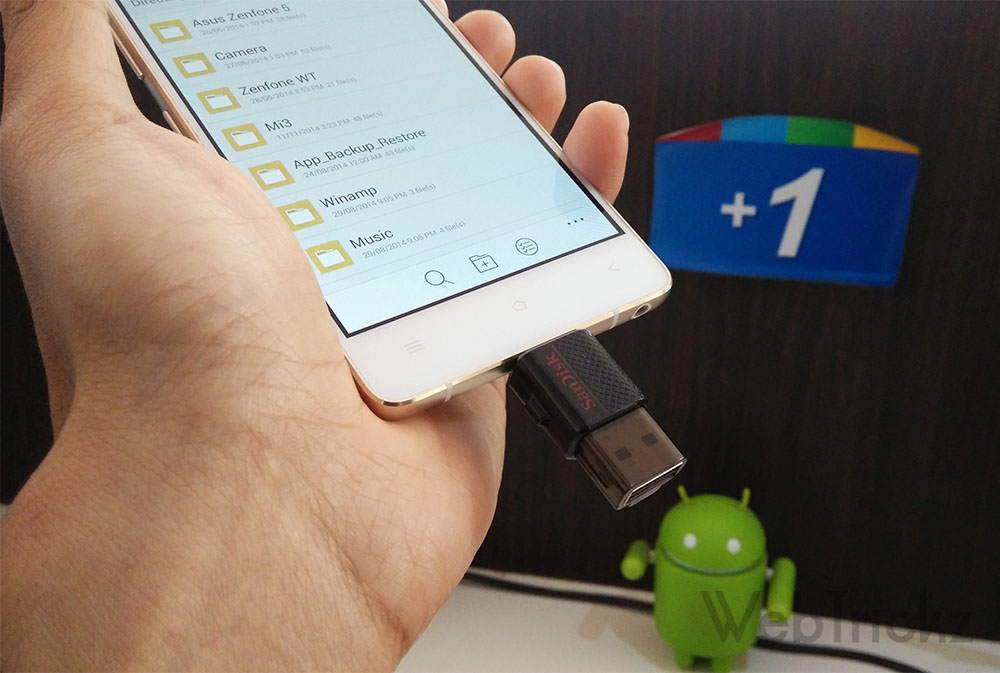 The S5.1 packs a dual-grill loudspeaker at the lower back side that generates loud sound considering the phone slimness. The sound is crisp without any noticeable distortion even at full volume. The default music player features DTS Surround sound that improvises the music quality by adding DTS effects through software. The sound quality of free in-ear headphones in impressive too.

Gionee Elife S5.1 is powered by a 1.7GHz Octa-Core MediaTek (MT6592) processor and ARM Mali 450-MP4 GPU. The phone runs on Android 4.4 KitKat customized with Amigo 2.0 UI. Gionee has loaded it with only 1GB RAM which most users may find disappointing but that isn’t really a concern. The device performance is smooth without any lags and the graphics performance is at par as well. We tried running graphic intensive games like Asphalt 8 and Dead Trigger 2 on S5.1, the gaming performance was pretty smooth and graphics were good. Out of 1GB RAM, around 250MB of RAM is free after a quick reboot. In Benchmark tests, the device knocked a score of 32682 in Antutu and 13825 in Quadrant benchmark.

The phone runs on Android 4.4 KitKat skinned with Amigo 2.0 UI. The Amigo UI is pretty different without any app drawer, so all your apps are located on the homescreen itself just like in iOS and MIUI ROM. The Amigo UI looks nice but isn’t that impressive and lacks some basic UI features like you can’t access recent apps menu while an app is opened up. It comes with customizable Quick settings and compatible apps can be moved to phone storage. The Amigo UI offers ‘Smart gestures’ that has interesting gestures like double-tap to wake, smart answer, quick operating, etc. Other interesting features include the option to set a scheduler for powering phone on/off, easily take a backup of contacts, SMS, call log, and it has a glove mode too that’s useful for operating the phone with gloves. 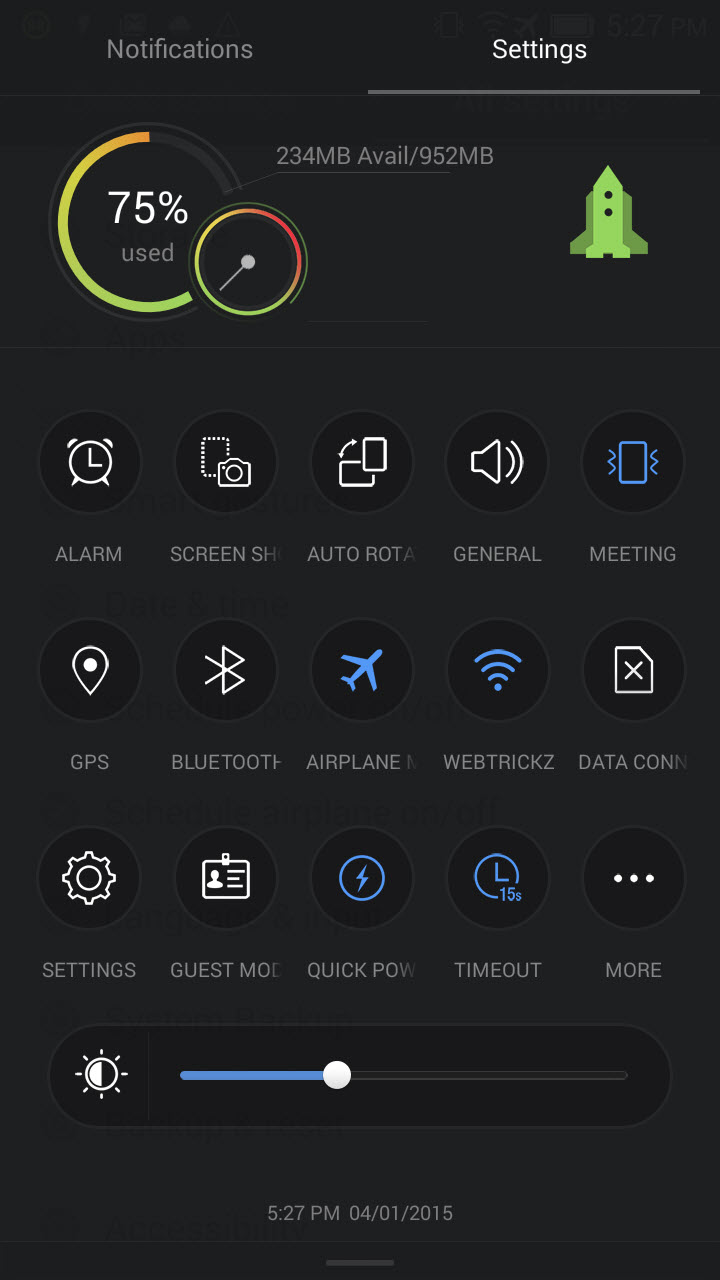 The Gionee Elife S5.1 is certainly a beautiful phone with a slim unibody design, great build quality, quality display and delivers decent performance. The ultra-slimness and lightweight are the crucial factors of this device but all this comes at a premium pricing of Rs. 18,999. The S5.1 is apparently costly as compared to other smartphones but it’s all about style statement. It will definitely impress you if you don’t bother about high-end specifications and want a different looking smartphone. Unlike several other brands, Gionee Elife S5.1 can be bought from mobile retailers offline, so here you’ve the advantage to first check it out in person.