Motorola recently launched the 2015 variant of Moto G in the battleground of 10-15k ($200) price segment phones. As we know, the smartphone market around the sub-15k price bracket is highly competitive, especially in India where a lot of Chinese brands have debuted and are consistently coming up with phones loaded with great specifications at killer prices. We’ve Yu Yureka Plus, Lenovo K3 Note, Xiaomi Mi 4i, Asus Zenfone 2 to name a few that are doing really well in the Indian market. While all these phones feature higher specs and are offered at a tad lower price, Moto G 2015 continues to face the challenge with confidence by keeping itself away from the typical specs race and rather focusing on delivering a quality experience to the end-user. We’ve been using the Moto G3 (with 2GB RAM) as our daily driver for around 4 weeks now and it’s now time to cover various aspects and share our thoughts in our detailed review. 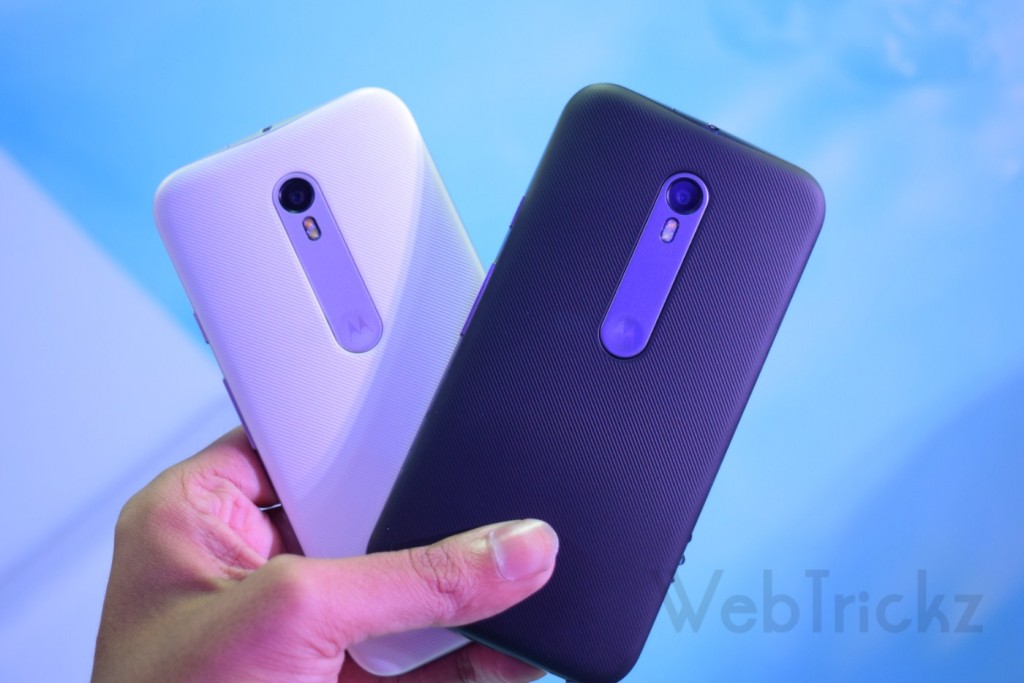 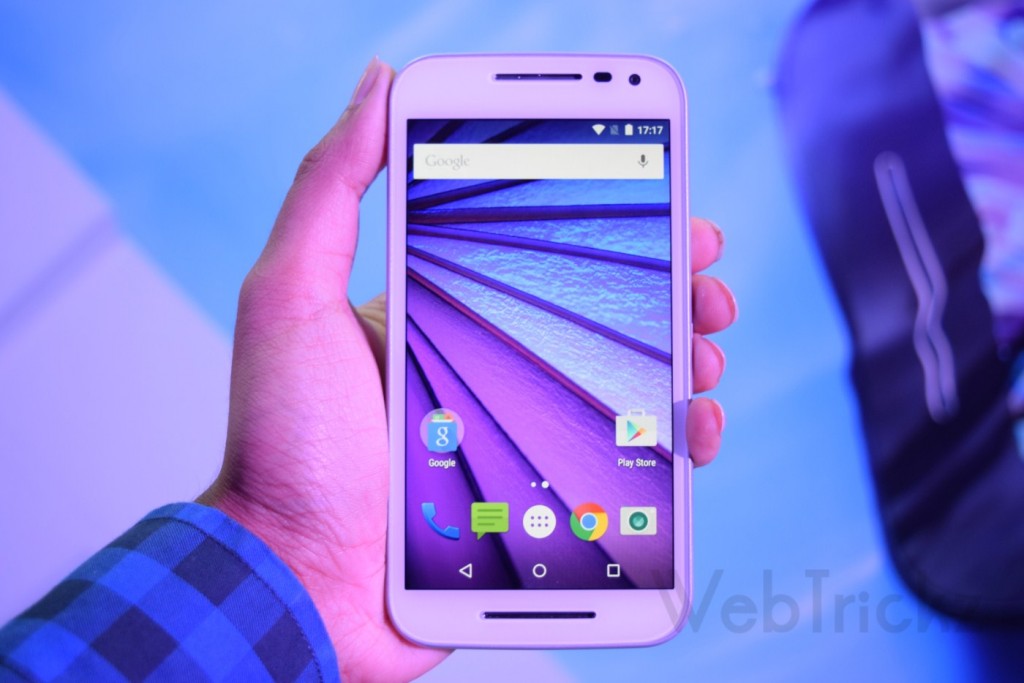 The design language of Motorola devices – the Moto G, Moto E, Moto X has improved only over time and similar is the case with the new Moto G. Moto G 2015 comes with some notable changes in terms of design, thereby featuring a curved back with rounded corners as seen in Moto X 2014 and Nexus 6. The seamless curvature on G3 looks aesthetically beautiful and makes it easier to hold and appear slimmer around the edges. With rounded corners and a well-textured back, the device offers a good grip and fits perfectly in one’s hand. Though the phone weighs 155g and is 11.6mm thick at the center, it doesn’t feel bulky.

The distinctive and unique design feature lies at the back of the G3 where you’ll find a metal strip outshining with a sweet little Moto dimple. This silver metal strip with a smooth metallic finish houses the camera module, dual-tone LED flash, and Motorola logo, overall looks cool and sexy! The vertically curved lower edges contribute to the premium design of the G3 and are something that can’t go unnoticed. Unlike its predecessors, the sides aren’t simply painted white or black rather feature a dark gray (on black) or silver (on white) metallic finish. Moto G3 is the first phone from the G series that is customizable via Moto Maker. Users also have the option to buy Motorola backshells and flip case covers in various colors separately.

The power key and volume rocker are placed on the right side offering good tactile feedback, plus a textured power key is a bonus. The back cover is easily removable/ swappable underneath which you’ll find dual micro SIM card slots, a micro SD card slot for storage expansion, and a non-removable 2470mAh battery. Last but not least – Moto G3 is IPX7 certified which means it can withstand immersion in up to 1 meter of freshwater for up to 30 mins provided the back cover is properly sealed. That’s a superb feature with a capless design that you won’t find in any of the mid-range phones and believe us it works really well. 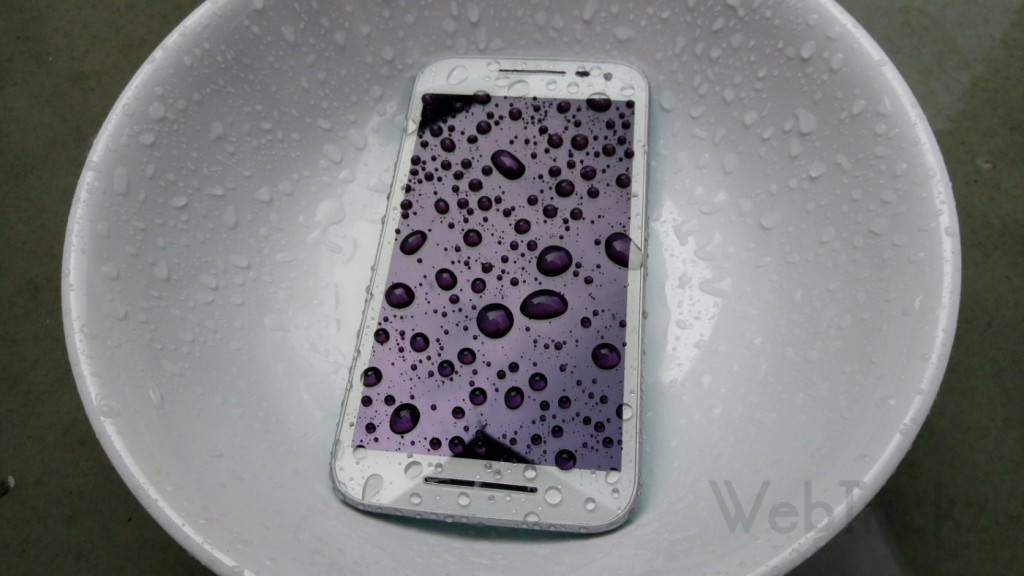 Coming with a 5-inch HD IPS display at 294ppi, G3 doesn’t fail to impress as the display is bright enough with a good contrast ratio and viewing angles. The text appears sharp, color reproduction is accurate and visibility under direct sunlight isn’t a problem too. The touch response is good and we’ve Corning Gorilla Glass 3 here protecting the display. Unlike Moto G2, there is no LED notification light and dual stereo speakers but that’s not a concern as the ‘Active display’ on G3 is smart enough and works great.

Tl;dr: G3 packs a premium design with a solid build quality that will surely last long. 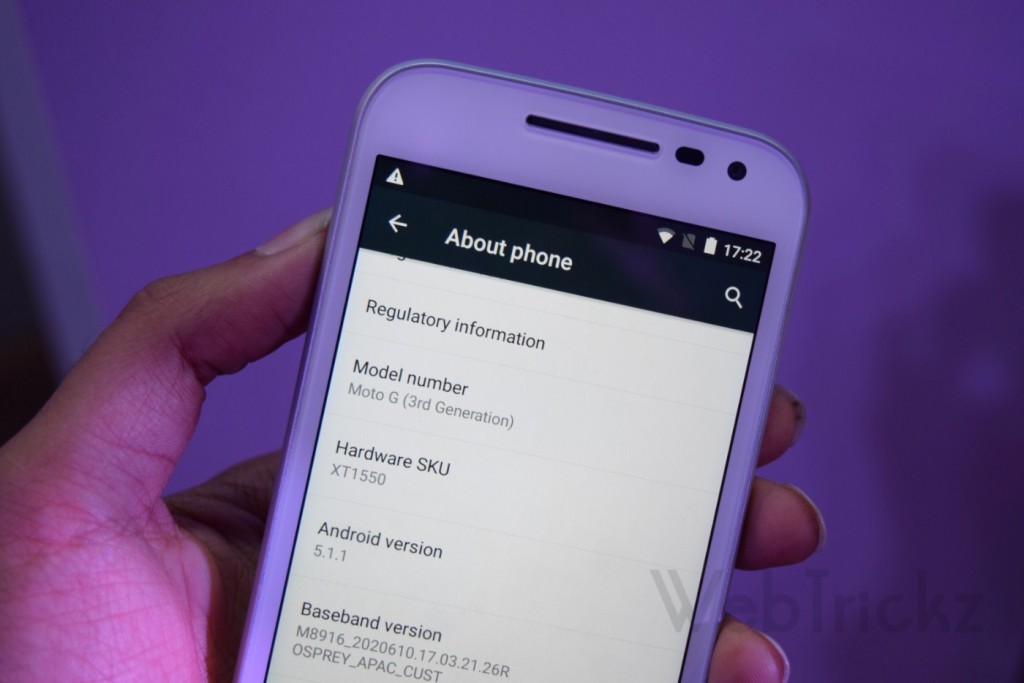 Loaded with a Pure Android experience, G3 runs on Android 5.1.1 Lollipop out of the box which is the latest version of OS to date. The stock Android experience is a prominent and added benefit of owning a Motorola phone as you get the latest software OTA updates soon after the official release. Though Motorola has added a few customizations in the form of Moto apps such as Moto Alert, Migrate, Actions and Display. Moto display refers to an active display that wakes the screen and shows notifications on the lock screen as they arrive or when you pick up the device. Actions include cool gestures such as double chop to power up the flashlight and twist to open the camera. The available space is around 11GB, thanks to the non-bloated UI and apps are movable to an SD card. The software optimization is really good as we didn’t face any lags, app crashes, or heating issues with the device during multitasking and under prolonged usage. 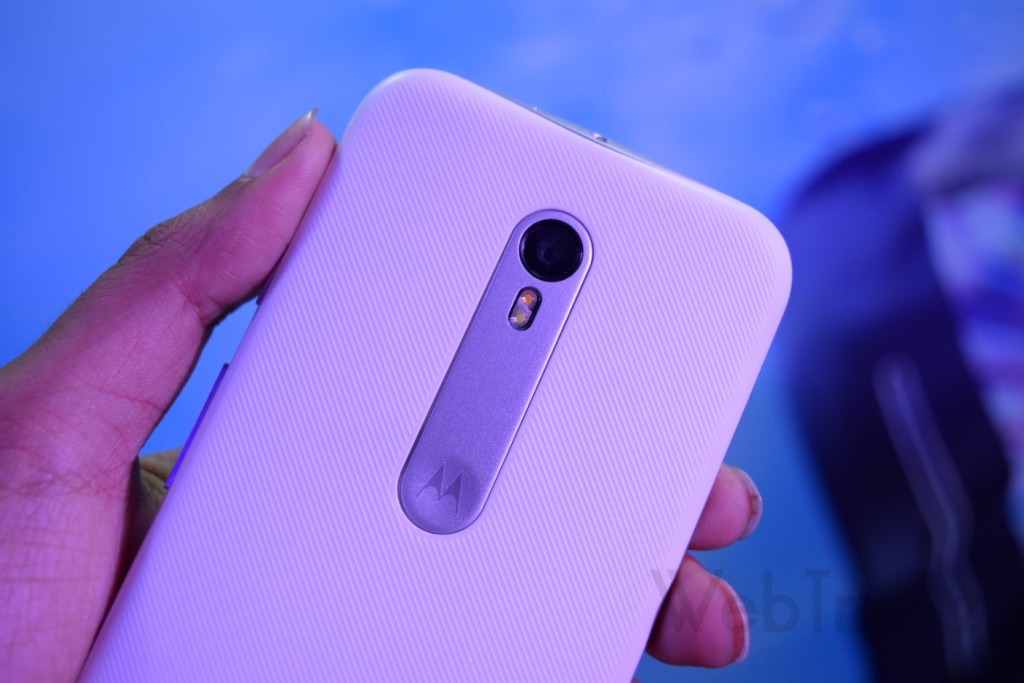 Moto G3 sports a 13MP rear camera with a Sony IMX214 sensor, the same sensor as seen in the high-end Nexus 6. It comes with autofocus, f/2.0 aperture, and CCT dual-LED flash. The camera is snappy enough to take quick shots with a simple tap anywhere on the screen. One can set a focus point and control exposure which works quite well. The camera does a pretty good job in daylight conditions, indoors, and in low-light environments too. The photos captured came out to be impressive possessing natural colors and a good amount of details up to a certain extent. The HDR mode works fine too and slo-mo video recording in 720p is an added advantage. However, in low-lighting or night conditions it might take a while to focus the subject. Capable of 1080p video recording at 30fps.

Coming over to the front camera, it’s a 5MP one that one wouldn’t complain about. The selfies came out to be really good when captured during daylight or artificial light. The front camera supports HDR mode and 1080p video recording too so you can make video calls.

Do check out various photos below taken with Moto G3 in different conditions. Tip: To view photos in a bigger size, right-click on an image and select ‘Open image in new tab’ while viewing it in lightbox image viewer.

Moto G3 is powered by a Snapdragon 410 Quad-core processor (MSM8916) clocked at 1.4GHz which is the same SoC as seen in most of the entry-level phones including Moto E 2015 (4G). However, Moto G 2015 is clocked at a higher frequency of 1.4GHz as compared to others with a 1.2GHz clock speed. The SD 410 chipset coupled with Adreno 306 GPU and 2GB of RAM may look short on paper but it doesn’t fail to impress and we mean it! The near-to-stock Android OS is optimized so well with the provided hardware that we didn’t encounter any lags even when 20 apps were running, making multitasking a breeze.

The gaming experience is solid too as graphic intensive games like Asphalt 8, Real Racing 3, and Dead Trigger 2 ran smooth but with a few stutters during elongated periods of gaming which is expected given the processor. The device runs butter smooth while using frequently used apps such as Camera, Gallery, Google Chrome, Facebook, WhatsApp, Twitter, Instagram, etc. that account for everyday usage. Summing up, we’re impressed with the fluid experience on G3 in terms of system performance, web browsing, video playback, and gaming without any issues. We recommend you to opt for the 16GB variant of G3 with 2GB RAM as the price difference is negligible but it’s worth it!

Battery backup is one of the most important factors that users should consider while looking for a smartphone and it’s something that can decide the fate of a device that one wishes to last all day long. No one would want to have a phone featuring killer specs but with mediocre battery life. Worry not, G3 has got you covered! Coming with a 2470mAh non-removable battery, the G3 consistently lasted for an entire day under heavy to moderate usage. We were able to get a screen-on time of 5-5.5 hours in a couple of our tests which is sufficient for users with a normal usage pattern. The HD display and smartly optimized software probably help the G3 in delivering a very good battery life. 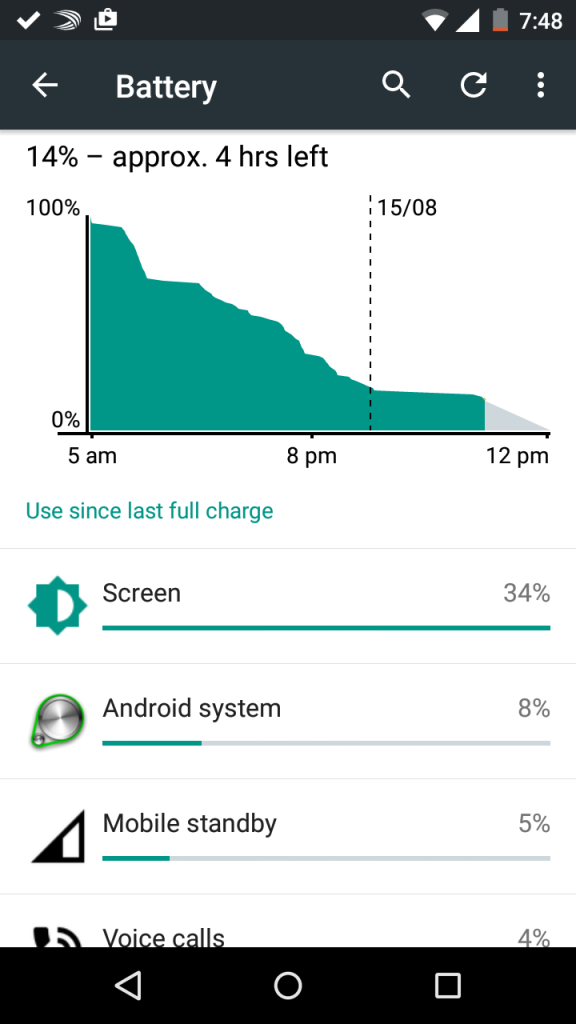 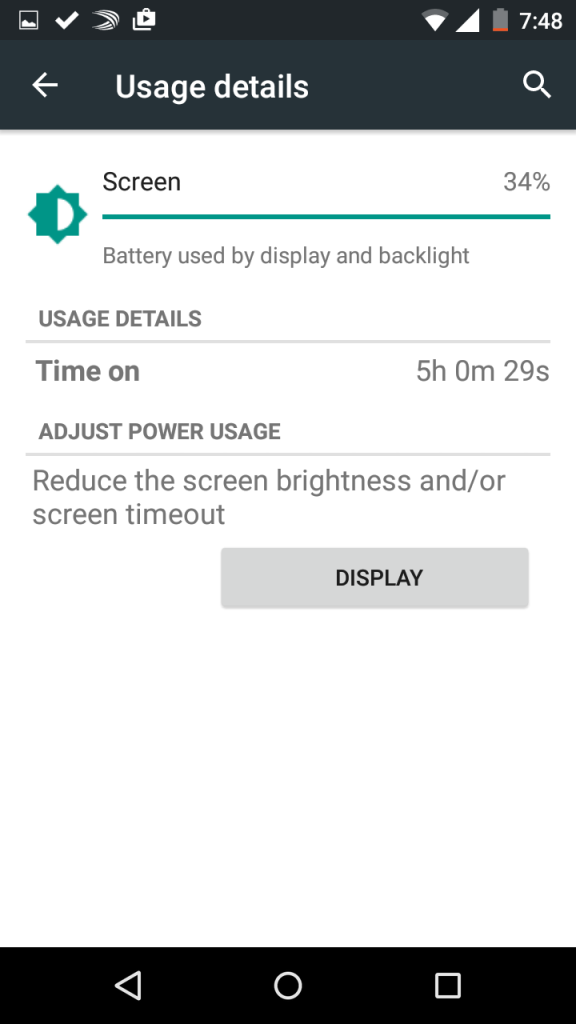 Keep the specs comparison aside and consider the overall user experience, you’d only think of Moto G3 which starts at a price of 11,999 INR. Though we’ve several options in the sub-15k price range, G3 stays out of the league. The reasons are the associated brand i.e. Motorola, a superb phone with a compact form-factor, premium design, IPX7 rated, solid all-round performance, customization options, and moreover a near-to-stock Android OS eligible for the latest updates. Moto G3 is a perfect buy for common users who prefer a decent mid-range phone for everyday usage that doesn’t derail after a period of time and can get reliable post-sales service. As said earlier, G3 is an overall BFF and a bang for your buck!