Get rid of portrait mode or background blur effect on Snapchat in iOS 15.

iOS 15’s Portrait mode for FaceTime is a seamless way to blur the background while keeping yourself in focus. It works similarly to the portrait effect in the camera app on iPhone and iPad.

Using Portrait mode, you can seek attention to your face and body while adding background blur to the rest of the frame. Besides FaceTime, these effects seem to work with third-party apps too, like Snapchat.

How to use iOS 15’s Portrait mode in Snapchat

Portrait mode on Snapchat in iOS 15 doesn’t work out of the box, and neither you will find a setting to enable it within the app. Also, note that the portrait effect only works while using the front camera.

To enable portrait mode on Snapchat in iOS 15, follow the steps below.

In addition to video effects, tap the “Mic Mode” panel to apply audio effects to Snapchat video calls. While the default option is Standard, you can either choose Voice Isolation or Wide Spectrum as the audio effect. 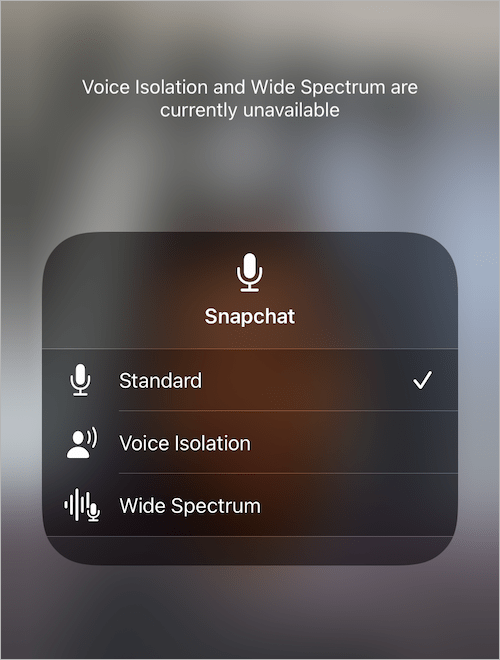 How to turn off Portrait mode on Snapchat in iOS 15

How can I turn portrait mode off on Snapchat?

The portrait effect on Snapchat in iOS 15 isn’t turned on by default. In case you have accidentally enabled it and want to get rid of the blur on Snapchat then that’s possible.

To remove portrait mode from Snapchat on iPhone running iOS 15,

That’s it. Now head back to Snapchat and capture photos or videos without any background blur.

How to turn Focus mode on or off in Snapchat

The Snapchat app also packs a Focus mode to apply the bokeh effect and it works both with the front as well as the rear camera.

Although, Portrait mode (in iOS 15) gives relatively better results than the native Focus effect in Snapchat. That said if your iPhone doesn’t support iOS 15 then you can instead use Snapchat’s Focus mode.

To enable Focus mode on Snapchat,

Refer to the screenshot below to toggle the Focus effect on older versions of Snapchat.