Use Back Tap or add a shortcut to your iPhone Home Screen to activate the flashlight.

How to Turn On/Off Flashlight on iPhone 13

There are several ways to turn the flashlight on or off on the iPhone 13, 13 mini, 13 Pro, or 13 Pro Max. Besides iPhone 13 models, you can use the below methods on Face ID-enabled iPhones including iPhone 12, iPhone 11, iPhone XR, XS, X, or an iPad Pro. Let’s get started.

TIP: It is also possible to adjust the brightness of the flashlight. To do so, simply press and hold the Flashlight button in Control Center and drag the brightness slider up or down.

NOTE: By default, the Flashlight control is present in the Control Center. However, if you cannot find it then you might have accidentally removed it.

To get the flashlight back on Control Center, go to Settings > Control Center. Under ‘More Controls’, look for the “Torch” control and tap the + button alongside it. The Torch will now move to Included Controls where you can reorder to change its position.

The iPhone lets users access the flashlight directly from the lock screen. This makes it relatively easy to turn on the flashlight on iPhone 13 without the need to first unlock the device.

To turn on the flashlight from the Lock Screen on iPhone 13, follow the steps below.

How can I remove the flashlight from the Lock Screen?

Unfortunately, even in iOS 15, Apple hasn’t introduced a setting to remove the flashlight from the lock screen. We personally prefer such an option as at times the torch turns on itself when the iPhone is in the pocket.

Just like various other tasks, you can simply use Siri to toggle the flashlight on or off.

To do so, launch Siri either by saying “Hey Siri” or pressing the Side button on your iPhone. Then use one of the below voice commands to get the task done. 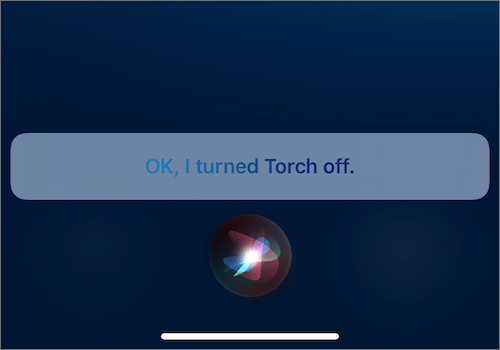 How to put the flashlight on iPhone 13 home screen

To add a flashlight shortcut to your iPhone home screen on iOS 15,

To enable or disable the flashlight, simply tap the Flashlight shortcut icon on the Home Screen.

Turn the torch on or off using Back Tap

The “Back Tap” functionality (an accessibility feature) in iOS 14 or later lets you take a screenshot or lock the screen with the Back Tap shortcut.

Here’s how you can turn on or turn off the flashlight on iPhone 13 by tapping the back of your device.

Do tell us which method you like the most in the comments below.

How to Display Battery Percentage on iPhone 13 and 13 Pro

Here's how to Screen Record on iPhone 13 and 13 Pro